The year in Palestinian hip-hop

The Palestinian hip-hop scene released a broad variety of productions in 2013 that are pushing the genre to another level. 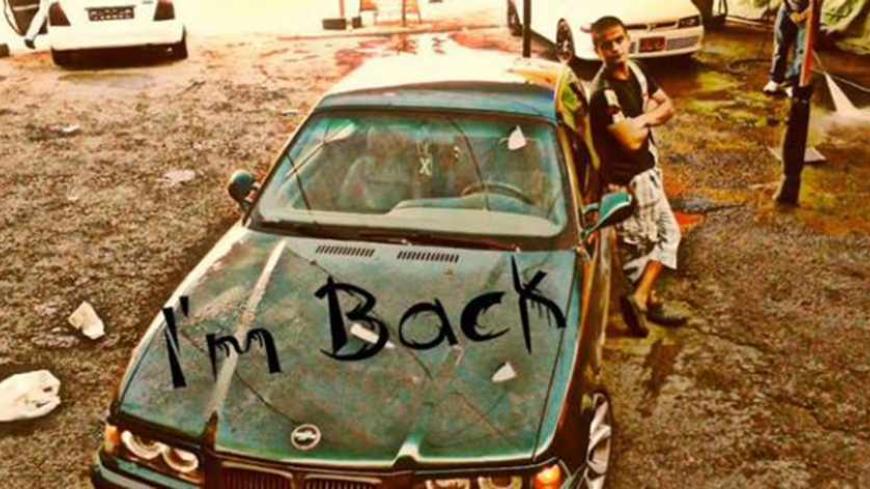 Hoss Basha takes listeners to his neighborhood in Nazareth in his upcoming album "Made in Safafri." - YouTube

“Hip-hop is not dead, it lives in Palestine,” reads a popular T-shirt design. Indeed, 2013 proved that the Palestinian hip-hop scene, one of the first in the Middle East, is alive and kicking. Both its godfathers and newcomers released a broad variety of hip-hop productions that are pushing the scene to another level.

Producer Anan Ksym, 28, along with his organization Mazaj Productions and the UG Records label, stood out this year. Ksym is himself a rapper from the group WE7 / Wlad El 7ara, which he established in 2001 with fellow rappers Alaa Bishara and Adi Krayem. Their last album, “Wednesday,” which was released on YouTube on Dec. 6 before their split, was the result of a collaboration project called "Kayaan" with the Swiss composer Christian Mueller. This “Arabic jazz-rap” album is one of the most innovative of the year.

Soon after Ksym built his own studio in the basement of his family home in Nazareth, aspiring young emcees started to ask for beats and mentoring. Today, Ksym has a full entourage of promising rappers and musicians under his wing.

One of them is Hussam Ikbarey, 16, better known as Hoss Basha — the Eminem of Palestine, according to Ksym. Ikbarey considers the hip-hop icon a “rap God,” and he resembles the young Eminem both in physical appearance and style. Moreover, he is an incredible freestyler. His upcoming album, “Made in Safafri,” takes listeners to his neighborhood in Nazareth — one of the most impoverished, drug-infested and crime-ridden cities in Israel — where Ikbarey works after school at his brother’s car wash to support the family.

“I see that my community is in deep, and I don’t want to be connected to that. I want to change that,” he said.

Hoss Basha is a mix of raw talent, dedication and intelligence. He speaks for Palestine but from a personal place. He plans to release his debut album mid-February.

Ksym also produced the album "Talea Min Ghetto" for the hip-hop veteran Murad Abo Ahmad, which UG Records released in July. He joined forces with another veteran, Tamer Nafar from the group DAM, on the song "Super Lancer," which is based on the instrumental from "Black and Yellow." In the video, which is produced by Mazaj, the two proud emcees cruise in a Mitsubishi Lancer through Nazareth. No “bling,” just two emcees and clever, satirizing punch lines about the most popular car among the shabaab (youths) in town. This has to be the best music video of the year.

Nafar is himself a hip-hop powerhouse from the city of Lid. Since DAM released their second album “Dabke on the Moon” in December 2012, Tamer Nafar, Suhell Nafar and Mahmoud Jreri have toured abroad and within the country. But both Tamer Nafar and Jreri are already back in the studio with Ksym, working on their own solo albums. Jreri is working with local rock musicians; Nafar is trying out rhyming in English. The two renowned lyricists say it is time to bring out the honest personal narratives in Palestinian hip-hop music.

“I don’t think DAM is ready to do anything new before we each put out our own personal stuff,” said Nafar who is also working on a feature film about the birth of hip-hop in Palestine, building on his own experience.

The hip-hop godfather and father of two is also bridging hip-hop and activism. In November, he and the Madaa Silwan Creative Center in East Jerusalem opened a studio where Nafar produces music with young locals who rhyme and sing about life in their neighborhood of Silwan and their conflicts with Israeli settlers there.

“We are not doing this to make them musicians but to give them their childhood back,” said Nafar, who also made a song for the re-establishment of the demolished Bab Al-Shams village in east Jerusalem.

Like many Palestinian hip-hop artists segregated from one another, Nafar is a proud music collaborator. He most recently worked with the Palestinian-Syrian group Refugees of Rap on the track "Ahkee" ("Speak Up"), which talks about the experience of four rappers from Yarmuk refugee camp in Damascus who lived with the threat of death until they escaped Syria earlier this year. Their upcoming album “Age of Silence” features 20 songs that reflect on life before and after the Syrian uprising, the outbreak of the war and the impact on the Palestinian minority.

The scene in the diaspora is also alive and kicking, from Katibeh Khamseh and DJ Osloob in Burj el-Barajneh refugee camp in Lebanon to the Sao Paulo-based Gazan emcee Mohammed Antar, who created "Antara 2013." The emcee Khotta Ba, or Majd Kamal, released his excellent debut album "Al Tatweer Al 7adari" in July 2012 and worked with Talbeyah MCs, two passionate 16-year-old rappers from the Palestinian refugee camp Talbieh in Jordan whose album will soon be made available on bandcamp.com.

On the other side of the Jordan River, the emcee and music producer VJ and DJ Boikutt released his first solo album "Hayawan Nateq" in Ramallah in November. With this album, the artist who was part of the former group Ramallah Underground pushes the sounds of the genre in new directions with his experimental, often dark, intense electronic beats and lyrical compositions — undoubtedly the most daring album of the year.

Also in Ramallah, the MMD label, founded by emcee and producer Rami GB, will release a collaboration album titled “Mizrap”  on bandcamp.com during the first week of 2014. It will feature 15 Palestinian artists from Gaza, the West Bank, Jordan and Europe. It includes a track with Shadia Mansour, whose debut album is also expected in 2014. She has actively collaborated across the region and has steadily been dropping songs such as “We Have to Change,” featuring Syrian-American Omar Offendum.

Another hip-hop project to watch for in 2014 is Al Falastine. Mohammed Mugrabi, an emcee and music producer from the former group G-Town in Shufat refugee camp in east Jerusalem, has gathered four rappers from the West Bank for the collaboration.

In Dheisheh refugee camp in Bethlehem, the three emcees Mohamad Azmi, Hisham al-Iham and Diya Milhem from the group Palestine Street are working with young talent in the camp and producing their debut album.

New album releases from more veteran emcees are in the works. PR-Palestinian Rapperz from Gaza is releasing a new album in March, and Saz from Ramle, who released “Min Yoom" ("Since that Day") in September, is also back in the studio working on an album in English.