Janne Louise Andersen talks to the band about the controversy over a song about honor crimes, their new sound and a decade of "hip hop Arabi.” 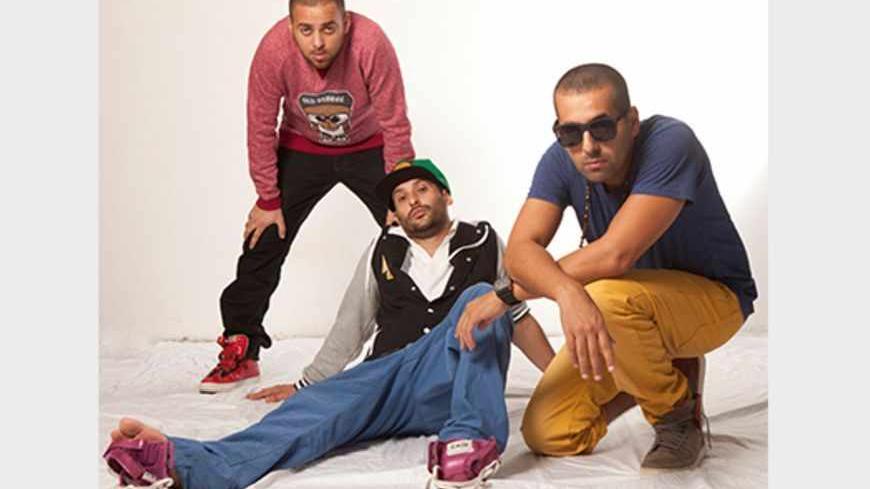 DAM, a group of Palestinian rappers, recently went on tour with their new album, Dabke on the Moon. From left to right: Tamer Nafar, Suhell Nafar and Mahmood Jrere. - DAM

From Haifa to Ramallah, New York to San Francisco, the three Palestinian rappers from DAM have been busy promoting their new album Dabke on the Moon. But this time, more than a decade after first mesmerizing young Palestinians with political rhymes against Israeli oppression, the musicians have sparked criticism from an unlikely group — liberal Palestinian academics.

Their fans have been waiting six years for the release of their new album, which is full of danceable messages from the three wise men of Arabic hip hop. But the emcees have directed some of their new lyrical criticism to oppression in Palestinian society. The song “If I Could Go Back in Time” condemns forced marriages and killing of girls, causing some to say DAM (which means blood in Arabic and doubles as an acronym for Da Arabian MCs) has been seduced by “honor crime.”

“Women in this song are decontextualized victims of their culture, to be championed by young men with enlightened views, and by foreign intervention and international aid,” wrote two anthropologists at Columbia University, Professor of Gender Studies Lila Abu Lughod, and PhD-candidate Maya Mikdashi, on Jadaliyya.com on Nov. 13, 2012.

The writers called themselves disappointed fans and said DAM was not providing political and historical context to the problem and the term honor killing, which they said, in Palestine can be attributed to a score of historical reasons, and is impacted by the Israeli occupation. They were also greatly skeptical of UN Women’s financial support for the song’s video. “The music video faithfully follows the script of an international campaign against the so-called honor crime. The ‘honor crime’ has a history in the UN.”

The three rappers were shocked.

“They criticized that we put our dirty laundry out to the world,” said Mahmood Jrere of DAM, in an interview with Al-Monitor in New York in April 2013. “I didn’t expect it to come from academics who are actually fighting the same fight. I expected it from common people.” (One month after the critical article, DAM responded with a written defense on Jadaliyya).

“If we want to be honest with ourselves as artists, we need to target taboos in our own society.” Jrere told Al-Monitor. “I don’t care what the West will think about it, but whether I will make a change or not.”

Jrere recalled that after the song was played on an Israeli radio station, an Israeli woman called in and applauded the video she had seen online. She said she knew two Jewish women who had been killed by their families.

“They want us to focus on the Occupation, but the political and social struggle should go together and not be separated,” Jrere said. He cited the song, “Tell Them It’s Your Classmate” as another song that addressed Palestinian youth.

“When you are talking to your boyfriend on the phone and your dad asks who you are talking to/ tell him it’s another girl from class/ Don’t think twice, lie,” the song begins. Jrere said everyone did that growing up and now it’s time to face it. “Academics left the stage for people to change public opinion. If academics from al-Lid or Yafa came clear against these problems, they would be able to influence. We are trying to fill the vacuum and bring people to help us.”

A Decade of ‘Hip Hop Arabi’

On a mild October night in 2001 in downtown Nazareth, DAM was shocked at the size of the audience at their first show on an outdoor stage in the city center.

Jrere had no idea DAM had so many followers. Up until that concert, he had been performing with his cousins Tamer and Suhell Nafar at friends’ parties, weddings and small concerts in their hometown Lid, a 30-minute drive from Tel Aviv.

The crowd in front of the stage was mostly young, including two teenagers who were about to see their first hip-hop show in Arabic. As the three men started to rap and their vigor was absorbed by the audience, it was like a beam of light from the sky had hit those two teens, who would ultimately go on to form their own hip-hop group, Walad el 7ara (Boys from the Hood).

“Hip Hop — Arabi,” Tamer called out. “Hip Hop,” he called again and the audience responded with a resounding “Arabi!” And just like that, in one concert, Arabic hip hop emerged as the reality of a new generation of Palestinians.

DAM’s lyrics articulated the experience of being a Palestinian minority inside a Jewish state. Their style was baggy pants and keffiyehs. DAM immediately caught the attention and praise of young Palestinian citizens of Israel, and their sound rapidly spread through the West Bank and Gaza to refugee camps in neighboring countries and throughout the Arab World.

“It doesn’t feel like it’s been so many years, but now you see people in the shows who were nine years-old [when we started] and now they are 20. It’s a whole generation growing up on DAM music,” Jrere told Al-Monitor in the April interview  in New York.

But Jrere, 30, Tamer, 33 and Suhell, 29 have also grown up, as have their artistic ambitions and aspirations for the Palestinian hip-hop scene.

“Dedication [their 2006 album] was an album where we told the facts, Dabke on the Moon is more like a feature film where we tell stories,” said Jrere. “Musically and lyrically each album reflects a different age.”

It has been a long ride to the moon, and DAM’s musical journey travels through various universes of sound.

The main producer on the album is Tamer and Suhell’s cousin, Nabil Nafar, a Danish-Palestinian producer who came to al-Lid and worked with them on six tracks.

In the track “A Letter From a Prison Cell,” DAM worked with the renowned classical oud players Trio Joubran and the Lebanese percussionist Bachar Khalife (the son of legendary composer and oud player Marcel Khalife.) The result is a melancholic non-traditional hip-hop song heavily influenced by classical Arabic composition and instruments.

Abed Hathut, a Palestinian composer and bass player in the rock band Khallas and the British producer Tam Cooper  produced the R&B influenced song “I Fell in Love With a Jew,” and the 80s old-school hip-hop track “Handcuff Them War Criminals” is full of scratches and police audio samples. On “Why,” they worked with Mark Antoine, the producer of Raï music artist Cheb Khaled.

“It’s colorful but we still kept our Arabic identity inside,” Jrere said. On most of the tracks they have added live violins and oud and invited several Arab featuring vocalists such as Algerian Rachid Taha and Palestinian Amal Murkus.

Dabke on the Moon

And then there’s the title track “Dabke on the Moon.” It’s the main dance track of the album, on which Palestinian producer Jethrobeats fused dabka and techno. Tamer says that fans cry to hear the song over and over again at concerts.

But it was initially meant to be a sad song.

“How come we are digging tunnels and they are reaching outer space?” Tamer thought to himself after reading an article about NASA exploration in space followed by one about tunnel-digging in Gaza. The contrast really bothered him, and lyrics started to flow out of him.

“How come I am not taking off/ I am pushing the pedal, pressing the right buttons, reaching my hands out of the window/ But still can’t touch the stars.” And then uprisings across the Middle East erupted, which changed the song’s mood to a more defiant one.

“So I look at the screens, and I see we are overweight/ so I throw out all the corrupted leaders and their censorship/ Look at the screens again and see we are missing fire/ So I burn all of their dirty money/ And if we still can’t fly I will use our books as wings.”

While illustrating how Palestinian society will never progress while being under the Israeli Occupation and repressive politics, the song also became the personal story of DAM’s own struggle to excel artistically.

Living as a minority inside Israel (and especially as artists so critical about the state,) art subsidies or grants are not an option. And even if they were, DAM, who supports the Boycott, Divestments and Sanctions campaign on Israel, would not receive them.

So the three rappers used their savings and all the help they could get from friends and colleagues and when the outline of the album was there, they reached out to their loyal fanbase on Indiegogo and raised almost $14,000.

And while the group is very grateful for the support of their fans, they worry about being pigeon-holed as purely political. It’s not just the academics who expected DAM to be activists. So far the group has not had any music critics review their latest album, and interviews were focused on politics often including the question of “how to solve the conflict.”

“As much as I am doing political songs, it’s not my only identity,” said Jrere. “We love to be entertainers as well; any one in our audience can see that.”

DAM performed at The Shrine in New York City in 2011. Photo by Janne Louise Andersen

Any given DAM concert is loaded with jokes, high energy on stage and involvement of the audience, sometimes provocation. Which is the case with the satirical song “I Fell in Love with a Jew.”

“It explains the situation where we as Israelis and Palestinians are stuck in this elevator where Israel is going up and we are going down,” Jrere said.

“She wanna be a pilot/ Search the sky/ My dream is not to be searched every time I fly,” Tamer rhymes, referring to Ben Gurion Airport in Tel Aviv — the next destination of the spaceship before it starts the European leg of the 2013 tour.