A new generation of musicians like Mike Massy is openly challenging the “plastic-surgery obsession and glam life” of the country’s thriving pop scene with their lyrics and performances. 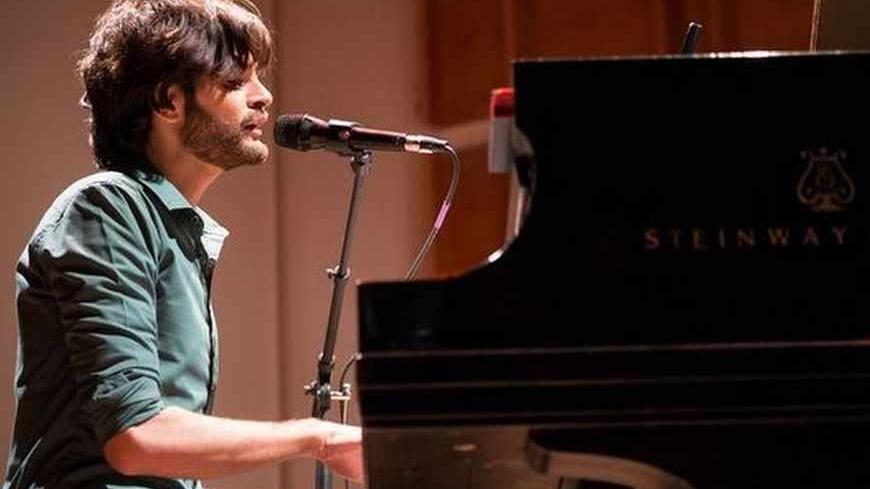 Lebanese musician Mike Massy is among several trying to bring their sound to the mainstream. He made his US debut at Merkin Concert Hall in New York on April 25, 2013. - Joe Chahwan

The last decade in Lebanon has seen a diverse alternative music scene growing and juxtaposing itself to the "ya habibi" pop scene, plastic surgery obsession and glam life of Beirut. That contrast is evident for the new Lebanese hip-hop and rock scenes, but the alternative pop scene also takes a stand. Mike Massy, Zeid Hamdan, Semitic Genetic and Yasmine Hamdan are just a few names delivering new sounds and purposes to Lebanese pop, one of the most successful music industries in the region.

When Mike Massy won The Innovation in Music Award, Murex D'or, in June 2012, he accepted the honor bare foot, which was highlighted by a close-up on MTV Lebanon. He then performed his song “Jazr w Mad” with a dance ensemble. The posh audience watched Massy skip, sway and swing across the stage with raised eyebrows that eventually gave way to vigorous applause.

On April 25, he encountered a similar audience during his US debut at Merkin Concert Hall in New York City, where he introduced “Ya Leila Ya Eini.”

“In my country men are strong and drive fast cars,” proclaimed the skinny singer with his gracious gesticulations. “And all around Beirut, libertine women dance in the clubs while, on the other side of the street, another kind of woman lives a very different life. Their only way to escape poverty is by marrying a rich man.”

Then, Massy started to sing, impersonating one of these women, occasionally hitting very high notes.

Again there were raised eyebrows among the predominantly Lebanese-American audience. At one point during the performance, a woman yelled that Massy was airing Lebanon’s dirty underwear.

“That’s why I try to be an artist, because someone has to say those things out loud,” he retorted to an audience who nodded in reply and eventually ended the concert with a standing ovation.

“They didn’t know if they liked it or not. But slowly they allowed themselves to go with the flow,” he told Al-Monitor in an interview after the show. “The fact that they see me enjoying my performance opens their spirit to allow themselves.”

Massy’s innovative sound, which lies somewhere between pop, jazz, oriental and traditional, is a product of his varied experience. He studied piano at the National High Conservatory of Music in Beirut where he was also trained in oriental and occidental singing, the muwashahat [a classical arabic music vocal form that originated in Andalusia] and Arabic opera. This training combined with a degree in drama and dance as well as his love of pop music makes Massy an eclectic artist who pushes the boundaries of the Lebanese music scene.

And at the center of this, some say, is plastic surgery and habibi love songs — which make Massy cringe and turn off the radio.

As an antidote, he wrote “Khalastna Ba’a.” In the music video, Massy tells a bald mannequin, who represents the prevalent silicone and botox trends, that he is “fed up with love and emotions.”

“I was making fun of myself,” he said. “I am Middle Eastern, I’m dramatic and my favorite word is habibi.”

As with the word habibi, Massy has a hate-love relationship with Beirut. “It’s painful to be in it and painful to be far from it,” he said.

Born in 1982 during the Israeli invasion of Beirut and having lived through the civil war and the Israeli invasion in 2006, Massy said he never knew the beautiful and tranquil Beirut that the Rahbani Brothers describe in their music. In his own ode to the city (it seems every Lebanese musician must do one), he sings that he hopes to see this fantasy Beirut come true.

Until then, Massy keeps telling the real stories of love and conflict in a city obsessed with escaping exactly that.

And he is not alone.

“Alternative music scenes have existed for years, but now artists are being more daring to reach the mainstream,” he said. “I am proud and happy to see that. We should give another image of the cultural scene.”

Self-irony, humor and real life testimonies from the non-glamorous side of Lebanese life seem to be characteristic of the new generation of alternative Lebanese musicians.

One such group paving a path in this scene is Semitic Genetic, a new pop-rock music project by Julian Cassia and Karim Choueri, who are currently working on their debut album. They are collaborating through cyberspace, with Choueri in his studio in Mansuriye in Beirut and Cassia from his studio in Brooklyn, New York.

The album will feature songs called “Chemical Peel” and “NRPF” (National Republic of Plastic Fanatics) which satirize the plastic surgery trend and the brain drain of Lebanon.

“I fly to Canada or elsewhere if I can / I’ll get an education and a life that I can claim / All of this hate has made me blind to soaking rays of our sun / The new republic of plastic fanatics,” are one of the many lyrics alluding to this phenomenon.

“People are totally held back,” said Cassi. “Unless they have the opportunity to f--- off to Canada they just suck it up … And if they revolt, it's short-lived and once the dust settles, it's business as usual.” Still, he said the project is, at heart, patriotic.

“All this angry energy takes our attention away from the more fertile elements of what our land could be,” Cassia, who has chosen a life outside of Lebanon, said.

In addition to making good music, he wants to articulate truths about Lebanese society, and along the way, highlight and remember some of the mores aspects of the society.

Zeid Hamdan, a pillar of the Lebanese underground music scene, is another voice working to steer the music scene away from the “ya habibi” genre.

His mission when making his own music or producing others is not to turn them into Lebanese superstars. “Stardom is a state of fantasy, it has nothing to do with the quality. We have so many Lebanese pop stars who don’t say anything about the music,” he said in an interview with Al-Monitor in Beirut in November. If I want to be recognized as someone, it’s for moving people through songs, words and ideas that never die. If I do that, then I consider myself a star.”

Hamdan is the owner of the label Lebanese Underground and has produced various film scores, the Palestinian-Lebanese hip-hop group Katiba 5 and Egyptian singers Mariam Saleh and Maii Waleed.

Hamdan says that although he sees more varied artists coming out in Lebanon, the infrastructure to support them is still weak.

“I can count other producers on one hand, but the few elements we have give you hope,” he said, citing 24 Records and Forward Records.

Yasmine Hamdan, who was part of the band Soapkills with Zeid Hamdan, has since broke out on her own — and is another trailblazing Lebanese musician who steers away from plastic pop. She released a new electro-folk pop album in April inspired by old classical Arab female singers, whom Yasmine became fascinated by when she was a teenager in Beirut. Their mischievous sensuality and the subtle, ironic social criticism made an impact on her.

“Through them I was able to reconstruct my own narratives,” she said in an interview with Al-Monitor on May 3. “I think as an artist you have to be engaged. You are responsible for your choices and for your ethics. I take it very seriously.”

This sentiment is one that many of these emerging Lebanese artists echo. Mike Massy, for one, said he is happy to see his country’s rich popular music evolve from just “ya habibi” to a more nuanced sound.

“The alternative scene has existed for years, but now [we are] daring to reach the mainstream,” he said. “We should give another image of the cultural scene.”