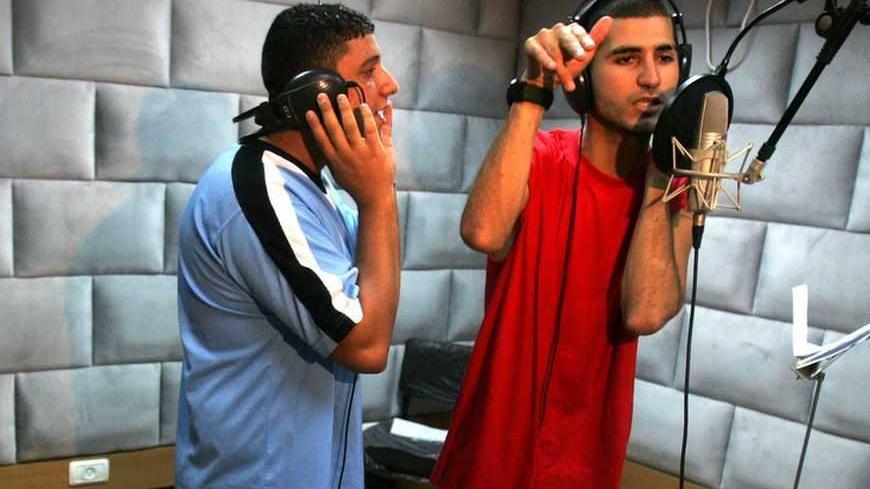 GAZA CITY, Gaza Strip — Mohammad Antar is a 26-year-old rapper. For over a year, Mohammed has been practicing the songs he has written in front of the mirror. He will be lucky if he even gets a chance to perform them during an "underground" concert, with only his friends as the audience.

However, 15 months have passed since he last performed on a stage or before an audience.

Antar told Al-Monitor, "We are required to obtain permits from the ministries of interior and culture and the police in order to be able to hold a rap concert on any stage or theater. It is impossible to hold concerts without a permit.

"I spent hours in front of the mirror, singing, dancing and recalling the memories of my concerts in Europe in the summer of 2010, where I performed in many European cities. However, I could not perform in Gaza."

Another rapper, 20-year-old Ibrahim Ghneim, said that the Interior Ministry prevented him from holding three rap concerts in 2012. However, in 2011, he managed to perform as one of the acts during a large commercial event that had paid taxes to the government. His act lasted only a few minutes. "This is the only way for me to fight for rap and for my art. By performing at a commercial event, I can circumvent the decision to ban rap. However, if I wanted to hold an entire rap show, I need a permit. Obtaining a permit could take forever, and my application would most likely be denied," Ghneim said.

However, Antar refuses to perform his songs in upscale venues, where people must pay to hear his music. He believes that rap is an art associated with and nurtured by the poor. How could he perform for such a  social class that is not interested in listening to lyrics that criticize politics and the community? Antar believes that rap will only survive in the streets, where it belongs.

Antar, who was dressed in bright colors with iPod headphones on his ears, turned heads as he walked into the cafe. However, appearance is not important according to him. What matters is the singing, the lyrics and their impact on society. For this reason, he changed his much-criticized haircut and the way he dresses. Antar believes that what truly matters is to become closer to society. Yet, he refuses to accept the government's conditions, as this entails recognizing rap to be a pornographic show that must be banned.

Antar has become so frustrated that he stopped writing and recording songs, despite his rich history in rapping. From 2009 to 2011, Antar recorded five albums, some solo, others in collaboration with a band called DARG Team. He also held dozens of concerts, before the permit application and the decision to ban rap.

Ghneim was wearing jeans, a blouse and an exotic hat that drew attention. "Our artists are invisible people. It's rare for people to come up to me to tell me that they admire my art, or that they have seen a video of mine," Ghneim said.

The young rapper does not deny the fact that some wannabe rappers and copycats have tarnished the image of rap. He stressed that in Gaza, artists are constantly subjected to moral judgment. They are never judged by their creativity and are criticized more than others for their actions.

Ghneim recalls when he was suppressed for the first time on April 25, 2012. "I was supposed to perform at Rashad Shawa theater. However, a few hours before the show, I was beaten by security officers along with my bandmate, Ahmed Labad, in a bus belonging to the security apparatus. They broke my arm and leg and my partner's arm as well.  At the time, I was scared to inform the audience and the media of what truly happened. So I refunded the people's tickets, putting myself deep into debt. My father, however, paid all my dues," Ghneim said.

He added, "Today, I am no longer afraid. I realized that rap is my vocation, especially after having spent a year in Egypt recording a video clip with an Egyptian band for a song named "Id fi Id" ["Hand in Hand"]. The clip was broadcast by several satellite television channels. This is when I realized that I truly have talent and my artistic path was not mere coincidence."

Antar was also suppressed. He was summoned and detained at the security headquarters in Gaza. Antar told Al-Monitor, “I was summoned five times, most recently in October 2012. On two occasions I was summoned because of rap. Security officers asked me who writes my songs and pays for my studio. They also asked me where I received my education. At other times, I was interrogated about my political activity in the March 15 movement to end division. Security officers even asked me if I was sexually active!"

Watch a medley of Antar's work through the years.

Rap first emerged in the occupied territories as a response to Israeli practices against Palestinians, then it started to expand to include domestic and youth causes. Most governments in Gaza and the West Bank have ignored rap and rappers. However, the Hamas-led government that took power in Gaza in 2006 after successful elections, has shown an interest in rap. The municipality of Gaza even organized an on-air contest with a Norwegian city, Tromsø, through video conference. The contest was titled "Our Message" for rap music. Although the Norwegian team was a professional group, a Gazan rap group — including Ghneim and Ayman Shahin — won.

This was in December 2009. It was the last show sponsored by the government. Afterwards, a policy of suppression was launched to impose Islamic ideology on the freedom of speech and expression in Gaza.

Sami Abu Watfa, the general director of civil work at the Ministry of Culture affiliated with the Gaza government, told Al-Monitor that "the decision to ban rap came as a result of indecent gestures made by some rappers in a concert at the time.

"However, there is no explicit prohibition of rap concerts," he added.

He then confirmed — while holding a permit for a play titled "Point of Order" — that in 2012, more than 100 permits were granted for festivals that were held in Gaza City. He stressed that the ministry is not responsible for any rap concert that has been banned by other authorities. He said the Ministry of Culture does not send paperwork requesting permits to the police of the Ministry of Interior.

The paper that Watfa showed to Al-Monitor was an approval permit for the play. The following sentence was added to the permit: “Provided that it complies with the applicable laws and regulations and with respect to customs and traditions.”

Asked about the meaning of this sentence, he explained that there is an effort to prevent any violations  that may affect public taste and local culture. He denied that it would constitute an ethical judgment, as much as it is an artistic judgment. He noted that usually, after granting the permit, the work is evaluated by  performing it — casually, not for security reasons — in the presence of a representative from the ministry of culture. He added that the permit is designed in the first place to protect the institutions from any dispute that may arise from different views, and stressed that when the Ministry of Culture approves the performance the Ministry of Interior does not interfere.

The rapper Ayman Mghames, who took to the stage in Gaza for the last time in 2009, said that the general image conveyed by the Ministry of Culture to the world is that there is a climate of freedom and cultural exchange, but the reality is different. A rap concert needs a permit from three departments: the ministries of culture and Interior, and the police. Whenever one of these permits is missing,  the relevant party will close down the show.

Palestinian Unity, Mghames’ band that began rapping in 2002, was prevented from taking part in more than six rap segments during concerts for civil institutions from 2011-2012, after the government of Gaza did not grant the band permits.

In order to find a straightforward answer to whether or not there is a ban on rap music, Al-Monitor met with the director general of the arts and creativity department, Atef Ascoul, at his office in the Ministry of Culture in Gaza. He said, “There is no absolute and final ban. Some things are banned based on a specific view, while other rap concerts are out of control. Restraints, customs and traditions in Palestinian society need to be maintained. Based on that, some officials want this art to be banned. For them, it represents intrusive Western culture. However, I personally see it as a national art and I find that many rappers in Gaza deserve attention for their talents."

Mghames finds that, at times, there is a lack of logic in the ban, recalling the French Cultural Center’s celebration of the music festival in Gaza in June 2012. At the festival, the French hip-hop artist Jesers performed and Ayman’s band — Palestinian Unity — was supposed to perform a rap segment. However, the government refused to let any local rap band take part in the festival, while it allowed foreigners to do so. He added, “We practiced hard, and when the time for the show with Jesers came, the director of the center told us that the government approved the rap concert, but not our participation, since we are artists from Gaza.”

Permits as a violation

Hamdi Shaqqura, the Democratic Development Director at the Palestinian Center for Human Rights, told Al-Monitor that permits for workshops and seminars represent a restriction on freedom of expression and cultural works, constituting a violation that falls within restrictions on cultural rights. He explained that they had strongly criticized the security forces’ campaign in the Gaza Strip, characterized by an ideological move to impose the Hamas lifestyle.

Antar prefers to perform in front of the mirror in his room rather than traveling to Europe — as some Palestinian bands have done, looking for freedom to rap. He wants change, and change and influence can’t be found in  European cities, which do not understand the Arabic language  and where he has to wait for the audience to hear the words “free Palestine” before they applaud.

Asmaa Al-Ghoul is a journalist and writer from the Rafah refugee camp based in Gaza.