Cairo has reportedly instructed local media outlets not to publish content criticizing the recent UAE-Israel normalization deal in another blow to press freedom in the country. 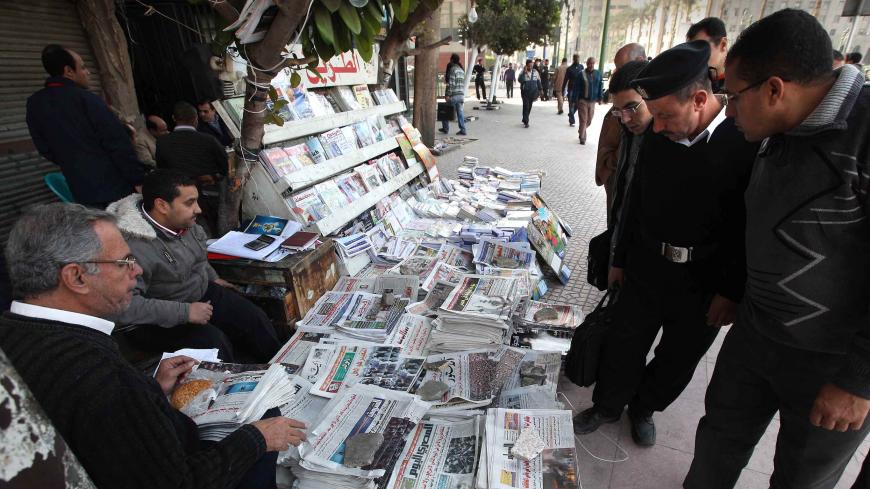 CAIRO — Egyptian media outlets were instructed not to publish any news or statements criticizing the agreement to normalize ties between Israel and the United Arab Emirates, an Egyptian security source told Al-Monitor on condition of anonymity.

On Aug. 13, US President Donald Trump announced an agreement for diplomatic normalization between the UAE and Israel, noting that delegations from the two countries would meet soon to sign other complementary agreements.

Cairo has come out in support of the UAE-Israel agreement and its provisions, which include suspending Israel’s plans to annex Palestinian territories. Egyptian President Abdel Fattah al-Sisi announced his support for the Israel-UAE agreement on Aug. 13, praising the efforts that led to this deal.

On Aug. 14, Israeli Prime Minister Benjamin Netanyahu thanked Sisi as well as Bahrain and the Sultanate of Oman for their support, noting in a tweet, “The agreement expands the circle of peace and benefits the entire region.”

Meanwhile, Palestinian President Mahmoud Abbas said on Aug. 18 that the UAE “has stabbed the Palestinian cause in the back with this normalization agreement with Israel.” On Aug. 20, Palestinian Prime Minister Mohammad Shtayyeh described the agreement as a “painful blow and a flagrant deviation from the Arab consensus.”

The Egyptian security source explained that though Egypt supports the right of the Palestinian people to their land and promotes the two-state solution based on the 1967 borders, the Israel-UAE agreement is in the interest of peace in the region and includes Israel's commitment to suspend its plans to annex Palestinian territories. He added that Egypt's support for the deal will not affect mediation efforts between Fatah and Hamas.

The source explained that Egypt was the first Arab country to normalize relations with Israel under the 1979 peace treaty, followed by Jordan in 1994, making the UAE the third Arab country to do so, not the first

He stressed that Cairo clearly stands in solidarity with Palestine but sees peace with Israel as realistic, considering the state's coordination with several Arab countries, notably Oman, the UAE, Iraq and Saudi Arabia, even though these countries do not recognize Israel.

The source pointed out that Egypt, Israel, Jordan and Palestine are all members of the EasMed Gas Forum, which Egypt established in January to achieve cooperation on gas exploration in the Mediterranean. Talk of resisting normalization or severing all relations with Israel is unrealistic and does not take into account the new political and economic dimensions in the region.

He stressed that Cairo realizes that Palestine will have reservations about the agreement, but with time, it will realize that this deal is in its interest. He does not believe that Egyptian-Palestinian relations will be affected.

Meanwhile, a source at the Egyptian newspaper Dostor told Al-Monitor on condition of anonymity that the staff has been instructed not to publish news criticizing the peace treaty between Israel and the UAE. The source said that the instructions were given by phone to the editors-in-chief and heads of satellite channels or through private Whatsapp groups, and most media outlets naturally will abide by them.

The majority of Egyptian media outlets are currently directly affiliated with the state or the security services or are loyal to them. The press source said that all Egypt's newspapers and news sites are subject to restrictions and risk being shut down or banned from publishing if they step out of line. The Egyptian government has blocked over 549 opposition-affiliated websites in Egypt.

Political commentator Abdel Khaleq Farouk, who is also the director of the Nile Center for Economic and Strategic Studies, told Al-Monitor over the phone that restricting the Egyptian press from criticizing the agreement or publishing the Palestinian position rejecting it is a betrayal of the Palestinian cause at the expense of pragmatic interests with Israel.

Farouk noted that preventing the news media from publishing specific statements or stances violates Article 65 of the Egyptian Constitution, which stipulates, “Freedom of thought and opinion is guaranteed. All individuals have the right to express their opinion through speech, writing, imagery or any other means of expression and publication.”

Ahmed al-Jaddami, a human rights lawyer at Al-Helaly Foundation for Rights and Freedoms, told Al-Monitor over the phone that the authorities’ instructions not to publish specific material falls in line with Egypt’s vision of nationalizing and controlling the press. He explained that Cairo believes normalization with Israel is a good thing and serves the peace process in the Middle East.

Jaddami noted that Cairo's support for the normalization agreement was predictable because Egypt preceded the UAE in this regard and cooperates and coordinates with Israel in several important security and economic matters, such as the Jan. 15 agreement to import natural gas from Israel’s Leviathan and Tamar fields to Egypt.