Despite Egypt being the first Arab country to sign a peace treaty with Israel in 1979, analysts in Egypt do not share President Abdel Fattah al-Sisi's enthusiasm about the recent Emirati-Israeli peace deal. Some have denounced it as "a betrayal" of the Palestinian cause while others reminisce about Arabs' "lost opportunities" for peace. 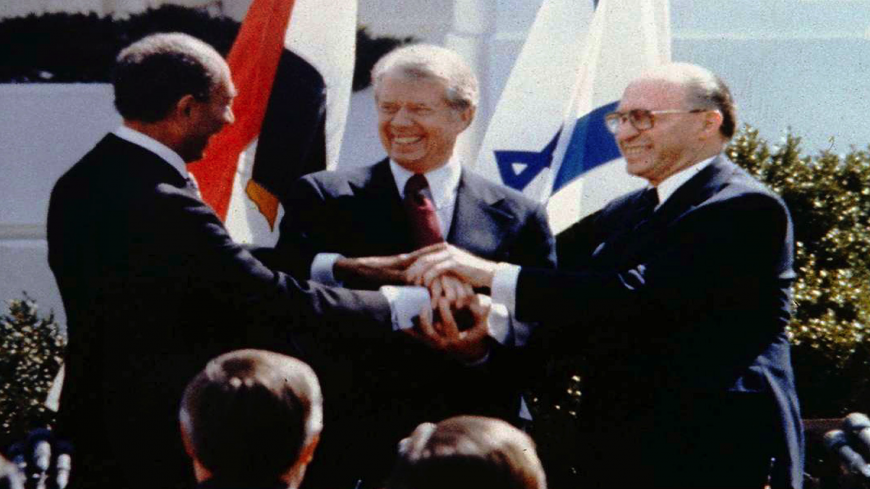 Cairo has welcomed the US-brokered peace agreement that would fully normalize relations between the United Arab Emirates (UAE) and Israel in exchange for a suspension of Israeli annexation of West Bank land. In an official statement released Aug. 13, President Abdel Fattah al-Sisi called the tripartite deal “historic,” affirming that it would “advance peace efforts and open new horizons for stability in the Middle East.”

Sisi also expressed his support for the peace deal via his official Twitter account, highlighting Israel's promise to cease its planned annexation of Palestinian territory, without mentioning that the move may only be temporary or that the agreement makes no reference to the return of Palestinian land previously annexed by Israel.

“I followed with great interest and appreciation the tripartite joint statement by the United States, the UAE and Israel regarding the agreement to suspend annexation of Palestinian territories and to take steps that would bring peace to the Middle East,” he tweeted.

“I also appreciate the efforts to achieve prosperity and stability to our region by the signatories to this agreement,” Sisi added.

The UAE is the third Arab country after Egypt and Jordan to sign a peace treaty with Israel, a move that some analysts believe may pave the way for similar deals. Based on analytical reports, Oman and Bahrain — which have also expressed their support for the tripartite agreement and, like the UAE, purportedly have had covert relations with Israel for some years now — are likely watching closely domestic and regional reactions to the agreement to decide whether and when they too can publicly announce normalization with Israel.

Besides conducting under the table dealings with Israel, the UAE and other neighboring Gulf states have in recent years “forged an alliance with Israel to counter Iran's expansionism,” Dov Waxman, director of UCLA's Y&S Nazarian Center for Israel Studies, told CBC. Waxman said normalization with Israel would only serve to “fortify the alliance.”

But Sisi's optimism and enthusiasm about the UAE-Israeli peace deal has failed to rub off on some of his countrymen. Critics of the treaty, such as Hassan Nafaa, a professor of political science at Cairo University, expressed their dismay, considering the agreement “a betrayal” of the Palestinian cause.

“The UAE's announcement that it is committed to forging full official relations with Israel in exchange for 'postponement' of Israel's planned annexation of occupied Palestinian territory constitutes a betrayal of the Palestinian cause and an underestimation of the Arab peoples,” Nafaa tweeted shortly after news of the agreement broke Aug. 13. “It also reaffirms that Arab governments are leading their countries into the abyss and surrendering to Israeli hegemony,” he added.

Mustapha Kamel el-Sayed, also a political science professor at Cairo University, agreed. He said the Donald Trump administration had previously dragged its feet in giving Israeli Prime Minister Benjamin Netanyahu approval for his plan to annex West Bank land; the UAE leadership had capitalized on the United States' wavering stance to announce the recognition of Israel, claiming that the latter had accepted the cessation or suspension of its plan to annex more West Bank territory in exchange for normalization of relations. “The Israeli leadership has pledged to halt or suspend its annexation plan, which does not mean it has completely abandoned the plan; rather, it has only postponed it for some time,” Sayed told Al-Monitor.

Other analysts, such as Hossam Badrawi, a politician and founder of the Union Party (made up of former members of Hosni Mubarak's now-defunct National Democratic Party), and reform leader Mohamed ElBaradei, meanwhile, lamented “the lost opportunity for peace” in the late 1970s when the Palestinians and other Arab states had turned their backs on Egypt over its unilateral efforts to make peace with Israel.

“When Egypt signed a peace treaty with Israel, it did so in exchange for the return of [parts of] Sinai [which were occupied by Israel at the time]; it would have been possible then to also regain most of the occupied Arab land if the Palestinians had agreed to take part in the [peace] negotiations,” Badrawi tweeted. He also blamed the Arab Spring protests for failure to defeat Israel militarily and culturally.

“Unlike Israel, we failed to understand when we began peace negotiations with Israel in the [late] 1970s that a unilateral peace is not [a real] peace but would only create an imbalance of power in the region in favor of one party over another and would, in the long term, lead to lost opportunities for a just and lasting peace. Everyone is paying the price,” ElBaradei wrote in a comment published on his Twitter account.

It has been more than four decades since Sadat shook hands with then-Israeli Prime Minister Menachem Begin at the White House on March 26, 1979, in a famous photo-op that followed the signing of the then-highly controversial Egyptian-Israeli peace treaty, the first such treaty normalizing Israeli relations with an Arab country.

The Camp David Peace Accord, as the treaty was called, brokered by then-US President Jimmy Carter, cost Sadat his life; he was shot and killed by a member of Islamic Jihad while watching a military parade on Oct. 6, 1981. Moreover, the accord did not spell the end of the official policy of enmity between Egypt and Israel — two countries that have fought no fewer than five wars since the start of the Arab-Israeli conflict in 1948.

For the greater part of the last 40 years and under successive Egyptian regimes, only a cold peace prevailed and relations between Egyptians and Israelis were, to say the least, strained. There was little people-to-people contact save for the few Israeli tourists that visited Sinai and who were often compelled to hide their identities for fear of being targeted by Islamists. They were right to do so. On Oct. 10, 2004, 32 people — 12 of them Israelis — were killed in terror attacks on two south Sinai holiday resorts, the Taba Hilton and the Ras al-Shitan campsite, frequented by Israelis.

But relations between Cairo and Tel Aviv started warming up after Sisi came to power in 2014. Since then, security cooperation between Egypt and Israel has grown: Israel reportedly conducted more than 100 airstrikes in Sinai between July 2015 and March 2018 in support of the Egyptian government's efforts to counter an insurgency in the peninsula, according to Carnegie Endowment for International Peace.

Moreover, Israel has given the green light for the Egyptian military to deploy forces in Sinai's demilitarized buffer zone upon the latter's request. Under the Camp David Peace Accords, Israel's approval for such a move is necessary. Egypt has also continued to play a mediating role between rival Palestinian factions in an effort “to pave the way for a lasting peace with the Israelis,” in addition to its role in helping to de-escalate tensions between Hamas and Israel on several occasions.

This, despite Egypt's own faltering relations with Hamas, which Egypt has accused of conspiring with the banned Muslim Brotherhood. Egypt's economic ties with Israel have also improved with the signing in February 2018 of a new natural gas deal worth $15 billion that allows Egypt to import natural gas from Israel over a 10-year period. Analysts have described Egyptian-Israeli relations as being at their “highest level” in history under Sisi.

But it may take years to undo the decades of animosity that many Egyptians still harbor for Israel. For decades, they had been conditioned to believe that Israel is their No. 1 enemy — the anti-Israeli rhetoric has long been hammered into their psyche via school textbooks, mainstream media and soap operas that persistently demonize Israel. Just as recently as March, a sci-fi drama series called “The End,” shown on Egyptian television during Ramadan, a peak viewing period in Egypt and the rest of the Arab World, depicted the destruction of Israel, provoking an outcry from Egypt's new ally.

But Amr Moussa, a former Arab League secretary-general who had strongly advocated the two-state solution, believes change is coming. In a comment published on his official Facebook page on Aug. 14, he called for the cessation of Israel's annexation of Palestinian land to be clearly stipulated as a condition for the normalization of relations between the UAE and Israel. He also called for an Arab League meeting “to seriously discuss the recent developments.”

“It (halting the annexation) has now become — according to UAE statements — part of Israel's obligation toward the UAE. If the UAE recognizes Israel, we should expect the suspension of annexation to be stipulated in the official agreement. If Israel refuses to put this in writing or if it refers to it as a US and not an Israeli assurance or if Israel rescinds on its decision, this should be considered a violation of the agreement and would, in turn, allow the UAE to pull out of the deal,” Moussa wrote.