Will Egyptians ever accept normalization with Israel?

Even the hint of normalization efforts between Israel and Egypt creates a public outcry in Cairo. 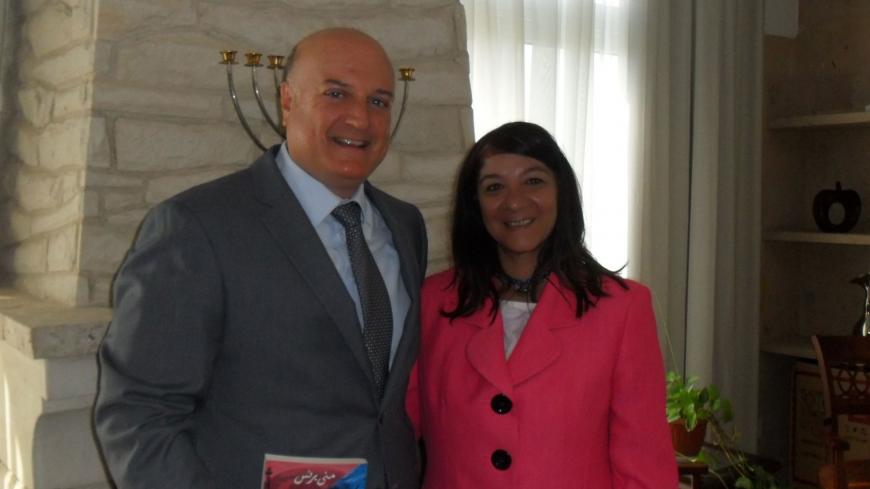 CAIRO — Officially, Israel and Egypt appear to have forged civil relations in some regards. The Egyptian public, however, holds a different, much dimmer view of the relationship.

High-ranking officials from both countries meet regularly: Egyptian President Abdel Fattah al-Sisi and Israeli Prime Minister Benjamin Netanyahu met in September, and Sisi is set to meet with Israel's energy minister this month in Cairo. Yet attacks and controversy seem to follow each visit by an Egyptian figure to Israel or to the Israeli ambassador in Cairo.

The Egyptian public's backlash in such matters can be considerable. Just ask Mona Prince, the fired English literature professor at Suez Canal University who unsuccessfully ran for president in the March election. Granted, she was already controversial, but her Dec. 3 meeting with Israeli Ambassador David Govrin at the Israeli Embassy in Egypt sparked a wave of attacks and insults from public and media figures who described her as a “traitor.”

Still, Prince appeared Dec. 12 on Israel's Makan 33 public TV channel to comment on the meeting. She said, “Nothing in Egyptian law criminalizes communicating with Israelis. Besides, I don't represent any party and my behavior is legal.”

Prince said she and Govrin met in a step toward public and cultural normalization between Egypt and Israel, while promoting humanitarian behavior between the two peoples and rejecting divisive political disputes. “There is no cultural, academic or athletic normalization with Israel, and I hope the situation will change someday,” she said.

“I don't care about the people [verbally] attacking me. … I hope people can reach humanitarian solutions based on cooperation and a better life in the region," she added.

Al-Monitor tried to contact Prince, who refused to make any more statements to the media because of threats against her. Meanwhile, the president and other state officials refused to comment on the news in the media.

Following the Makan 33 interview, the hostility toward Prince progressed from media circles to the judiciary. Several complaints were filed against her. On Dec. 4, lawyer Ayman Mahfouz filed a complaint condemning her for meeting with the Israeli ambassador.

In his complaint, Mahfouz wrote, “She insists on denying the values of the Islamic nation, from its struggle against the oppressive Zionist entity to its militancy to protect Christian and Islamic sanctities from the abuses of Israel, which has denied the name 'Palestine' and called it 'Israel.'"

On the same day, lawyer Samir Sabri filed a complaint describing Prince's meeting with the Israeli ambassador as “a crime and collaboration with the enemy of the Arab world and Egypt."

"Even if there is a ratified agreement, Prince does not have the capacity to collaborate with a foreign party without authorization, and she can thus face criminal prosecution," Sabri wrote in his filing.

However, despite the allegations, these complaints have no legal grounds and so will not actually be referred to the judiciary. They are just a form of public and media pressure, as Egyptian law does not criminalize Egyptian-Israeli dealings.

Adding to the commotion, the Egyptian Writers Union expelled Prince because of her meeting with Govrin. Mukhtar Issa, the union's deputy director, told Youm7 newspaper Dec. 4, “She violated the norms and laws of the union that have repeated the importance of boycotting the Zionist entity and refusing normalization completely.”

Prince is not the first person to face a backlash from meeting with an Israeli official. Saad El Din Ibrahim, director of the Ibn Khaldoun Center for Development Studies, also was labeled a traitor when he visited Israel in January 2018 and then in July met with Govrin in Cairo.

Ibrahim told Al-Monitor, “Nasserist writers and journalists are the ones attacking and terrorizing public normalization with Israel. However, not all Egyptians agree.” By Nasserists, Ibrahim was referring to those supporting the policies of the late President Gamal Abdel Nasser, who led the war against Israel in 1967 and rejected peace with the Israelis.

When visiting Israel, "I faced similar pressure, media attacks and accusations of betrayal. But I didn't care, because I believe the attackers are remnants of the Nasserist regime, which believe in an ongoing war with Israel," he said. “Some Egyptians don't mind dealing with Israel, but they are afraid of psychological pressure. Collaboration with Israel is not a crime, as Egypt does not have a law against it.”

Ibrahim said he is expecting a group of Israeli academics and intellectuals to visit Egypt on Jan. 23. “The aim is to exchange ideas and opinions, because we believe in the importance of peace,” he added.

In 1979, Egypt signed a peace treaty with Israel in Washington, after the Camp David Accords signed in 1978 by the two countries' leaders. Among the key provisions of the treaty is each country’s recognition of the other, the complete halt of their long-running war and the retreat of Israeli forces from the Sinai Peninsula. The provisions were implemented, but normalization still hasn't reached non-political fields in the public's eyes. There are no cultural conferences between the two countries, and Egyptians reject the organization of any Israeli artistic or intellectual events on their territory.

Tarek Fahmy, a political science professor at the University of Cairo, told Al-Monitor there is a clear difference between official Israeli-Egyptian relations and how the public perceives them. "Officially, ties are stable and secure between them. But Israeli ambassadors to Egypt have always suffered from social isolation because they don't participate in media and cultural activities. Egyptian society rejects such participation," he said.