The image of an Italian baroque statue posted to social media has rekindled the debate in Egypt on whether Islam allows naked figures. 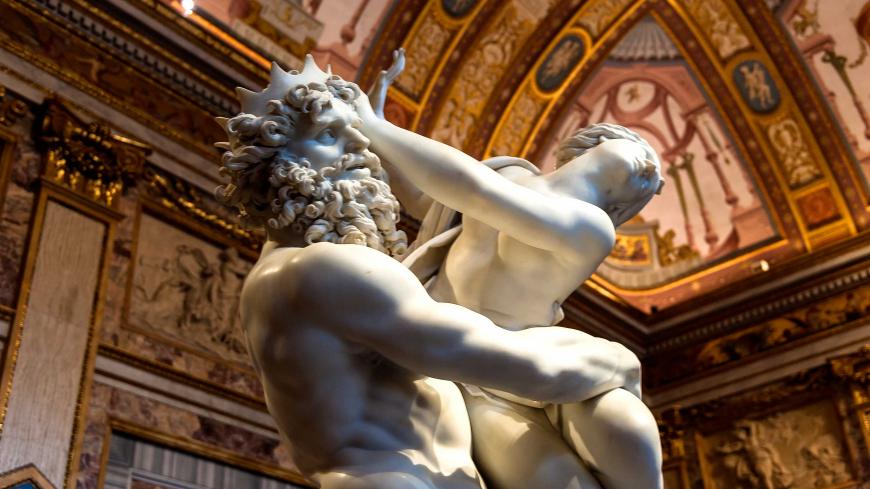 CAIRO — Earlier this month, a 17th-century baroque statue depicting the rape of Persephone by Hades, the Greek god of the underworld, created an ongoing major controversy among Egyptian intellectuals and sheikhs over whether naked statues are reconcilable with Islamic teachings.

It began when doctor and journalist Khaled Montaser shared photos of “The Rape of Proserpina,” by the Italian artist Gian Lorenzo Bernini, on his personal Facebook page Nov. 2. The marble sculpture features two naked figures, Hades and Proserpina, better known as Persephone in Greek mythology. Persephone is in distress, with tears running down her cheeks, as she struggles to free herself from Hades' clutches. Alongside the photos, Montaser wrote in Arabic, "Any issue can be expressed by art – [Here] even the unpleasant issue of rape was converted into an exquisite sculpture."

On the day Montaser posted the image, Khaled El Gundy, a preacher at Al-Azhar, accused him of publishing sexually obscene material under the pretext of it being art. Gundy made his accusation on “May They Understand,” a television show on religion that he hosts on the DMC satellite channel.

The next day, Gundy called in to “Another Word,” a show on Dream TV hosted by Rasha Nabil, and said that Montaser had committed a dishonorable act and that the Persephone image was disgraceful and offensive to the public. He called on prosecutors and lawyers to take action against Montaser.

Montaser, whose views were also solicited for “Another Word,” said that many Egyptian intellectuals, including Farag Foda, a secularist critical thinker, had been killed in 1992 because of fatwas issued by what he called the “likes of Gundy.” He added, “Unfortunately, the state relies on such people to invigorate the religious discourse. I also call on the DMC channel to put a stop to [Gundy].”

The bitterness between the two men then moved to the judicial arena, where on Nov. 4, Samir Sabri, a lawyer, filed a complaint with the attorney general demanding that Montaser be tried by the competent court on charges of incitement to immorality. Sabri cited Article 178 of the Penal Code, which stipulates imprisonment for two years and/or a fine from 5,000 to 10,000 Egyptian pounds ($282 to $565) for manufacturing or possessing printed materials, manuscripts, advertisements, reliefs, engravings, manual or photographic drawings, signs or any other material or photographs violating public morals. It is not unusual for decisions on whether to prosecute to take months.

The debate and the judicial threat have extended into a full-fledged campaign by Montaser and his supporters against Al-Azhar and Salafi movement sheikhs. Montaser told the London-based Al-Arab newspaper Nov. 17 that Al-Azhar has stopped being rational when it comes to religious affairs and is dredging up fatwas of anachronistic sheikhs and imams, whom many intellectuals argue are unsuitable for these times. Montaser noted that many of Al-Azhar’s sheikhs are hard-liners who follow an ultraconservative approach that is no different from Salafism, despite the differences between Al-Azhar and Salafi institutions.

Two days later, Montaser posted on his Facebook page a video of Mahmoud Abdel Razek al-Radwani, a dissident preacher of the Salafi Call, attacking and criticizing Salafi sheikhs such as Mohamed Hassan, Mohammed Hussein Yacoub and Abu Ishaq al-Hawaini. Radwani accused them of charging thousands of dollars for appearing on religious shows, although they had repeatedly sworn that they would never charge money for media appearances. He also charged that financial gain was the purpose of most religious channels, pursued at the expense of the consistency of their fatwas with the actual teachings of Islam.

Many public figures — among them member of parliament Imad Gad, Alexandria University philosophy professor Ashraf Mansourat and filmmaker Jamal al-Adl — have stood by Montaser. The hashtags #TogetherAgainstTheAdvocatesOfDarkness and #InSolidarityWithKhaledMontaser have both been trending.

Although various parties in Egypt have taken sides between Gundy and Montaser, the sheikhs of Al-Azhar and Dar al-Ifta, a government-supported educational and research institute for Islam, have refrained from comment on the clash. On Nov. 6, however, they issued a joint list of 50 sheikhs and professors from Al-Azhar and Dar al-Ifta authorized to publicly issue fatwas. Gundy did not make the list.

Al-Monitor contacted Abbas Shuman, deputy of Al-Azhar, who said, “Gundy's exclusion from this list has nothing to do with his issue with Montaser. As for fatwas regarding posting pictures of nude statues, Al-Azhar is committed to the fatwas issued by Dar al-Ifta in this regard.”

On Nov. 6, Dar al-Ifta issued a fatwa on its website stating that the sculpting or painting of nude bodies was forbidden. The fatwa read, “The painter has the right to draw flowers, trees and other things that God has permitted to worshippers, which are far more beautiful than a nude body.”

Sheikh Mustafa Rashed, an Al-Azhar graduate and president of the Union of Islamic Scholars for Peace, disagrees with the fatwa and with Gundy. He claims that the sculpting or drawing nude bodies does not violate Sharia. The Egyptian press quoted Rashed as saying, “There is no Quranic text or Sunnah prohibiting this act. It is not natural for a man to be aroused by simply looking at a nude statue or a painting.” The Sunnah is largely based on the sayings or teachings of the Prophet Muhammad.

Rashed’s fatwa is the only one in line with the view of Egyptian sculptors. Prominent sculptor Tarek al-Koumi told Al-Monitor, “Gundy's role is limited to spreading the teachings of the Islamic religion and should not extend to the assessment of art and beauty and the impact of sculptures and paintings on humans.”

Koumi further stated, “It is unacceptable to say that looking at a nude statue or painting is a source of sexual arousal, because the person who is aroused by a statue is sick, an exception. A fatwa that forbids sharing pictures of a nude statue is backward-minded and primitive.”

Meanwhile, Salah al-Meligy, an Egyptian artist, told Al-Monitor, “Nude statues are widespread in Europe. However, rape rates in Europe are much lower than in Egypt, because there is no connection between a nude statue and incitement to immorality. Such statues are a form of art, and only people with mental illnesses are aroused by them. Gundy and Dar al-Ifta are butchering this form of art in Egypt with their fatwas.”