Regardless of the estrangement over the past years, more rapprochement between Egypt and Morocco is expected during the next stage, after the kingdom joined other Arab countries in normalizing relations with Israel. 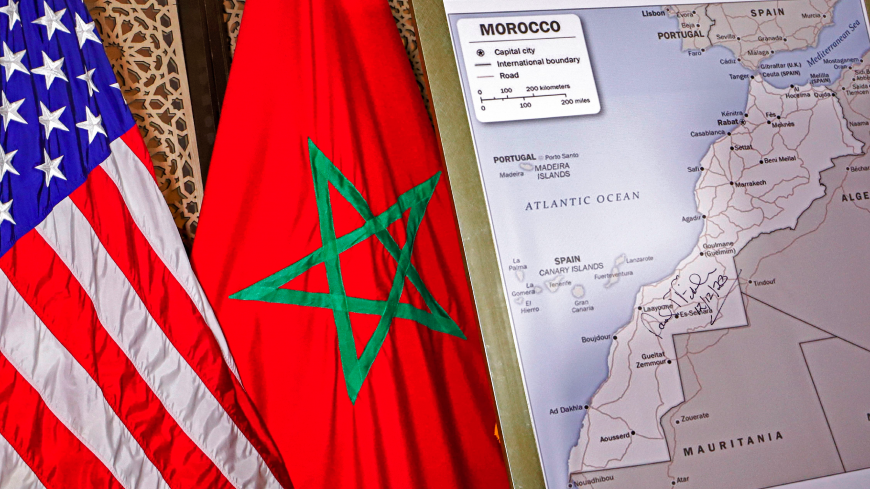 This picture taken on Dec. 12, 2020, shows (L to R) US and Moroccan flags next to a US State Department-authorized map of Morocco recognizing the internationally disputed territory of Western Sahara (bearing a signature by US Ambassador to Morocco David T. Fischer) as a part of the North African kingdom, in Morocco's capital, Rabat. - AFP via Getty Images

CAIRO — Morocco has recently joined the United Arab Emirates, Bahrain and Sudan in normalizing relations with Israel. The agreement to normalize relations between Israel and Morocco, which the White House announced on Dec. 10, sparked the interest of Arab countries in the Middle East, namely Egypt.

President Abdel Fattah al-Sisi was one of the first Arab leaders to support the agreement. Officially commenting on the deal, Sisi tweeted on Dec. 10, “I followed up on the important development represented in the US-sponsored Morocco-Israel normalization agreement with great interest. I value this step since it achieves regional stability and cooperation.”

The Egyptian presidential interest in the agreement between Morocco and Israel came in contrast to the lukewarm Egyptian-Moroccan relations in recent years, which was evident in the lack of bilateral meetings at the diplomatic and official levels, in addition to the repeated postponement of a meeting between Sisi and the Moroccan monarch, King Mohammed VI.

In this context, Egypt's Ambassador to Morocco Ashraf Ibrahim told Al-Monitor, “There may be ups and downs [in Egyptian-Moroccan relations], but there have not been any real crises since the 1970s,” adding, “There is diplomatic coordination [between the two countries] in the regional files, especially the Libyan issue, which is considered a matter of national security for Egypt, in addition to the issue of terrorism and illegal immigration.”

Speaking about the lack of diplomatic momentum between the two countries in the past years, Ibrahim said, “The last meeting of the [Egyptian-Moroccan] Supreme Committee between the two countries was in 2006, but it will reconvene [soon] with the first summit meeting." He added, “King Mohammed VI was supposed to visit Egypt in March, but he postponed his trip with the outbreak of COVID-19.”

As part of the normalization deal between Morocco and Israel, Washington recognized Morocco’s sovereignty over Western Sahara — a critical issue between Morocco and the Arab countries given the lack of Arab support for the kingdom in the 45-year conflict over the disputed territory with the separatist Polisario Front.

“The Western Sahara issue was not a cause for any political bickering or estrangement in relations between Egypt and Morocco,” Ibrahim noted. “Egypt did not have any relations with the Polisario Front and never recognized it. Cairo has a clear position in resolving this conflict within the framework of the United Nations and perceives the Moroccan proposal for autonomy as a good basis for reaching a durable and just solution.”

Yet Sisi's comment on the Israeli-Moroccan agreement did not mention the US recognition of Morocco's sovereignty over Western Sahara, while no official party in Egypt issued any comments on this issue, although it is the first time that a Western country recognizes Morocco's sovereignty over this disputed territory. Meanwhile, other countries such as the United Arab Emirates welcomed the US stance, as stated in a tweet by Abu Dhabi’s Crown Prince Sheikh Mohammed Bin Zayed.

Western Sahara is the only area in Africa whose fate has not yet been decided post-Spanish colonialism. Clashes between Morocco and the Polisario Front resumed in November after Morocco launched a military operation in the Guerguerat buffer zone to reopen the crossing between Western Sahara and Mauritania on Nov. 13, while the Algeria-backed Polisario Front announced on the same day Nov. 13 that the cease-fire approved by the UN 30 years ago has ended.

Morocco’s Ambassador to Cairo Ahmed Tazi told Al-Monitor, “The most important issue for Morocco is the US recognition of its sovereignty over Western Sahara, as it is a historic achievement.”

He added, “Cairo's position on the peace agreement with Israel stems from its vision for building peace in the Middle East, which is consistent with Morocco’s position on the Palestinian cause, [which includes support] for the two-state solution and calling for direct negotiations between the Palestinians and the Israelis in order to reach a lasting peace.”

Tazi pointed out, “The diplomatic relations between Egypt and Morocco are stable, and there is continuous coordination and consultation in international and regional organizations on issues and crises in the Arab region, given that the two countries are the focus of stability in North Africa and the Arab world.”

Despite signs of official interest in the peace agreement between Morocco and Israel, the agreement did not receive broad attention from the Egyptian media and studies centers such as the ones between Israel and the UAE, Sudan and Bahrain. Some observers attribute this to the lack of momentum in official, popular, academic and cultural relations with the Arab Maghreb.

Saeed Okasha, an expert at Al-Ahram Center for Political and Strategic Studies, told Al-Monitor that the lack of momentum in relations with Morocco is due to many reasons, mainly the geographical distance, the lack of direct political interests and the difference in dialects, adding, “The low-level relationship between Egypt and Morocco is due to the different positions of both the political leaderships, starting with the Islamists, which Egypt sees as terrorist groups, and the Libyan issue, which created a divergence of views between Egypt and Morocco, while Cairo has taken a neutral position regarding the Western Sahara issue.”

Speaking about how the Moroccan-Israeli peace agreement could reflect on the rapprochement between Egypt and Morocco, Okasha said, “The great impetus to rearrange the region within the framework of normalizing relations with Israel and the momentum created by the peace process with the Arab world may create common grounds for political relations between Egypt and Morocco.”

However, he explained the lack of interest of the political and media elites in Egypt in the peace agreement, saying, “Although Egypt has presented itself as a model for a peacemaking state since the era of [late Egyptian President Anwar] Sadat, the various political elites, including those who support state policies and the president, do not support normalization [with Israel] and find it embarrassing to comment on it.”

Bahaa al-Din Ayyad, a researcher in international relations and national security affairs, told Al-Monitor that Egypt is not present enough in some Maghreb issues because the conflict over Western Sahara was at a stalemate and did not require the interference of Egypt or any other country. Meanwhile, the Egyptian position remained firm in support of a peaceful solution, keeping a balanced relationship between Algeria and Morocco by communicating with both sides immediately after the escalation in the Guerguerat region, calling for restraint.

He noted that the Egyptian position is in line with that of the African Union but differs from that of the Gulf, which quickly announced its support for the Moroccan measures in Western Sahara. “The Egyptian action regarding Morocco may be faltering at some point due to the polarization between Morocco and Algeria,” he said.

Speaking about the Egyptian position on the Moroccan-Israeli peace agreement, Ayyad said, “The current peace-for-peace formula, let alone the two-state solution and the Arab peace initiative that Cairo has always been calling for, remains a cause of concern for the Egyptian administration, despite the official positions that welcome peace agreements, considering that Egypt is the first Arab country to conclude a peace agreement with Israel and to establish full diplomatic relations.”

Regardless of the estrangement over the past years, more momentum, rapprochement and coordination between Egypt and Morocco are expected during the next stage, after Morocco joined other Arab countries in normalizing relations with Israel.