According to a new law approved by Egyptian President Abdel Fattah al-Sisi, a military adviser will be tasked with representing the Ministry of Defense in every governorate, as is the case with all other ministries. 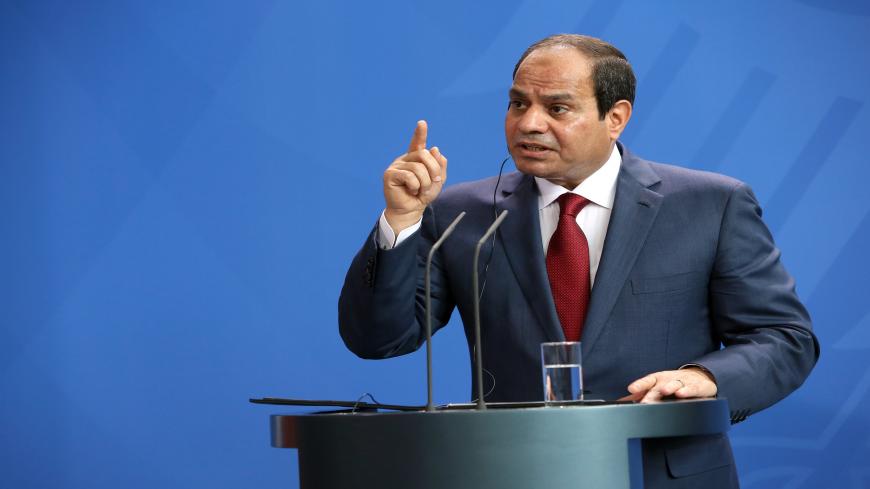 CAIRO — Egyptian President Abdel Fattah al-Sisi issued July 29 Law No. 165 of 2020, amending some provisions of the Law on Popular Defense Organizations No. 55 of 1968. Controversy arose in political and human rights circles due to the introduction of new articles, including one stipulating the appointment of a military adviser for each governorate as well as a number of assistants, appointed by the minister of defense.

The new law gives multiple powers to the military adviser, most notably attending the meetings of the People's Defense Council and the Executive Council for implementing the governorate’s plans, holding meetings with the governorate’s leaders, reporting to the Ministry of Defense and the relevant authorities, and delegating any of his duties to his assistants.

The Executive Council is established in all governorates and headed by the governor. Its members include parliamentarians and mayors, and its task revolves around monitoring the development projects of the governorates.

According to the law, the new military adviser’s duties include monitoring services in the governorate, overseeing projects, as well as constantly communicating with citizens in order to maintain national security, not to mention coordinating with educational authorities at the governorate level to implement the curriculum of military education in accordance with the rules determined by the Ministry of Defense.

The military education curriculum consists of a military educational program that takes place in all governorates in cooperation with the armed forces and all Egyptian universities within the framework of educating young people about their national role and the effort made by members of the armed forces to defend the country. All male students have to attend this compulsory program during their studies, before the actual military conscription.

During the July 6 plenary session, the Egyptian parliament approved the draft law submitted by the government to amend some provisions of Law No. 55 of 1968 regarding popular defense organizations.

In this context, Ahmed al-Jaddami, a human rights lawyer at Al-Helaly Foundation for Rights and Freedoms, told Al-Monitor that legislation has been used for the military institution in Egypt to implement full control over the state while civilians are largely marginalized, even in their regular competencies in managing the governorates and their suburbs.

Jaddami noted that the current parliament and government are working to adopt and issue laws that devote more control in favor of the military at the expense of civilians. The recent law, he noted — which allowed for the appointment of a military adviser in every governorate throughout the entire republic — would make the military adviser a military ruler in reality, in addition to the fact that the majority of the governors are primarily former military personnel, either from the police or the army.

He pointed out that the law carries an economic dimension as well, as this military adviser will facilitate the assignment of projects to army companies and their subsidiaries, which is what already happens in reality. But the new powers will represent more dominance and control in all projects in the governorates such as wastewater treatment projects, desalination, street paving, lighting and other service projects that are assigned to the army’s Engineering Authority or to companies affiliated with the army, but not to other private companies, he added.

Jaddami stressed that the new powers will allow the military adviser to follow up on all the services in various sectors such as roads, bridges, transportation, health and education, which are in fact specialized, civil activities, while military officers specializing in the fields of defense and war have no experience or knowledge of them.

Ammar Ali Hassan, professor of political science at Helwan University, told Al-Monitor over the phone that the recent law has raised a great controversy in Egyptian society and the human rights and political circles due to legitimate concerns about the idea of militarizing civil life.

He noted that the new law gave great powers to the military adviser, who is appointed by the Ministry of Defense, which leads to a broader intervention by these officers protected by the force of law in the work of civil servants, thus marginalizing the job of civil servants and officials in all governorates and their suburbs.

Hassan explained that how the law is actually applied in reality will reveal the intentions and goals for which this law was issued in the first place, which can only be judged after the law comes into effect in the coming months.

Maj. Gen. Ashraf Gamal, undersecretary of the parliament’s Defense and National Security Committee, told Al-Monitor that the new articles that allow the appointment of a military adviser in each of the 27 governorates of Egypt aim to follow up on development projects and supervise national projects to ensure speedy implementation and the absence of favoritism or corruption.

He said that the new military adviser will have the primary task of representing the Ministry of Defense in each governorate, as is happening in all ministries of the state through the People’s Defense Council. Each ministry, he explained, has a military adviser whose mission is to assist the minister in certain tasks, especially those that need technical and engineering expertise, available within the Egyptian army.

Gamal pointed out that the new articles are in line with the amendments made to Article 200 of the Egyptian Constitution in April 2019, as the constitutional amendments to this article emphasized the role of the armed forces in preserving the basic foundations of the state, civil life, the people's benefits, and the rights and freedoms of individuals.

He explained that preserving the basic foundations of the state and civil life according to the amended constitutional text means that the armed forces play an important role in supporting all the agencies, governorates and ministries of the state in implementing national and development projects. This, he noted, required the enactment of legislation allowing the participation of a representative of the Ministry of Defense to follow up on projects and services provided to citizens in all governorates.

Gamal concluded that the military adviser’s tasks also focus on evaluating the performance of workers in these agencies to achieve high-quality services and serve the Egyptian people’s interests.