Egypt’s parliament approved a new draft law to allow the nondisciplinary dismissal, or dismissal without judicial procedures, of public servants who are affiliated with the Muslim Brotherhood. 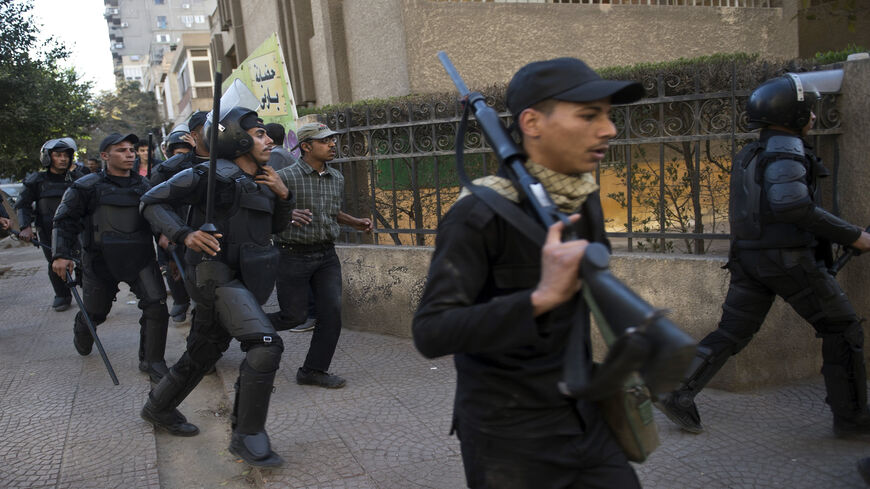 CAIRO — University presidents in Egypt intend to prepare lists of employees who ostensibly belong to the Muslim Brotherhood and other designated terrorist groups to be sacked from their jobs as per legislative amendments recently enacted by the Egyptian parliament allowing the dismissal of civil servants without taking disciplinary measures.

This comes after the Supreme Council of Universities meeting July 26 when it decided to task university presidents to draft these lists in a bid to exclude employees belonging to the Muslim Brotherhood, who are reportedly preventing universities from carrying out their educational mission.

On July 12, the Egyptian parliament approved a draft law to amend some provisions of Law No. 10 of 1972 regarding administrative dismissal without disciplinary action.

The new law allows the dismissal of any public employee in the state or any administrative body if they are found to undermine the state security or safety, or if their names were included on the lists of terrorists in accordance with Law No. 8 of 2015 on lists of terrorist entities and terrorists.

On Feb. 25, 2014, the court issued another decision to list the Brotherhood as a terrorist organization in Egypt.

According to the new amendments, the dismissal of an employee would be carried out by a decision from the president or the prime minister.

On June 28, the Social Democratic Party, represented by member of parliament Maha Abdel Nasser, rejected the amendments of Law No. 10 of 1973 regarding nondisciplinary dismissals, stressing that the law would turn into an oppression tool against any pro-opposition persons and subordinates. Abdel Nasser told Masrawy website that using security reports against employees is a worrying thing, wondering if there would be any guarantee to protect subordinates against their superiors.

A former member of the Muslim Brotherhood who works at an Egyptian university told Al-Monitor, “This new law is unjust and does not take into account the workers’ rights, regardless of their beliefs.”

He said, “It also opens the door before the unfair dismissal of thousands of employees based on rumors or unverified accounts of some colleagues."

The source, who refused to give his full name for fear of reprisal, said he was a member of the Muslim Brotherhood a long time ago, but he no longer is, especially since it was designated as a terrorist group back in 2014.

In the past, the government issued similar decisions to dismiss public servants due to their affiliations with the Brotherhood.

On Oct. 31, 2019, the Ministry of Religious Endowments issued a decision to sack nine imams, based on court decisions accusing them of belonging to the banned Muslim Brotherhood.

These decisions raised the ire of the human rights community in Egypt, especially after much talk about the employers preparing lists of the names of their staff belonging to the Brotherhood to lay them off.

Ahmad al-Gadami, a lawyer and legal researcher, told Al-Monitor that any decision to dismiss university employees or public servants is irrational and in direct conflict with the most basic right of citizens, which is the right to work.

Gamadi, who works for Al-Helaly Foundation for Rights and Freedoms, said that the new amendments “are not exactly constitutional. Article 97 of the constitution stipulates that litigation is a guaranteed right for all and any person shall be tried before a judge. Despite all this, the new law allows the dismissal of employees as per a presidential decision without resorting to the judiciary.”

He noted that all legal systems around the world provide guarantees against arbitrary dismissal and the right to resort to court if necessary.

Gamadi pointed out that the state cannot “employ terrorists.”

“If some public servants were terrorists, how have they been working for long years in the state institutions? Is the mere ideological affiliation to the Muslim Brotherhood considered a violent act or terrorism and requires dismissal from service?” he quipped.

Gamadi added that the new amendments are politically motivated to remove a certain category of government employees, i.e., those who are affiliated with the Brotherhood.

Meanwhile, a judicial source who requested anonymity told Al-Monitor via phone that the Supreme Council of Universities’ decision to dismiss employees belonging to terrorist groups does not contradict the constitution.

He said that Article 14 of the constitution clearly stipulates that “nondisciplinary dismissal is valid only ‘in those situations set out by law,’ which allows the enactment of law for the dismissal of employees by an administrative decision in the event they commit a grave mistake, or they are affiliated with a terrorist group.”