Some legal experts are questioning the Egyptian Ministry of Religious Endowments’ decision to dismiss a number of imams across Egypt over their ties to the Muslim Brotherhood. 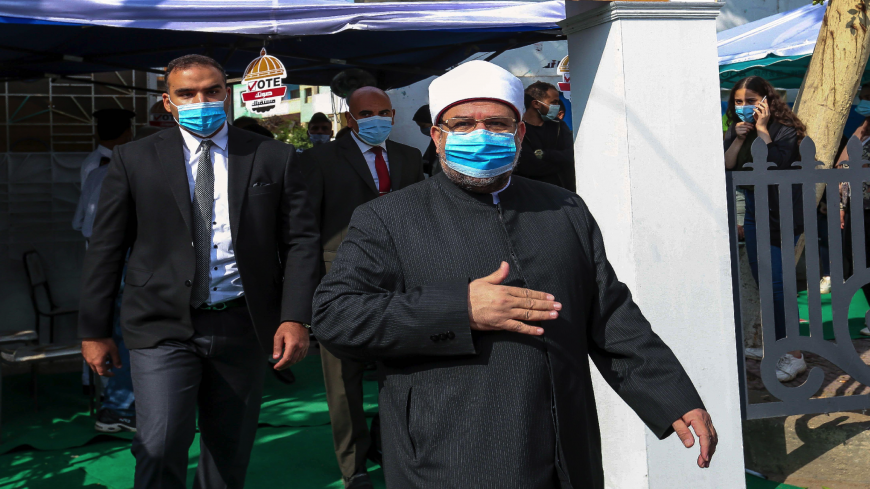 Egyptian Minister of Religious Endowments (Awqaf) Mohamed Mokhtar Gomaa leaves a polling station after voting during the second phase of a parliamentary election, in the capital Cairo on November 7, 2020. - KHALED KAMEL/AFP via Getty Images

A correspondent in Egypt
December 7, 2020

CAIRO — Egypt’s Minister of Religious Endowments Mohamed Mokhtar Gomaa issued Dec. 1 a decision terminating the service of an imam and preacher in Port Said governorate based on a judicial ruling.

In a statement issued on the same day, the Ministry of Religious Endowments said that based on the ruling issued against Abd al-Rahman Ahmed Qandil, the imam and preacher of the Port Said Endowments, the dismissal decision included a warning to all mosques of the republic not to allow him to mount the pulpit, give lessons or lead any prayers in mosques.

A source at the ministry told Al-Monitor on condition of anonymity that the ruling issued against Qandil proves his affiliation with the Muslim Brotherhood group. The ruling, he said, was transferred to the Human Resources Department at the ministry, which upheld the imam’s illegibility to continue practicing his job. Gomaa subsequently issued a decision to officially dismiss him, he added.

The source said this decision is not the first of its kind, as Gomaa had launched a major campaign several years ago to cleanse the ministry of the remnants of the Muslim Brotherhood and of those who follow its ideology and methodology.

He pointed out that based on judicial rulings, the Ministry of Religious Endowments dismissed Nov. 4 four imams and revoked the license of another. They include Ahmed Muhammad Jumah Salem, Muhammad Abdullah Hussein al-Jabali, Omar Hamid Tamam, Muhammad Muhammad Abd al-Sami and Abd al-Wahhab Mustafa Mustafa Khoder.

The ministry also warned in an official statement Nov. 4 that it would take decisive measures against all those who join any banned groups, adopt extremist ideology, or carry out acts of sabotage or instigation, albeit via social media.

On July 21, the Ministry of Religious Endowments announced the dismissal of two imams from the Sharqiya Endowments based on judicial rulings issued against them. It stressed that there is no room in the ministry for extremist ideology or for individuals who belong to terrorist groups.

The ministry had also announced Nov. 21, 2019, the dismissal of imams and preachers from mosques “after it was proven that they belong to the Muslim Brotherhood.”

The Ministry of Religious Endowments had issued a decision to dismiss nine imams on Oct. 31, 2019, based on court rulings stating that they belonged to the Muslim Brotherhood. Six imams were suspended from work on Jan. 25, 2014, for their participation in pro-Muslim Brotherhood demonstrations.

On Nov. 16, 2019, the Supreme Administrative Court of Egypt’s State Council looked into a lawsuit filed by lawyer Samir Sabry — who is well known in Egypt for being close to the authorities — calling on the state to issue decisions that would see all employees belonging to the Muslim Brotherhood dismissed from their public posts.

Sabry told Al-Monitor over the phone that he filed the lawsuit because the Muslim Brotherhood wanted to control all aspects of the Egyptian state after the January 25 Revolution and the group’s rise to power, and they issued numerous decisions appointing several members of the group to many state positions.

He said he filed the lawsuit because he thought the spread of Muslim Brotherhood members in government departments would affect the performance of said government, especially considering that such members belong to a terrorist group and it is inconceivable to allow them to stay in their positions.

Sabry said the ruling of the Court for Urgent Matters, issued on Sept. 23, 2013, prohibited the “activity” of the Muslim Brotherhood, and employees belonging to the terrorist Muslim Brotherhood are to be consequently dismissed.

The government source at the Ministry of Religious Endowments told Al-Monitor that all the decisions issued by the ministry to dismiss these imams are based on court rulings against them due to their affiliation with the Muslim Brotherhood. Such decisions, he said, are consistent with the law, as the Court for Urgent Matters’ 2013 ruling banned any affiliation with the Muslim Brotherhood, being a terrorist group, and any activities related thereto.

The source said the ruling prohibited all citizens from joining this group and all institutions from being affiliated with it. He added that all decisions to terminate the service of imams affiliated with the Muslim Brotherhood are legal decisions because they are based on judicial rulings.

Adel Ramadan, a human rights researcher with the Egyptian Initiative for Personal Rights, told Al-Monitor over the phone that the Egyptian Constitution has guaranteed freedom of opinion and expression, stressing that the dismissal decisions are not aligned with the constitution.

Article 65 of the Egyptian Constitution stipulates that “freedom of thought and opinion is guaranteed. All individuals have the right to express their opinion through speech, writing, imagery or any other means of expression and publication."

Ramadan said the state has for years adopted a hostile approach as far as the Muslim Brotherhood is concerned, and it currently adopts several punitive measures to tighten the noose around the group through security prosecutions, arrest campaigns, seizure and confiscation of funds, hazing of members within the government apparatus and dismissal of a large number of group members from various government positions.

He pointed out that the Ministry of Religious Endowments’ decision to dismiss a large number of imams violate the law because they are based on a ruling issued by the Court for Urgent Matters and not based on the provisions of the State Council, which is competent in this regard.

Ramadan said the Court for Urgent Matters has turned into a political tool in the hands of the state, adding that the court has been repeatedly used for political purposes and to issue rulings in favor of the state, most notably on Dec. 31, 2016, when it issued a ruling to hand over the islands of Tiran and Sanafir to Saudi Arabia.

He said the state chose Gomaa as minister because he is known for his open hostility toward the Muslim Brotherhood, as evidenced by his media statements about the importance of confronting the group. Gomaa had repeatedly said that the state must forcefully confront the group’s members because they are like corrupt members that need to be eradicated in order for the state to survive. This explains Gomaa’s role in issuing many decisions dismissing imams belonging to the Muslim Brotherhood, Ramadan concluded.