Egypt's Ministry of Religious Endowments has banished from the pulpit imams it says are members of the Muslim Brotherhood. 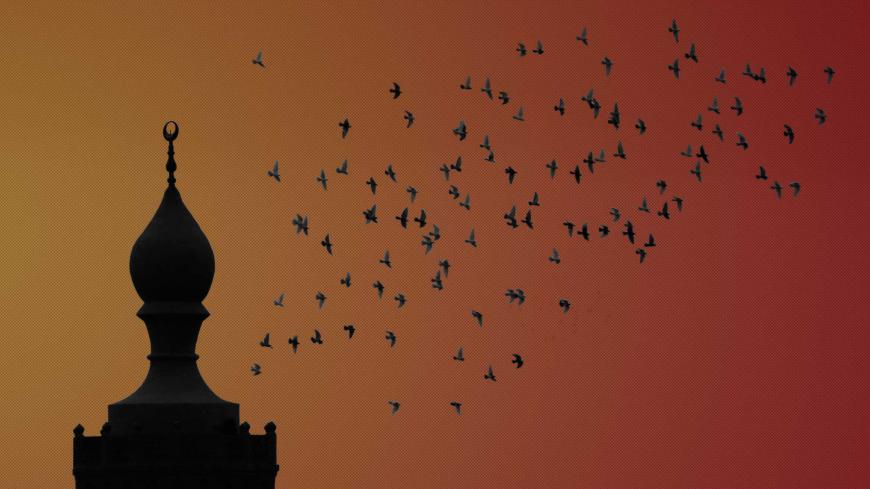 Birds are silhouetted as they fly during sunset over a minaret of a mosque on Mawlid al-Nabi, the birthday of Prophet Muhammad in the old Islamic area of Cairo, Egypt, Nov. 19, 2018. - REUTERS/Amr Abdallah Dalsh

CAIRO — The Egyptian Ministry of Endowments is continuing its campaign against the Muslim Brotherhood by dismissing 10 more imams, and the regime has similar plans for civil servants.

The ministry on Nov. 21 said the imams can no longer deliver sermons from pulpits because they are affiliated with the outlawed Islamist Muslim Brotherhood.

In a statement, the ministry said it was dismissing nine imams from the southern province of Sohag and another from Qalyubia province north of Cairo. The statement explained that court rulings had been issued against the preachers.

Sheikh Mahmoud Youssef, one of the dismissed imams from Sohag, told Al-Monitor he was surprised by the ministry’s decision, which he said was based on trumped-up security investigations and allegations by some residents. He said he had been a member of the Brotherhood at one time, but severed all ties with the group and its members once Egypt designated it a terrorist organization in December 2013. He said he will file a grievance with the ministry against the decision to dismiss him and will also challenge the decision before the State Council’s Administrative Court.

In its dismissal statement, the ministry completely disavowed the imams, effective immediately. It warned all mosques not to allow them to stand at a pulpit again.

The Court of Administrative Justice of the Egyptian State Council is scheduled to hear a case Dec. 28 examining a lawsuit filed by lawyer Samir Sabri, a close associate of the regime. Sabri is seeking a decision obliging authorities to dismiss all administrative civil servants who are Brotherhood members.

He recalled that the Egyptian judiciary on Sept. 23 had banned “all activities” of the Muslim Brotherhood.

A senior judicial source told Al-Monitor on condition of anonymity that the Ministry of Endowments’ decisions to dismiss imams and civil servants are legal. He noted that in the September ruling, the Egyptian Court of Urgent Matters also confiscated the group’s liquid, movable and immovable assets.

“Thus the decisions to dismiss Brotherhood members from the state apparatus would be legal, based on a judicial ruling. It is unreasonable to keep employees or imams who are members of a terrorist group," the source added.

On Sept. 20, Minister of Endowments Mohamed Mokhtar Gomaa said in a statement that identifying terrorists and traitors is a duty, and covering for any Brotherhood member is a betrayal of religion and the homeland. He argued that the state should strongly confront the Brotherhood, which he described as a bad limb that needs to be amputated to save the state.

According to legal researcher Ahmed al-Jadami, the regime chose Gomaa as endowments minister because he is loyal. “He adopts the regime’s approach to exclude any contravening parties, especially members of the Muslim Brotherhood."

Gomaa’s remarks clearly reveal his intention to dismiss all members and sympathizers of the group from the ministry, Jadami told Al-Monitor. “Brotherhood members represent a large percentage of civil servants at the ministry, which deals directly with religious affairs. This is a field where the Muslim Brotherhood is active as a religious advocacy group with political goals,” he said.

Unlike Gomaa, Jadami denounces the imams’ dismissals as illegal, explaining that they relied on the decision of the Court of Urgent Matters rather than on the substantive rulings of the State Council.

“Summary justice has become a political judicial tool in the hands of the government, especially after several judgments issued in favor of the state and in violation of the law," he said. “Let's recall the judgment issued by the Urgent Affairs Court on Dec. 31, 2016, validating Saudi Arabia’s sovereignty over the islands of Tiran and Sanafir.”