Why is Egypt's army now in the baby formula business?

While Egypt's army has long played a large role in the country's economy, recent steps taken by the armed forces in the baby formula and education sector have reignited fears about its financial power. 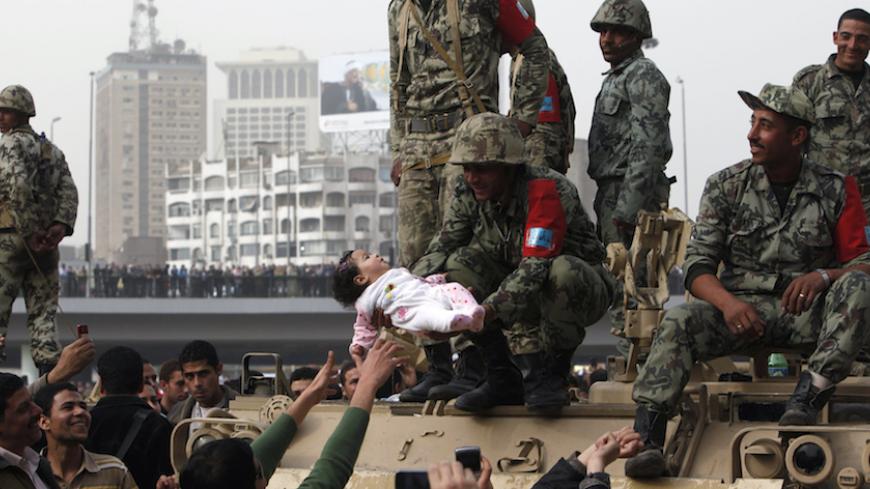 A protester reaches out as a soldier holds a child during a demonstration in Cairo, Jan. 29, 2011. - REUTERS/Asmaa Waguih

In his statement, the military spokesman warned citizens of being misled by rumors, saying, “Citizens must realize that the armed forces exert all efforts to ease the burden on ordinary citizens.”

This stirred a campaign of sarcasm and mockery on social networking sites criticizing the army’s repeated intervention in civil life sectors, including the education sector through Badr International Schools (BIS).

On its official website, BIS identifies itself as “one of the goals that the Egyptian armed forces has had for years now, and that is finally being implemented successfully by the primary decision-maker and supervisor himself, Egyptian President Abdel Fattah al-Sisi.”

The website adds, “We proudly follow the Egyptian armed forces’ code of conduct in order to pave the smoothest educational ways for each of our students.”

The Third Field Army Command has been involved in the school’s management to the extent that the Third Army commander himself is referred to as the “Chairman of the Board of Directors of BIS” on the school’s Facebook page.

Several photos were also posted on BIS’ Facebook page showing the visit of Fayza Abul Naga, Egypt's national security adviser to Sisi, in the company of a number of military leaders. The Ministry of Education had issued a decision in June 2016 to stop accepting new applications for licenses to establish international schools, a decision that must be analyzed in regard to the army’s intervention in the field of private education.

The successive news about the army’s economic intervention in civilian life was met with broad dissatisfaction in the streets and on social media, which reached the point of mocking the military institution.

The Institute of Arab Studies published a research paper in which it indicated that the army’s economic expansion strategy is based on securing market shares and does not aim to dominate the economy’s sectors. The paper noted that the original motive behind the army’s creation of a parallel civilian economy is the need to provide the necessary logistics for the army’s large staff so as to continuously meet investments and consumer needs.

The researchers concluded that the problem lies in securing the economic rent and not competition in production. Even if the army does not have the ability to dominate as an economic player, it enjoys a broad and unique fundamental influence represented by the regulatory and legal powers conferred to it in terms of public land planning, allocation and management.

This is the main problem in the army's involvement in economic activities, because this influence affects the growth capacity of the private sector and the economy as a whole. The army uses its legal powers and its control of public lands, especially desert lands, to generate various forms of economic rent.

Last year the economic scope of the army expanded in a number of sectors, most notably the government contracting sector, through the assignment of business management to authorities or companies affiliated with the army.

The armed forces are also working in various other fields such as health, energy, education, roads and bridges, and a number of commercial projects related to food, fish farming and the production of air conditioners.

The armed forces have a number of legislative and political advantages. In April 2012, the Egyptian parliament approved amendments to the Code of Military Justice issued under No. 25 of 1966 granting the military courts exclusive jurisdiction to examine illicit gain action against armed forces officers. It should be noted that numerous army facilities are exempted from taxes by virtue of decisions issued by the Ministry of Defense.

On the other hand, most governors in Egypt are retired army officers, and numerous private sector companies and other large public institutions employ retired major generals. More than 80 major generals, including those who retired from the police service, are members of the Egyptian parliament.

The army’s intervention stirred a notable wave of anger in Egypt’s streets. Yet following the departure of Minister of Civil Supply Khaled Hanafy from the ministry in the wake of a corruption scandal related to wheat silos, a retired army general who was responsible for the supply department of the military was appointed in his place on Sept. 7.

In November 2015, Transparency International gave Egypt a grade of “F” in its Government Defense Anti-Corruption Index. According to the organization’s website, this index “assesses the existence, effectiveness and enforcement of institutional and informal controls to manage the risk of corruption in defense and security institutions.”

Transparency International indicated that the defense sector’s involvement in the private sector leads to the risk of corruption in a number of countries in the region, including Egypt, Iran and Yemen, since the profits reaped by the Defense Forces (or their members) are rarely known, which is exacerbated in light of no available details on defense spending.

It noted that the Egyptian armed forces since 1979 was allowed by law to have commercial bank accounts and their budget is independent of the rest of the government.

This comes following fears of diminished oversight, after Sisi issued a decree in March 2016 relieving Hisham Geneina of his post as head of the Central Auditing Organization, the largest state watchdog agency.