Will Egyptian parliament cut into the military's profit margin?

The Egyptian army’s strength may hinder any attempt at limiting its economic activities. 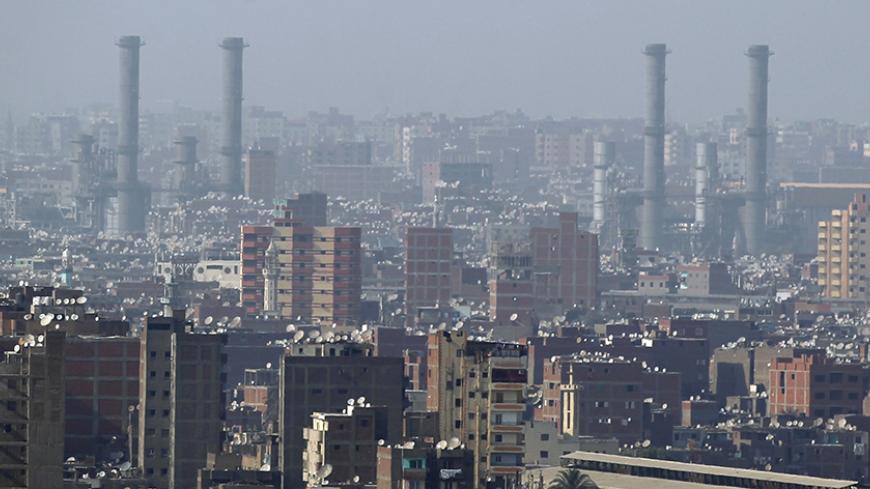 Narrow houses and numerous factories dominate the skyline in downtown Cairo, May 22, 2014. The Egyptian Armed Forces are a major economic player in the country, controlling 35-45% of economic activity by some estimates. - REUTERS/Amr Abdallah Dalsh

Egypt's politicians are preparing to do battle against its army. A number of lawmakers in the country's recently elected parliament are working on laws designed to provide answers to questions about the army's money and its place in the national budget.

“Armies are the basis of the administration and the administration is everything,” Maj. Gen. Mahmoud Nasr said at a conference four years ago on the role of the Egyptian Armed Forces (EAF) in supporting the economy through the institution’s many projects. At the same conference, held in Cairo and organized by the Supreme Council of the Armed Forces, he stressed that the so-called "army economy" is not derived from state funds, but rather from returns on Ministry of Defense projects.

The Defense Ministry’s projects and finances have long lacked transparency, and many critics have questioned whether its funds constitute a black-market budget. Some estimate the size of the army’s economy at 35-45% of the Egyptian economy. President Abdel Fattah al-Sisi denied both assertions during his election campaign. In a May 2014 interview with Reuters, Sisi said the correct number was no more than 2%.

The army’s wealth comes through what is owned by the EAF’s ministries, military production and subsidiary bodies or economic institutions. The Armed Forces Land Projects, a government agency affiliated with the Ministry of Defense, is tasked with creating investment projects (housing, commercial centers, administrative units, parking areas) on EAF-owned land to serve the civilian sector. But the agency isn't required to reveal the lands it owns or how it came to own them.

Among the most prominent of the army’s economic bodies is the Arab Organization for Industrialization, launched in 1975 as a partnership with Saudi Arabia, Qatar and the United Arab Emirates to establish an Arab common defense industry. But after Egypt signed a peace treaty with Israel in 1979, the Arab states withdrew their shares and the Egyptian government became the organization’s only owner.

Also in 1979, the army created the National Service Projects Organization to become self-sufficient and avoid relying on the private sector for its needs. The agency lists the companies it owns on its website. The companies operate in numerous sectors such as construction, cleaning, agriculture and food products, and they sell their surpluses in the domestic Egyptian market.

The army’s economic empire extends to public lands that are not declared in any document or official statement. They come to light when projects are planned on vital land. After investors become deeply involved in projects, they sometimes discover that the lands in question belong to the army or are disputed between the army and the police, which are represented by the Ministries of the Armed Forces and the Interior, respectively, according to parliament member Moataz Mahmoud, who spoke with Al-Monitor in a recent interview.

Mahmoud supports legislation known as Dominion of the Land (Wilayat al-Ard), which mainly aims to limit how much land the Egyptian army and the Ministry of Interior can own and to codify it as much possible. According to Mahmoud, existing laws are onerous for Egyptian and foreign investors. He would like to pass a series of new laws, such as Dominion of the Land, that clearly define state land ownership and protect property rights.

In addition to ruffling the military's feathers, this legislation is expected to trigger a confrontation among parliament members. A number of international and domestic media outlets have reported that Egypt’s military intelligence pushed certain people to run in the elections, seeking to boost the army's political influence even more.

In this context, a parliamentarian who spoke on condition of anonymity pointed out that the army’s economic assets keep expanding year after year but that “the national interest makes it imperative for parliament in general to not open this case." He stressed that the army does not interfere with the economy or work against anyone, and that it “fills an economic void to provide goods that the state could not provide.” He did concede, however, that the army uses conscripts as laborers in its production operations, making its companies more competitive than the private sector.

From 2012 to 2014, the Engineering Authority implemented 473 strategic and service projects.

A military source in EAF's Engineering Authority told Al-Monitor that projects of the EAF and its affiliates are not subject to any kind of oversight, not even by parliament.

The source said that the expected clash between the army’s economic arm and the parliament members who support the legislation could prevent its passage, or at least prevent its application to the EAF, which is a sovereign body with economic and legal influence surpassing that of parliament members. Parliament is not allowed to examine the army’s budget, which is the responsibility of the Defense and National Security Committee alone in cases of extreme necessity.

The source said projects assigned to the army’s economic agency are always done directly through the Council of Ministers or the relevant ministries. In an attempt to create confidence between the agency and businesspeople, the agency sometimes enters into partnerships, such as the partnership with Osman Ahmed Osman and his company, Arab Contractors.