Egypt plans to list army-owned companies on the stock exchange before the end of the year, after repeated delays. 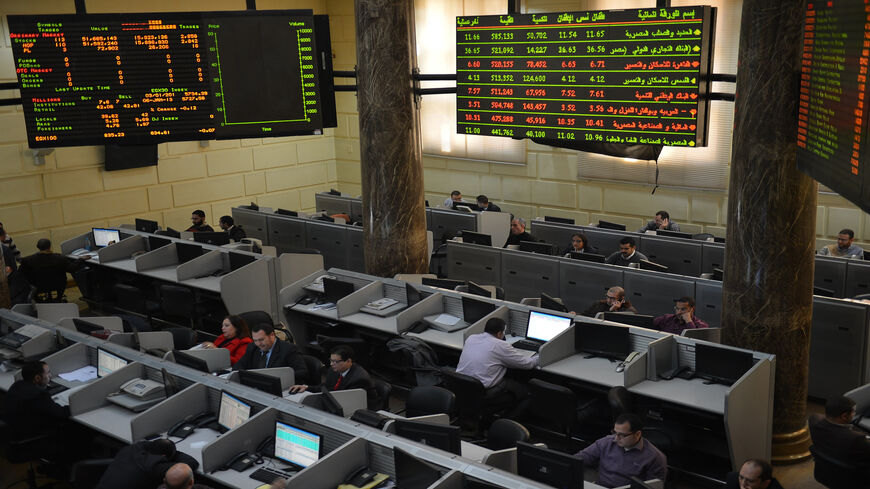 Egypt is planning to list army-owned companies on the stock exchange before the end of the year, as part of a plan to include the private sector in the management of state-owned assets.

The decision to make state-owned companies public in Egypt is not new, but it has been repeatedly postponed.

In a speech at the Egyptian Family Iftar Banquet held in Cairo April 26, President Abdel Fattah al-Sisi announced that he has assigned his government to launch a program for the private sector’s participation in state-owned assets worth $10 billion annually for a period of four years, in addition to listing army-affiliated companies in the stock exchange.

Sisi did not speak of the nature or the number of companies affiliated with the Egyptian army that will be listed on the stock exchange.

The head of the Sovereign Fund of Egypt, Ayman Soliman, had told Asharq Business site April 21 that two companies — the Wataniya Petroleum company and the National Corporation for Natural Water in Siwa, both owned by the army — are being prepared for private and public placement in the Egyptian stock market before the summer.

Sisi’s announcement comes as Egypt is in the midst of an economic crisis worsened by the Russian war on Ukraine. In light of this, Egypt devalued the local currency by 15%, while authorities are currently in talks with the International Monetary Fund over an Egyptian request for emergency financial assistance to overcome the repercussions of the war.

Yezid Sayigh, senior associate at the Carnegie Middle East Center, told Al-Monitor that listing army-owned companies on the stock exchange is part of Sisi's general effort to reduce the state’s financial burden while increasing capitalization of state-owned companies and monetization of state agencies and assets.

However, Sayigh, whose work focuses on the comparative political and economic roles of Arab armed forces, and the impact of war on states and societies, doesn’t see a significant or direct link between Sisi's instructions and the country's current financial circumstances, as Sisi has been calling for listing military companies on Egypt's stock exchange for years.

Meanwhile, the Egyptian government is getting ready to announce this month its plan to disengage from a number of economic sectors so as to boost the private sector’s participation.

In his April 26 speech, Sisi said that he will increase support for the private sector in the next stage to boost its role in the nation’s economic growth, adding that all possible resources will be provided to create the necessary environment to achieve that.

Since he took office in the summer of 2014, Sisi has launched massive national infrastructure projects, most prominently the building of a new capital in the desert east of Cairo.

Meanwhile, the Egyptian army owns dozens of companies operating in various sectors, including in the industrial and service sectors. Some 60 companies affiliated with the army operate in 19 industries in Egypt out of a total of 24 industries of the Global Industry Classification Standards, according to a December 2020 study by the World Bank Group.

The National Service Projects Organization — a Ministry of Defense-affiliated company that provides military and civilian products and contracting services, and which is considered the army’s economic arm — alone runs more than 30 companies operating in the construction, materials, food, mining and petrochemical sectors.

Economic analysts and businessmen believe that the army’s competition with the private sector in the economy creates unfair competition and impedes the flow of foreign investments, given that the army, the country’s most powerful institution, has strong influence.

Egyptian businessman and billionaire Naguib Sawiris said in November 2021 that state-owned companies compete with the private sector. “Government-owned or military-affiliated companies do not pay taxes or customs. … so the competition is unfair from the start,” Sawiris said in an interview with AFP. He called on the government to be a “regulator of economic activity, not an owner.”

The military economy achieved remarkable growth in the past years, as it is entrusted with several national projects, including in the infrastructure sector. Army-owned companies establish partnerships with private sector groups to have them participate in the implementation of these projects, including with Orascom Construction, owned by the Sawiris family.

Despite these figures, Prime Minister Mustafa Madbouly said in January that the military institutions are involved in less than 1% of the Egyptian economy.

In a TV interview, Madbouly noted that the world governments always invest in strategic sectors related to national security and economic stability.

This is not the first time that Sisi expressed his intention to list military companies on the stock market. In 2019, he made more than one statement about the listing of some military-owned firms on the stock exchange along with other state-owned companies that would be privatized. At that time, he described the army’s partnership with the private sector as “a necessity to meet strategic needs or to reduce prices.”

The government sought for years to sell shares in state-owned companies through initial public offerings. However, its efforts were obstructed by instability in the global market and later the coronavirus pandemic.

So far, the government managed to sell an additional stake in Eastern Company SAE, which is already listed on the stock exchange. It also listed the state-owned E-finance Digital and Financial Investments in October 2021, and sold 10% of Abu Qir Fertilizer Company’s shares in December 2021.

The government had planned to list 10 state-owned companies on the stock exchange this year, before the Russian war on Ukraine and subsequent market instability.

The Russian war has taken a toll on Egypt, the world’s largest wheat importer, as more than 80% of its wheat imports come from Russia and Ukraine. The Egyptian tourism sector is also at stake due to the reduced number of Russian and Ukrainian visitors, which made up for about a third of the total number of tourists visiting Egypt each year.

A few days after the Russian invasion of Ukraine Feb. 24, foreign investors withdrew about $3 billion out of Egypt, amid growing fears that emerging markets would be more exposed to trade disruption shocks, including the subsequent increase in basic commodity prices.

However, Sayigh said that listing military companies in the stock exchange requires preparatory measures and conditions that he believes the military finds problematic, such as providing full disclosure of company finances and allowing private shareholders meaningful control.

He noted that the military may be resisting Sisi's calls, maybe in the same way that it has failed to deliver a clear and dependable legal and judicial framework to govern business partnerships between military and private civilian companies, even though Sisi clearly seeks greater private sector investment in state-led projects.