As Egypt finds new ways to promote tourism in the time of the coronavirus crisis, the Czech Republic is hosting an exhibition of Egyptian antiquities found by a Czech archaeological mission. 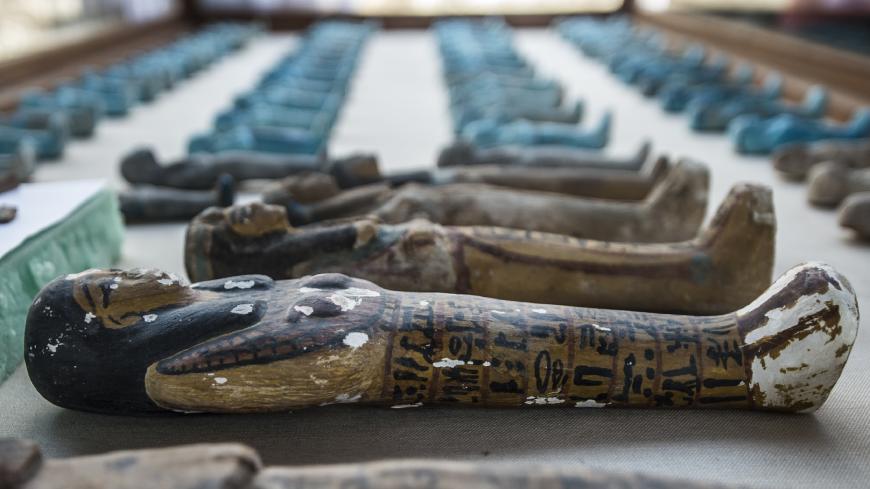 A picture taken on Sept. 9, 2017, shows small funerary statues carved in wood, clay and limestone found at the site of a newly uncovered ancient tomb for a goldsmith dedicated to the ancient Egyptian god Amun, in the Draa Abul Naga necropolis on the west bank of the ancient city of Luxor.

As Egypt works to revive its tourism sector amid the coronavirus crisis, the government is promoting Egyptian antiquities abroad with an archaeological exhibition called “Kings of the Sun” in Prague, Czech Republic.

The exhibition, which will run from Aug. 30 until Feb. 7, 2021, will display 90 artifacts unearthed by the Czech archaeological mission working on the site of Abu Sir in Giza governorate. Chief among these treasures is the head of a statue of King Ra-Nefer-F.

The Czech archaeological mission has made many discoveries in Egypt since it began work in 2012, especially in the Abu Sir area, where it uncovered an enormous tomb in 2018 and the remains of a temple of King Ramses II of the New Kingdom in October 2017.

In May 2020, Secretary General of the Supreme Council of Antiquities Mostafa Waziri discussed with Czech Ambassador to Egypt Jan Folik the possibility of holding an exhibition of Egyptian antiquities at the National Museum in Prague. In June 2020, Assistant Foreign Minister for European Affairs Badr Abdel Ati met with the Czech deputy foreign minister for non-European affairs to discuss strengthening cooperation between the two countries, especially in the field of tourism. They agreed that the Prague exhibition will greatly benefit the relations between Egypt and the Czech Republic.

Kings of the Sun was scheduled to run from June 2020 to October 2020, but the exhibition was postponed amid the suspension of flights and the inability to transfer artifacts from Egypt to the Czech Republic.

The website of the Czech Republic's National Museum announced that with the help of audio-visual materials, the Kings of the Sun exhibition will display the history of the archaeological area of ​​Abu Sir, where a royal burial ground with three pyramids was built during the Fifth Dynasty. Kings of the Sun will also include artifacts from the Egyptian Museum in Tahrir and the Grand Egyptian Museum, alongside those unearthed by the Czech mission in Abu Sir.

According to the museum, the exhibit includes "treasures from the 3rd to the 1st millennium BC, such as the unique royal statue of King Raneferef, one of the four pharaohs buried in Abusir, [and] an extensive collection of statues from the tombs of Princess Sheretnebty and the scribe Nefer. The news of their discovery travelled the world in 2012."

The Egyptian Ministry of Antiquities exhibited sunken antiquities in “Sunken Cities: The Enchanting World of Egypt” in a number of countries abroad in 2015. The exhibition kicked off in 2015 in France. In May 2016, the exhibition moved to the British Museum in England. In February 2017, the Egypt’s Sunken Mysteries exhibition opened in Switzerland.

In March 2018, the journey of Egypt’s Sunken Mysteries exhibition toured the United States before settling in the US state of Virginia in July 2020.

Waziri told Al-Monitor, “The Kings of the Sun exhibition to be held in the Czech Republic will bring economic returns to Egypt and will attract tourism.” He said, “The Czechs are keen to take advantage of the value and greatness of Egyptian antiquities to stimulate visits to museums in the Czech Republic,” adding that the Ministry of Antiquities is working on a number of agreements with other countries to host similar exhibitions.

Raafat el-Nabarawy, a professor of Islamic archeology and former dean of the Faculty of Archeology at Cairo University, told Al-Monitor, “The coronavirus pandemic crisis has negatively affected tourism in Egypt and the rest of the world, and so the state is relying on archaeological exhibitions abroad to stimulate tourism.”

Nabrawi said, “Cooperation with the Czechs in the field of antiquities will encourage European countries to contribute to the excavation of antiquities in Egypt and help us unearth them.”