The Egyptian Ministry of Tourism and Antiquities announced the discovery of the wreck of a warship from the Ptolemaic period as well as the remains of a Greek funerary area dating back to the beginning of the fourth century BC. 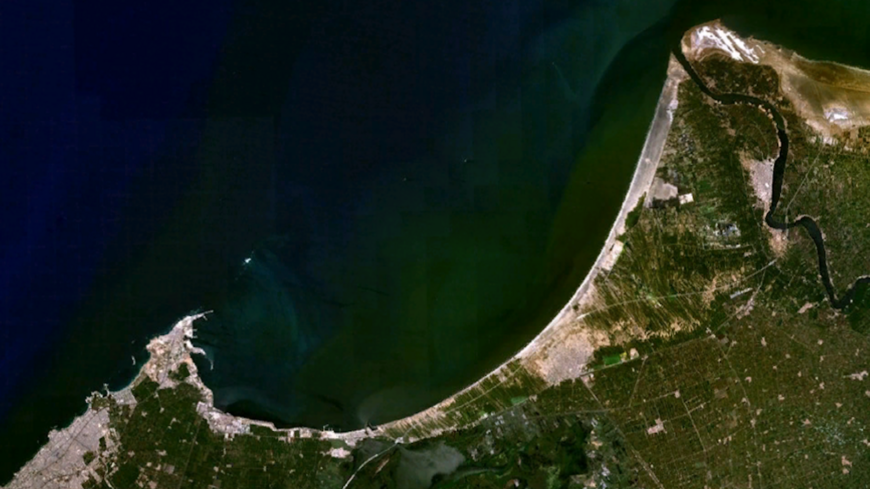 CAIRO — The Egyptian Ministry of Tourism and Antiquities has shared the discovery of the wreck of a warship from the Ptolemaic era and the remains of a Greek funerary area dating back to the beginning of the fourth century BC, in the sunken city of Heracleion in Alexandria's Abu Qir Bay.

Head of the Supreme Council of Antiquities in Egypt Mustafa Waziri said in a July 19 statement, “The ship was moored in the canal that flowed along the upper side of the Temple of Amun. It sank after being hit by huge blocks falling from the temple of Amun, which collapsed due to a cataclysmic earthquake that occurred in the second century BC. The falling stone blocks pinned the ship down under the deep channel.”

Ehab Fahmy, head of the underwater archaeology department at the Egyptian Ministry of Tourism and Antiquities, told Al-Monitor the Egyptian-French archaeological mission of the European Institute for Underwater Archeology (IEASM) has been working in the city of Heracleion for a long time. “A few days ago, the mission found the warship wreck under around five meters of mud at the seabed.”

Fahmy stressed the importance of this discovery, noting that finds of this type of ship are rare, with only one previous discovery dating to the same era. “This discovery may give us better information about that time period. The shipwreck was built using a mixture of the Egyptian and Greek methods. It was navigable in the Nile and the seas alike.”

He further noted that the remains of a Greek funerary area indicate the presence of Greek merchants who lived in Heracleion city at the time. “These merchants controlled the port, which meant the entrance to Egypt, and they erected their funerary temples near the main temple of Amun,” Fahmy said.

Hussein Abdel Baseer, director of the Antiquities Museum at Bibliotheca Alexandrina, told Al-Monitor, “This discovery is a major addition to Egyptian antiquities. It dates back to the Ptolemaic period and was found in the city of Heracleion, which for centuries was the largest port in Egypt on the Mediterranean. The city was established in the 26th Dynasty — that is, before the founding of the city of Alexandria itself by Alexander the Great in 331 BC.”

The Ministry of Antiquities said in its statement, “Several earthquakes followed by tidal waves caused land liquefaction, causing the collapse of a 110-square-kilometer (68-square-mile) section of the Nile Delta beneath the sea. The cities of Heracleion and Canopus that were submerged were rediscovered by the IEASM mission in cooperation with the underwater archaeology department at the Ministry of Tourism and Antiquities, in 1999 and 2001, respectively.”

Abdel Baseer said the discovery is unique. He said, “Recently, we have been extracting coins or small antiquities, statues, pots and figurines of the kings of the 26th Dynasty. This find pushes us to review historical findings and the movement of trade before the establishment of the Alexandria port.”

IEASM head Frank Goddio said in a statement on July 19 that the discovery of such ships from that time is very rare and that Hellenistic ships of this type were heretofore completely unknown. The only other comparable discovery is the Punic Marsala Ship dating to 235 BC.

Goddio added that preliminary studies indicate that the warship was more than 25 meters long. He noted that the hull was built with classic traits of that era, but also shows features of ancient Egyptian construction.

According to Fahmy, “Egypt has a large volume of sunken antiquities. The recent discovery consists of the remains of only one city that was a trade hub in Egypt.”

He pointed out that Egypt is showcasing many of its antiquities discovered underwater in the traveling exhibit "Treasures of Ancient Egypt: Sunken Cities."

From June 2020 to January 2021, the Virginia Museum of Fine Arts in the United States hosted the Treasures of Ancient Egypt: Sunken Cities exhibition and its nearly 300 pieces.

Abdel Baseer believes that sunken antiquities will become even more important in the world of Egyptian antiquities. “Numerous antiquities can be found in the Red and Mediterranean Seas as well as in the Nile,” he said, adding that there should be an underwater museum for antiquities sunken in the Mediterranean and the Red Seas.