Cairo is celebrating the discovery of another portion of a ship sunk in the Red Sea in the 18th century carrying a treasure trove of artifacts. 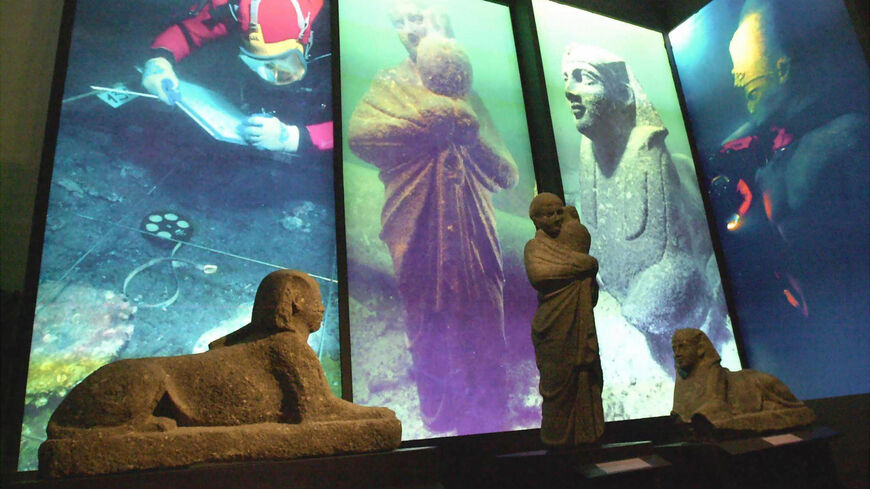 This picture taken Oct. 4, 2003, shows statues from the Ptolemic period that were found in the Mediterranean Sea off the coast of Alexandria at the Egyptian northern port's National Museum. - AHMAD HUSSEIN/AFP via Getty Images

The archaeological mission of the Faculty of Arts of Alexandria University recently discovered the bow of a sunken ship near the Red Sea island of Saadana with 1,606 artifacts. Other parts of the ship had been uncovered earlier during excavation work in 1994.

The sunken ship is a merchant vessel dating back to the mid-18th century. It carried hundreds of artifacts, including porcelain, pottery of various shapes and sizes in addition to various grains. Studies revealed the ship likely collided with the coral reefs in the area when it sailed from southeast Asia to Egypt.

In March, Egypt wrapped up “The Secrets of Sunken Egypt” exhibition's tour to Europe and the United States that featured 293 artifacts discovered in the Mediterranean Sea near Alexandria. The exhibition, which began touring in 2015, included artifacts that were displayed at the Egyptian Museum in Tahrir Square, the Alexandria National Museum, the Greco-Roman Museum and the Library of Alexandria Museum, as well as discoveries made by the Department of Underwater Antiquities.

Ehab Fahmy, head of the Supreme Council of Antiquities' Department of Underwater Antiquities, told Al-Monitor that the archaeological mission of the Faculty of Arts at Alexandria University found the middle part of the sunken ship and hundreds of artifacts.

Fahmy added, “Some 1,606 artifacts were found and extracted from the ship found in the Red Sea and dating back to the mid-18th century, during the Ottoman era. The finds will be showcased in the Hurghada Museum and the Maritime Museum in Alexandria after their restoration.”

Fahmy confirmed that there are other submerged antiquities in the areas of Abu Qir Bay, the eastern port, Qaitbay Citadel, the Gulf of Maamoura and Shatby that are currently being extracted.

Egyptologist Bassam al-Shammaa told Al-Monitor that because Egypt is on a major historical trade route. He said, "The Maritime Museum in Alexandria is home to a number of artifacts, including plates, utensils and ceramics." The museum will keep and display the artifacts in saltwater to protect them, he explained.

Shamaa said that the sunken ship was discovered due to the great efforts of the archaeological mission and its difficult underwater excavation work. “The state must make a complete survey of the Nile River, especially from Aswan to Luxor, where the pharaohs had transported many monuments. Sunken artifacts are likely to be found there,” he said.

Mohamed Hamza, the former dean of the Antiquities Faculty at Cairo University, told Al-Monitor that when the ship sunk, “Egypt played a major role in [world] trade due to its strategic position on the Red Sea, the Mediterranean and the Nile River. … The discovery of the ship and its cargo, which included Chinese porcelain, proves that the ship was coming from southeast Asia, specifically from China.”

Hamza continued, “The abundance of coral reefs in the Red Sea [may] have caused the ship to sink, as coral reefs were the main reason behind such accidents. The [remains] of more remains of Egyptian or peninsular ports dating back to the Islamic, Ptolemaic and Roman eras may yet be found in the Red Sea. Egypt had strong commercial ties with China throughout history, and the two countries constantly exchanged ambassadors and gifts, including during the Mamluk period. I believe that after the ship’s cargo is analyzed, more details about the nature of this relationship will be revealed.”