Turkey hopes visitors from the United Kingdom will help offset the deep losses its coronavirus-hit tourism industry is expected to suffer this summer season and is pushing the European Union to reconsider its "safe list" that excluded the Mediterranean destination. 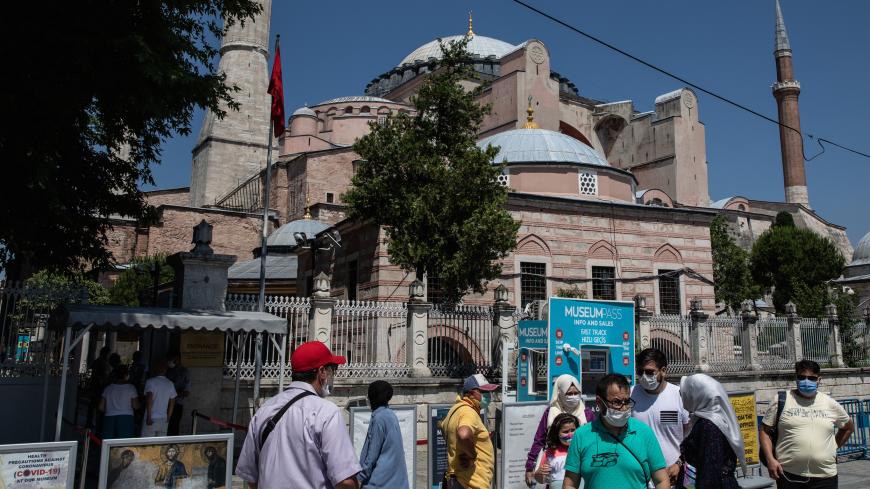 ISTANBUL — Britain is scrapping a quarantine requirement for Turkey this week, offering a lifeline to a tourism industry hard hit by the coronavirus pandemic and snubbed by the European Union, which excluded the Mediterranean country from its “safe list” of countries for travel.

The pandemic has plunged the world’s tourism industry into free fall as countries imposed strict travel restrictions and canceled international flights earlier this year to stop the spread of the deadly disease. The United Nations said losses in tourism will shave at least 1.5% off of the global economy this year.

Tourism accounts for about 10% of Turkey’s economy, brings in tens of billions of dollars in hard currency and employs millions of people. International travel restrictions crushed the industry in April and May, the traditional start of the season, when a mere 54,000 foreigners arrived in Turkey, compared to 7.3 million in the same two months of 2019.

In a bid to lure back visitors this summer, the Tourism Ministry unveiled a “safe tourism” initiative last month. The concept applies to airports, transportation, hotels and tourism sites such as archaeological parks and museums. Measures include social distancing, limits on capacity and regular disinfection of shared spaces. Some 500 hotels, restaurants and other businesses have been certified after they met dozens of hygiene requirements.

The initiative includes free coronavirus testing at airports for visitors who exhibit symptoms and medical treatment for those who test positive with the purchase of insurance that costs between 15 and 33 euros ($17-$37). Tourists can receive treatment that follows Turkey’s drug protocols either at hospitals or hotels that have set aside special quarantine floors.

The efforts may have helped convinced the British government to include Turkey last week on a list of 70-odd countries and territories where a 14-day quarantine rule for those returning to England will not apply beginning this Friday. Scotland and Wales have not yet announced whether they will offer the same exemption.

Turkey hopes the initiative will entice some of the 2.56 million British holidaymakers who visited in 2019. Britain’s ambassador to Ankara, Dominick Chilcott, was quoted as saying on Wednesday he was “impressed” by the Turkish industry’s safety measures and he hoped British tourists would continue to choose Turkey as a top destination.

His comments came as Turkish Foreign Minister Mevlut Cavusoglu traveled to Britain on Wednesday to meet his counterpart Dominic Raab to discuss tourism and other issues. Cavusoglu said the two nations would sign a free trade deal, part of the two nations’ close alliance amid their own issues with the EU.

The green light from Britain will not make up for the loss of European tourists, who accounted for about 40% of Turkey’s visitors last year. Last week, the EU excluded Turkey from its list of 14 countries where self-isolation is not required upon the return home, and such lengthy quarantines will likely deter travel to places like Turkey.

Cavusoglu hosted the EU’s top diplomat, Josep Borrell, this week to tackle a myriad of disputes and accused the EU of failing to base its list on “objective criteria” by including some countries with a poorer record on the outbreak. At their joint news conference, Borrell rejected the assertion the list was not objective and said it was strictly based on each country’s health situation.

President Recep Tayyip Erdogan earlier lashed out at Brussels for excluding Turkey for “political, not health reasons.” The Foreign Ministry said it expected a “correction of this mistake” when the bloc reviews the list in mid-July.

Low infection rates and transparent data reporting were required to make the EU list. Turkey has been hit hard by COVID-19, reporting some 208,000 cases. The government re-opened restaurants, beaches and museums on June 1 and the country soon saw new daily cases spike.

Turkey drew nearly 52 million foreign visitors last year, making it the world’s sixth most popular tourism destination. It may see a 70% drop in tourists in 2020, estimated Bahattin Yucel, a former tourism minister. “People just don’t want the risk for a holiday,” he said.

Yucel praised the safe tourism initiative for including international accreditors to boost transparency, but said the government’s failure to regularly release full details on the outbreak had undermined confidence abroad.

Turkey does not count patients treated for COVID-19 if they test negative, and until recently declined to provide regular regional or demographic breakdowns of the data. But it boasts one of the lowest overall death rates in Europe at 2.5% of reported cases and credits a robust health care system, partial lockdowns and innovative drug therapies for saving lives.

Among the drugs Turkey gives all patients is the controversial malaria treatment hydroxychloroquine. Der Spiegel reported last week Germany has refused to lift a travel warning for Turkey for fear that its citizens will be treated with the drug if they fall ill. Research has been mixed on whether hydroxychloroquine is safe and effective for COVID-19 sufferers.

Turkey is among Europe’s most affordable destinations, easily beating out Mediterranean rivals like Spain and Greece. “Turkey has always attracted lower-income tourists, and that segment’s spending power has been especially hard hit by their own countries’” economic downturns during the pandemic, Yucel noted.

But thousands of miles of coastline, unmatched historical ruins and a culture of hospitality will continue to draw intrepid visitors despite the risks.

“I’ll go as long as the plane takes me. Turkey is paradise to me,” said Wales' Andrew Hughes, who has booked a September holiday in the southern resort of Fethiye. It will be his 38th visit since 1997 to the beachside town, also home to about 5,000 British expatriates.

Hughes, 54, brushed off the risk of infection, citing Turkey’s culture of cleanliness and strict rules on mask wearing. “And if I die in Fethiye, I’ll die happy,” he added.