Some 40,000 Russian holidaymakers have thrown a life jacket to Turkey’s main touristic hub of Antalya, while other coastal areas count on locals to keep afloat. 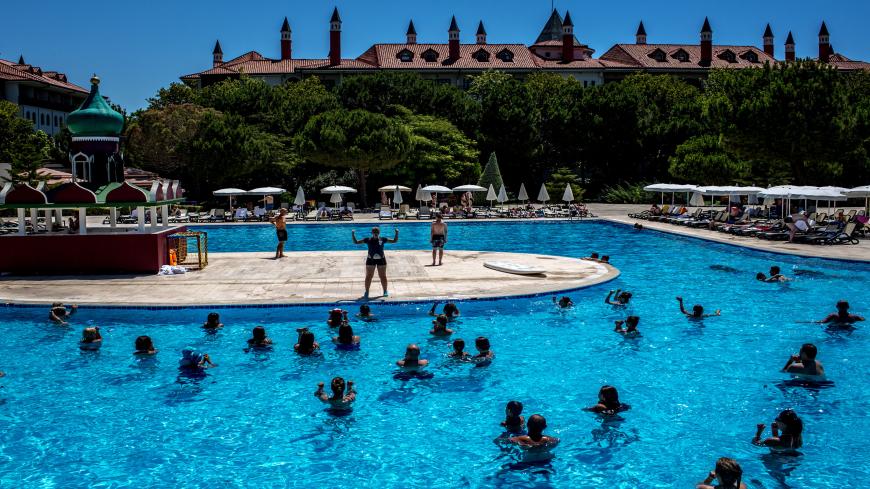 CESME, Turkey — Rustic ropes separate beach chairs, placed in pairs under the shade of straw umbrellas, on the sandy beach of Altin Yunus, one of the oldest resorts in Turkey’s Aegean coastal town of Cesme, 70 kilometers (43 miles) from Izmir. On a recent August weekend, only a third of them are occupied and the hotel’s usual clientele of German, Dutch and Russian tourists is replaced by a handful of local clients, most of whom pointedly keep their distance from each other as they walk on the seafront. But cross to the adjacent public beach and the change is striking: Large groups sit closely on foldable chairs and fraternize. Older bathers, the most vulnerable group in the coronavirus pandemic, gather for a backgammon tournament. The only face masks in sight are those swept to the shore by the waves, half-buried in the sand. Images of golden youths partying on posh beaches are even more alarming.

Local officials, from mayors to police chiefs, make highly publicized inspections to the beaches and other touristic locations on the Aegean coast to drive home the point that the government’s safe vacation measures — which include distancing of 2 meters (6.5 feet), a buffet ban and servers obliged to wear masks — are religiously enforced. Following warnings of flare-ups after the Muslim holiday of Eid al-Adha in early August, the local health authorities have closed down 11 restaurants, beaches, bars and cafes in Cesme for disregarding social distancing and hygiene measures. Last week, Suleyman Soylu, Turkey’s iron-fisted interior minister, replaced the district governor of Cesme, allegedly for failing to ensure that beach clubs and restaurants toe the line.

On Aug. 12, Health Minister Fahrettin Koca said the precautions against the pandemic were not at the “desired level,” warning of a tough second wave in October and November if people let their guard down. But unlike his previous statements, the minister carefully avoided mentioning touristic spots and expressing concern over the lack of masks and social distancing and a general slackening of precautions in coastal areas.

His silence on this issue followed the arrival of a large group of Russians to the Mediterranean city of Antalya, a major touristic hub, as both the Tourism Ministry and local authorities trumpet Turkey as a venue of “safe vacation.” Earlier on Aug. 12, Antalya Gov. Ersin Yazici announced that the number of tourists arriving from Russia had reached 40,000 in the past two days. He hastened to add that all necessary measures against the coronavirus were in place, including quarantine floors in hotels. “I hope the German tourists will come soon and the tourism sector will be more active,” he said.

Riza Percin, the East Mediterranean president of the Association of Turkish Travel Agencies, told local media that some tourism operators had actually wept with joy at the long-awaited arrival of foreign tourists.

The arrival of Russian holidaymakers in Antalya, which hosted some 5.6 million Russians last year, follows Germany’s partial lifting of its coronavirus travel warning for Turkey. “Destinations with low rates of infection such as coastal Antalya, Izmir, Mugla and Aydin are now exempt,” the German Foreign Ministry’s Aug. 4 travel advisory said.

The Organization for Economic Cooperation and Development said that the virus that causes COVID-19 is likely to cause a 60% decline in international tourism in 2020, and that the decline may well reach 80% if recovery is delayed until December. For Turkey’s tourism and travel sector, which accounts for 12% of gross domestic product and provides employment to 1.5 million people, the blow of the pandemic has been devastating, much to the chagrin of Tourism Minister Mehmet Nuri Ersoy, who, encouraged by the growth in tourism in 2019 after five stagnant years, had outlined an ambitious 2023 Tourism Strategy aiming to lure 75 million tourists annually.

Since June, Ankara has coupled diplomatic efforts to relax the European Union tourist ban on Turkey with an aggressive campaign on how it is enforcing “healthy tourism.” In late June, Ersoy took some 50 ambassadors and tour operators to Antalya for the launch of the ministry’s new campaign “ReTurkey” promoting the new “healthy tourism certificate” program. He assured that the certificate, which requires compliance with 130-odd criteria, including buffet bans and quarantine, met the highest standards.

“We are ready to help any government that wants to implement similar programs,” he said, with a touch of arrogance.

Since then, tourists from Britain, Israel, Ukraine and now Russia have started arriving in Turkey, but this may be too little too late. “Chances of considerable recovery in the tourism sector are slim. At this point, only a handful of foreign tourists from Europe would come and they would be low-budget tourists,” Saffet Emre Tonguc, a tour guide and award-winning travel writer, told Al-Monitor.

Tonguc has been touring Turkey’s coasts since June to put together a new book on big hotels that are safe to stay in during the coronavirus pandemic and was on his way to Antalya as he spoke to Al-Monitor. “Some of the hotels have remained closed because it is a major expense to put in place the measures required to get a certificate. Given that there are few local tourists and even fewer European travelers, some simply did not open their doors,” he said. “But those who are open are in good shape. Of course, it is not only the responsibility of the hotels — the customers need to be careful too.”

Cesme, on the other hand, traditionally hosts fewer foreign travelers than Antalya or Bodrum, though it has set its sights on Russian tourists and European sailors in the past decade. The prized location for Turks’ secondary homes, fancy beach clubs and surfing centers, its population hits 1 million in summer from a mere 45,000 in winter. However, its ambitions took an unexpected additional blow earlier this month with the highly publicized case of Ukrainian model Daria Kyryliuk, who complained that she had been beaten by the bodyguards of a posh beach club. The beach club denied this fervently, saying that Kyryliuk, who was in Cesme to promote a five-star hotel, had in fact been brutalized by her boyfriend. The negative publicity came at a critical time when Ankara is mulling whether to withdraw from the Istanbul Convention, a key international accord to combat domestic violence, leading the tourism minister to assure that Turkey would not tolerate aggressors. The club was closed down for 15 days for not adhering to COVID-19 measures and Izmir’s security chief spent the weekend touring touristic areas to slap similar penalties.

“The hotels and restaurants in Cesme mostly observe the healthy tourism measures imposed by the government,” said Ige Pırnar, professor at Izmir’s Yasar University who specializes in tourism management. “The problem lies with the beaches and other small enterprises that are a law unto themselves.” 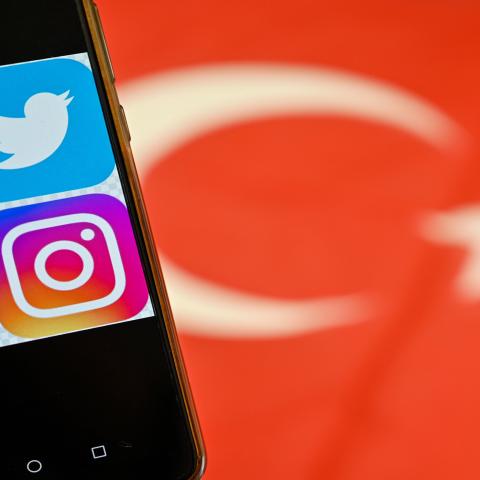