Despite the coronavirus crisis and the annexation plan, agreements to export Israeli natural gas to Egypt remain intact. 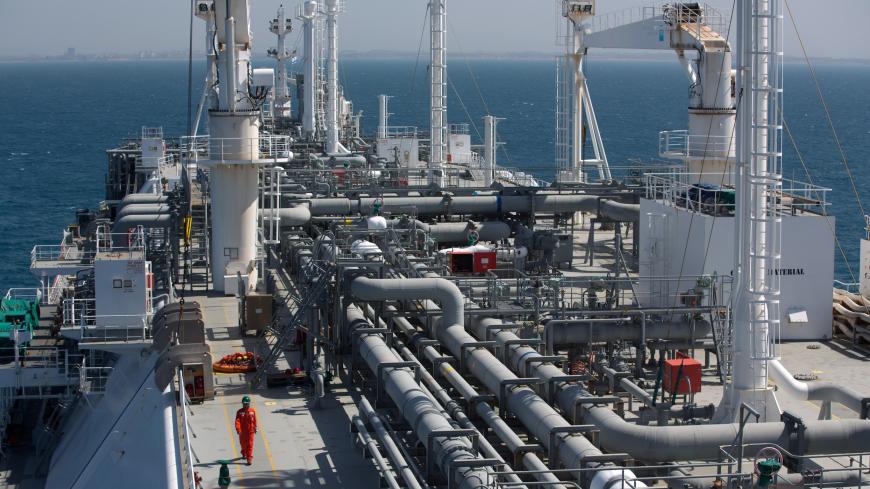 An employee walks on the Expedient regasification ship, anchored off the coast of Israel in the Mediterranean Sea on Feb. 26, 2015 - MENAHEM KAHANA/AFP via Getty Images

It could have happened because of the coronavirus pandemic, or perhaps because of Prime Minister Benjamin Netanyahu's plan to annex West Bank settlements. Regardless of the reason, observers anticipated that economic relations between Israel and Egypt and various other Arab states would begin to suffer and that this would impact natural gas exports.

At this stage, however, economic ties between Israel and Egypt have not suffered in the least, and agreements to export Israeli gas to be liquefied in Egyptian facilities are being implemented fully.

The first agreement to sell Israeli gas to Egypt was signed two years ago. The signatories were the gas partnerships in the Leviathan and Tamar fields, Israel’s two biggest fields, right off the coast, and the Egyptian Dolphinus consortium. The total value of the agreement was $15 billion over 10 years. An agreement signed in October 2019 increased the supply of gas to $20 billion, for a period of 15 years.

Gas began to flow to Egypt in January of this year through a pipeline that begins in the southern town of Ashkelon. In June, Nobel Energy, which is part owner of the Tamar and Leviathan gas fields, upgraded the pipeline connecting Israel to Egypt. This increased the export potential to Egyptian industrial concerns to 4.5 billion cubic meters.

By increasing the supply of gas to Egypt, the Israeli government also increased its income from its gas deals, whether through the taxation of profits or through the government-owned Israel Natural Gas Lines Ltd., which is responsible for the gas pipeline. In total, this amounts to hundreds of millions of shekels per year. As aforementioned, the flow of gas through the pipeline began at the start of this year. It was accompanied by a formal statement by Israel’s Minister of Energy Yuval Steinitz and Egypt’s Minister of Petroleum and Mineral Resources Tarek El-Mollah, which read, “This is an important development, which will serve the economic interests of both parties.”

In an interview with Al-Watan newspaper, Mollah said that before the revolution, his country already had an agreement to export gas to Israel, but the agreement was repealed as a result of the change in government. He explained that the main purpose behind the import of Israeli gas is to set Egyptian infrastructures into motion and export the gas overseas. He said Egypt could use Israeli gas for private consumption if needed since it falls within the strategic parameters of the Middle East Gas Forum.

At a meeting of the Knesset’s Energy Committee on June 30, Steinitz said the direct income from the Tamar gas field since it first began production has been around 12 billion shekels. He said this would increase significantly within two years, mainly due to the rate of gas being supplied to Jordan and Egypt. Steinitz also told the committee that overall relations with the two countries are solid.

On the other hand, a position paper produced by the nonprofit economic watchdog group Lobby 99 warned that the current contracts are sufficiently malleable to allow for a reduction of the amount in response to new circumstances. The group warned that such circumstances could include internal criticism within Arab states of gas purchases from Israel in reaction to the possible annexation of the territories.

The Jordanian parliament has already voted on more than one occasion to repeal the agreement to purchase gas from Israel. In fact, the most recent of these votes took place last January. On the other hand, Jordan has a major economic interest in acquiring cheap gas from Israel. In 2014, before the agreement was signed, then-Jordanian Energy Minister Mohammad Hamed said the acquisition of natural gas from Nobel Energy does not constitute a political danger to Jordan, nor will it make it subject to the whims of another country. On the other hand, the deal would save Jordan $1.5 billion per year. According to the deal signed in 2016, gas produced by Nobel Energy at the Leviathan gas field was sold to the Jordanian electric company for less than it was sold to Israel’s own electric company.

During the discussion about the topic in the Knesset committee, Steinitz recalled how, in the 1970s and 1980s, Arab petroleum-producing countries used oil to pressure the United States and Israel to apply diplomatic pressure on Israel. Now the situation is the reverse. “The Arabs once exported energy, and we suffered for it. Now, that has all been turned on its head.”

Steinitz also brought up another huge project, the EastMed Pipeline with Greece and Cyprus, which would be used to export Israeli gas to Europe. Egypt is now expected to join that initiative as well.

The initiative for this project, which Israel describes as strategic, was first advanced in the mid-2010s when it was learned that the gas reserves in the eastern Mediterranean basin were larger than anticipated. The original plan was to link Israel, Cyprus, Greece and Italy by way of a 2,000-kilometer pipeline running through the Mediterranean. After the signing of a memorandum of understanding between the countries at the start of the year, Greek firm Energean rushed to sign an advance agreement to sell the gas it imports via the pipeline. Furthermore, the European Union announced it would invest tens of millions of euros to investigate the feasibility of laying such a pipeline, so Israel now believes it will be the main partner in its construction. The reason for Europe’s interest in this is to reduce its dependence on gas imports from Russia.

With the signing of the memorandum, Prime Minister Benjamin Netanyahu announced that Israel was quickly becoming an energy power and energy exporter. He then called on Egypt and other Arab states to join the agreement. Egypt considers the proposal to be entirely reasonable, given the discovery of its own enormous gas fields in the eastern Mediterranean.

The importance that Egypt places on natural gas is also evidenced in its decision to expand its navy to defend its own gas fields and pipelines. Journalist George Mikhail wrote in Al-Monitor that Egypt is moving ahead with huge deals to purchase advanced weaponry to strengthen its navy. Israel believes one reason for this is the perceived notion that it will need to defend its gas exports, whether by tanker, as happens now, or pipeline, and whether it is the Israeli EastMed pipeline or a separate Egyptian pipeline, which will connect to it.

What concerns Egypt most is its major rival, Turkey. An Israeli security source speaking on condition of anonymity told Al-Monitor opinions in Israel are divided over how to react to the expansion of Egypt’s navy and its military in general. There is the very tangible concern that if the Egyptian army gets “too strong,” it could be used by an Egyptian leader less friendly to Israel than Egyptian President Abdel Fattah al-Sisi. This was the basis of criticism leveled at Netanyahu who, according to reports, agreed to Germany’s sale of advanced submarines to Egypt. On the other side of the debate is the position that the peace treaty with Egypt is stronger than ever and that, even if there is an attempt to replace the current government, it would fail, as happened with President Mohammed Morsi and his Muslim Brotherhood government. “Egypt has too much to lose. The Middle East has undergone major changes. It is hard to imagine how it would be possible to turn those changes back,” said the security source.