On the backdrop of the deepening economic crisis and loss of popularity, Prime Minister Benjamin Netanyahu abandons his free market vision in favor of handouts to all Israeli citizens. 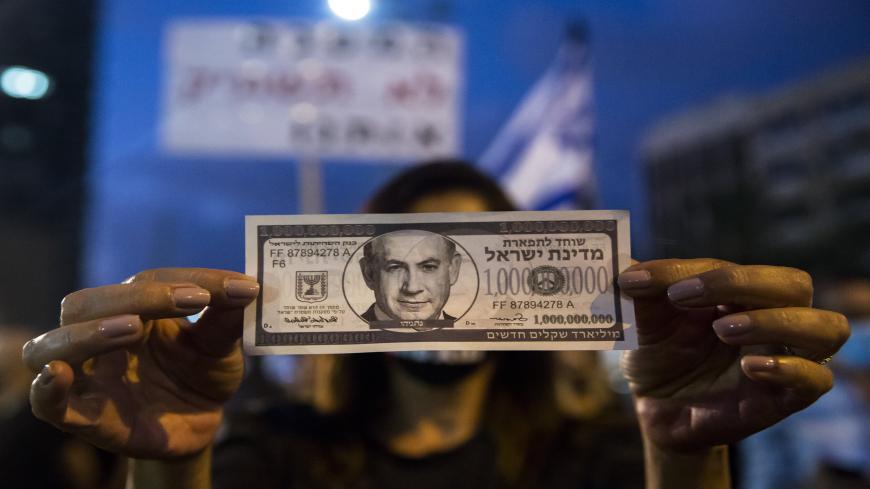 An Israeli protester holds a fake bill with a photo of Prime Minister Benjamin Netanyahu as she protests against the government's economic response to the corornavirus crisis, Tel Aviv, Israel, July 11, 2020. in Tel Aviv, Israel. Following a rise in the cases of COVID-19, Israeli Prime Minister Benjamin Netanyahu has ordered many businesses to shut, causing people to protest about a perceived mishandling of the coronavirus pandemic and to call for the compensation promised by the government to be paid out more quickly. (Photo by Amir Levy/Getty Images) - Amir Levy/Getty Images

Starting Aug. 2, almost every Israeli will receive a “coronavirus grant” deposited directly into his or her bank account in several installments. The subsidies, conceived by Prime Minister Benjamin Netanyahu in complete contradiction to the position of the Finance Ministry and to his own economic worldview, are supposed to boost consumption by those affected by the coronavirus crisis and catalyze economic recovery.

As usual, Netanyahu announced the measure in typical pompous style at a televised news conference he convened on July 15, incurring harsh criticism from almost every direction. Senior Finance Ministry officials reportedly tried to block the move, with arguments escalating to a real clash, according to some media leaks.

Critics argued that an expenditure of 6 billion Israeli shekels ($1.76 billion) was irresponsible populism at the height of an unprecedented economic and budgetary crisis, but Netanyahu was more concerned about the growing protests against his handling of the crisis, even among his Likud voters. Critics pointed to the fact that grants as high as 3,000 shekels ($880) per family would be handed out to everyone, even those unaffected by the economic downturn and even billionaires, such as Shari Arison, rather than being used for more urgent needs, such as bolstering the health services or expanding aid to the self-employed and small businesses.

Just hours after the grandiose announcement, private and media initiatives emerged to divert the grants from those who did not really need the money to those who did. Israelis pledged to donate tens of millions of shekels in grant money to the needy. Social media and WhatsApp groups were flooded with proposals for a “just” distribution of the money, and directors of high-tech firms urged their employees to donate all the state money they receive. In fact, a large swathe of the public sensed discomfort with the idea and many expressed mistrust of Netanyahu’s move despite its alleged goal of benefitting them.

The public arguments intensified in the ensuing days, but Netanyahu refused to back off the idea. Instead, he instructed that additional allocations be provided for the plan, initially for those receiving income support from the state, and then, under pressure from his ultra-Orthodox government partners, for large families. The blueprint he originally presented capped the grant sum at three children per family, but the ultra-Orthodox parties identified an opportunity to benefit their voters who generally have more than three children. “Even the seventh child in a family is hungry and he, too, should get lunch,” thundered the veteran head of the Knesset Finance Committee — ultra-Orthodox Moshe Gafni — during a July 29 stormy plenum session. The pressure worked. Netanyahu, who cannot rule without the support of the ultra-Orthodox, caved in and added 500,000 shekels ($147,000) to the pot.

The issue created an interesting alliance between the ultra-Orthodox and the Knesset members representing Israel’s 21% Arab minority, whose constituents also include large families. Even Netanyahu’s nemesis, the left-wing Meretz party, supported the plan as dovetailing with its quasi-socialist economic platform.

The Knesset approved the funding on the evening of July 29, and the money that will start flowing on Aug. 2 will be added to the funds already being provided at an accelerated pace in the past two weeks to eligible recipients hard hit by the crisis. At Netanyahu’s instructions, an unprecedented decision was also made to extend unemployment benefits to one year — the current cap is set at six months — as well as the aid to the self-employed and other affected firms.

These urgent measures by Netanyahu and his Finance Minister Israel Katz are meant to provide a measure of certainty for over 1 million Israelis hard hit by the crisis. However, Netanyahu critics, among them senior economists, argue that the measures would increase unemployment by providing a disincentive to return to work even once jobs are available. They also argue that the massive aid outflows are deepening the budgetary shortfall for which Israel will be paying for decades at the expense of future generations.

Increasingly, Netanyahu’s actions completely defy his economic doctrine. In 2003, he served as finance minister during one of the state’s harshest economic crises generated by a combination of the second intifada and the global dot.com collapse. The resulting economic instability even raised concerns of a bank collapse. Netanyahu was quick to act, seeing the crisis as an opportunity to make his neo-liberal mark on the socialist-oriented economy that he held in such contempt. The 172-section recovery program, anchored in special legislation approved by the Knesset in May 2003, bore the unmistakable fingerprints of Netanyahu’s market economy approach. For disadvantaged Israelis, it was bad news. The social benefits they had enjoyed, including child supports and unemployment stipends, were slashed, with Netanyahu arguing that the move would encourage people to work and increase productivity.

His 2½-year tenure as finance minister is attributed with generating a structural economic revolution in the spirit of deregulating capital markets, lowering trade barriers and reducing state involvement in the economy, especially through privatization, reflecting the views he had formed over the years. From the contempt for “socialism” and left-wing Bolshevik politics that his father instilled in him, through his education in the United States and business management studies there, and his experience working at the Boston Consulting Group in his mid-20s. The Netanyahu of summer 2020, who worshipped for five decades at free market temples, is shifting direction, steering the economic ship of state toward the system that he had held in contempt his entire adult life.

One can debate the effectiveness of his moves, or even consider that he may have seen the error of his previous capitalist ways, but the troubling element is the speed with which he adopted these measures under pressure of declining ratings. They seem to lack cohesion, even as the government has yet to present its 2020 budget for Knesset approval due to Netanyahu’s politically motivated insistence on approving a one-year budget rather than a two-year one.

On July 29, 15 top economists, professors and former central bank governors wrote a harsh letter objecting to Netanyahu’s insistence on what amounts to a three-month budget, arguing that it would simply deepen public uncertainty. “World markets will not understand such a move, which would create the impression that Israel lacks a budgetary framework and had lost direction,” they stated.

Taken together, these developments all cast into doubt the past decade of economic stability of which Netanyahu is so very proud.