Thousands of Israelis hit the streets over the the weekend in protest of the government’s failure to effectively and quickly address the economic crisis induced by the coronavirus. 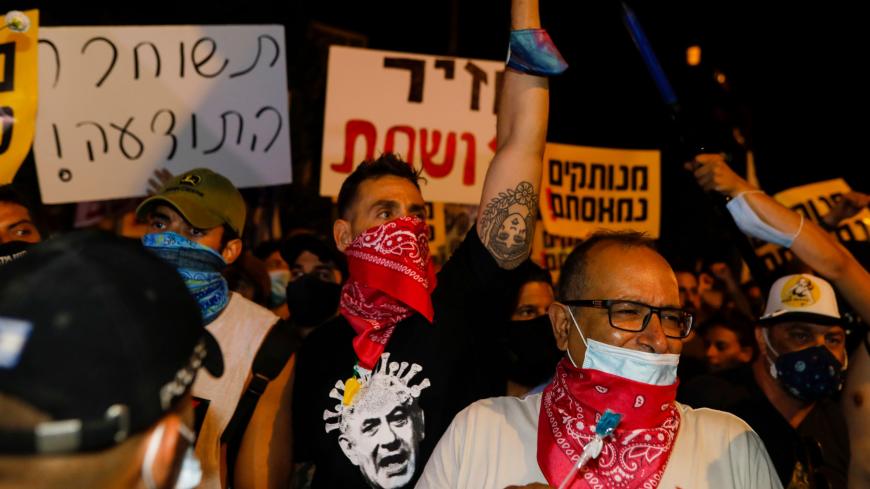 The huge protests breaking out all across Israel do not bode well for Prime Minister Benjamin Netanyahu. The same thing happened nine years ago, in the summer of 2011, with the social justice movement. Back then, Netanyahu failed to foresee the enormous wave of protests that swept across the country.

Inspired by the Arab Spring, hundreds of thousands of Israelis took to the streets in 2011 to protest the high cost of living, the real estate bubble and the collapse of the middle class, believed to have been brought about in large part by excessive taxes and interest fees. At the height of the demonstrations, a million Israelis were in the streets protesting.

It all happened at the start of Netanyahu’s second term. Sensing the precariousness of his position, the prime minister promised to fix the country’s deep social and economic disparities. He went on to form a number of committees to investigate the problems being raised and even implemented some of their suggestions. In the end, he survived the crisis.

Thus it seemed like deja vu when large numbers of desperate, angry Israelis took to the streets the night of July 11. Those protesting were largely made up of the self-employed and unemployed who have been struggling to make a living since the coronavirus crisis began four months ago. They have used up their savings, and their business are paralyzed and collapsing; the government, rather than extend a hand to pull them out of the mire, instead just let them sink.

About 10,000 people participated the largest protest, in Rabin Square in Tel Aviv. Nevertheless, it was obvious to everyone that many thousands more would have come were it not for social distancing guidelines to prevent the virus’ spread. While these demonstrators protested in Tel Aviv, many more gathered on bridges across the country to vent their outrage at the government. They did this even though it meant leaving the safety of their homes and family at the peak of the pandemic’s “second wave.”

A long line of victims of the economic pandemic waited to address the crowds in Tel Aviv. They all led creative lives as recently as a few months ago. Many of them owned successful businesses. Now they have no idea how they will pay next month’s rent.

One of these speakers was Chaim Hirschberg, an owner of the Mondo 2000 club in Tel Aviv. He spoke about how helpless he felt: “I opened my business two years ago, with the goal of creating jobs for dozens of people, while highlighting how wonderful Israeli nightlife is. It is what brings people back to the country year after year. My partners and I are now facing a very difficult decision. Should we shut down a business after working so hard to get it off the ground, when it means giving up on our dream? We followed the government’s instruction all throughout the crisis. I pay property tax, rent and taxes. We are now witnessing the most bloated government of all times standing silent while so many of us are suffocating. Where did you go, now that you’ve shut down our lives?”

In hindsight, the problems that led to the 2011 protests seem like an afternoon stroll in the park when compared with the serious economic problems facing hundreds of thousands of Israelis. Back then, unemployment stood at 5%, and people could still pay rent and buy food. Today, unemployment hovers around 20%. This puts the COVID-19 protests in a league of their own.

Efforts by a few members of the Likud to argue that this was actually a demonstration by leftists opposed to Netanyahu not only failed to help the prime minister, but appeared to actually swell the ranks of people opposed to his rule.

The negative impact of the “economic coronavirus” is not limited to supporters of the left. It has struck everyone, with an emphasis on the middle class. Among the people affected are countless Netanyahu supporters. This is not some temporary crisis, either. It is an economic megacrisis of historic proportions. Even when it is finally over, it will take years for Israel to dig itself out.

The overall impression is that Netanyahu only realized the scope of the outrage sometime last week, when the second wave of the coronavirus hit Israel. Once again, the government was forced to announce that businesses such as event halls and gyms would have to shut down. Until then, many people believed that once they were able to go back to work, they would be able to rebuild their businesses. That turned out to be a pipe dream. It was also when the self-employed began planning their demonstration for July 11.

On the evening of July 8, Netanyahu held an urgent press conference with Finance Minister Israel Katz to present their plan to offer emergency aid to the self-employed and the unemployed. This includes immediate grants of up to 7,500 shekels [$2,200] to the self-employed, and eligibility for additional grants lasting up to June 2021. It also involves a comprehensive extension of unemployment payments for hundreds of thousands of Israelis, as well as providing assistance in obtaining business loans.

In an attempt to lower the flames and reduce tensions, Netanyahu and Katz met July 10 with representatives of the self-employed. At this meeting, which lasted almost until the Sabbath [Friday evening], they listened to the problems and reservations that the self-employed had with the emergency plan. Netanyahu may have thought that this would be enough to cancel the demonstration the next day or at least reduce the number of participants, but he was proven wrong.

It turned out to be the largest protest since the start of the pandemic. What set it apart was the overwhelming sense of desperation and sadness, rather than outrage. On July 12, the government approved its aid package, but as time goes by, more and more holes have been found in it. Many of the self-employed — the main victims of this crisis — will end up receiving very small grants, often amounting to no more than a few hundred shekels. Netanyahu and Katz have already promised to be more attentive to these problems and to fix them once the plan is implemented, but it is not at all certain that they will be able to stop the wave of protests planned this week — including one outside the prime minister's official residence in Jerusalem on July 14.

On July 14, Israelis awakened to chilling news on the coronavirus front —1,681 new cases registered the day before. Also, the number of seriously ill patients and patients on ventilators is rising, the Health Ministry failed to take advantage of a lull to prepare for the second wave and no one has yet been named coronavirus affairs director to coordinate the nation's response to the crisis, as new Health Minister Yuli Edelstein promised. On the economic front, there is a growing feeling of distrust in the current “coronavirus government” and the person at its helm. Not only is the largest government in Israel’s history costing taxpayers a fortune, it is not serving the people’s interests, either. There is good reason why Netanyahu is taking a dive in all the polls and even losing the trust of voters on the right.

The mood set by the protests is even spreading among Netanyahu’s allies in the ultra-Orthodox community, who claim that the authorities have it out for them. They complain that the government has been acting too impulsively to impose closures on ultra-Orthodox neighborhoods and to enforce the use of masks. To express their rage, hundreds of ultra-Orthodox protesters gathered in Jerusalem’s Romema neighborhood July 13 and threw eggs at the police.

At first glance, these ultra-Orthodox protesters have nothing in common with the self-employed in Tel Aviv, demonstrators on the bridges and people protesting Netanyahu’s corruption. They come from very different cultural and political backgrounds. But there are some things that they have in common, among them a sense of helplessness, anger and a loss of trust in the current government.