Celebrity chefs are championing the fight against the government’s decision to close down restaurants over the coronavirus pandemic. 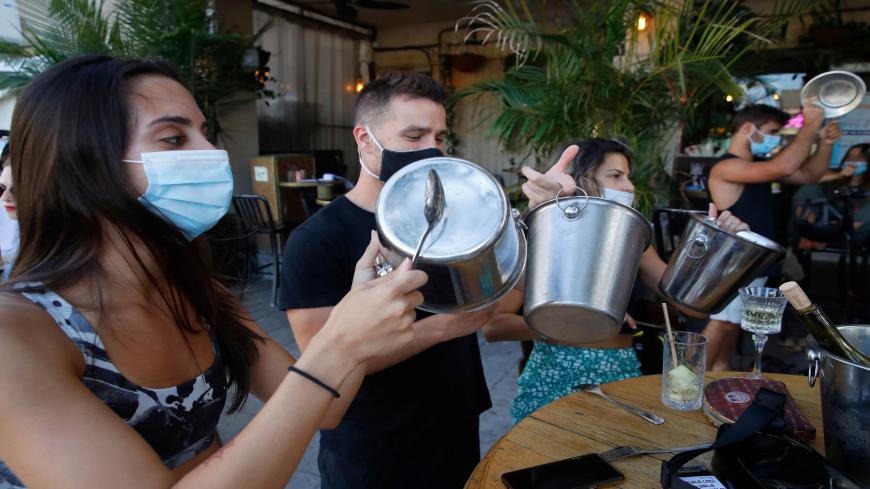 Mask-clad Israeli restaurant owners and patrons protest against new lockdown measures imposed by the authorities due to a surge in coronavirus cases, by banging ice buckets, in the coastal city of Tel Aviv, Israel, July 17, 2020. - JACK GUEZ/AFP via Getty Images

It all began on the afternoon of July 17. A group of Israel’s leading chefs forced the government to overturn a decision it had made just a few hours earlier to close all restaurants in an effort to respond to a spike in the spread of the coronavirus.

The original decision was infuriating to these restauranteurs. Their refrigerators were filled with expensive foodstuffs, purchased in preparation for the weekend. With the realization that the food would now go to waste was one step too far for a sector that suffered one of the worst blows since the coronavirus pandemic started in March. For months, these restaurants, bars and cafes were forced to shutter their doors without any adequate compensation for their losses. Many of these businesses shut down entirely. Others are now teetering on bankruptcy. Even the country’s finest chefs are trapped in the uncertainty of this miserable new reality.

This time, however, their response was different. Posts and video clips started popping up on social networks, announcing that restaurants have no plans to follow the government’s overbearing instructions. Others started taking food out of their refrigerators and donating it to the needy. These protests were then documented on social media — the restauranteurs were desperate.

While all of this was going on, restauranteurs sent angry messages to the government, some of them through ministers, who actually requested an extension, in order to avoid the immediate financial damages they would suffer from another weekend with no business. After all, they had already spent tens of thousands of shekels from their own pockets to fill their pantries and refrigerators.

They argued that the decision to close restaurants was made at random, not backed by official data. In fact, they claimed, there was no evidence that infection rates in restaurants were inordinately high. According to Shai Berman, general manager of the Restaurants and Bars Association, only 21 documented cases of infections occurred in restaurants in the last 40 days, and only six in bars.

But what really propelled this struggle to national attention was the fight put up by celebrity chefs, many of whom have their own TV cooking shows. They seized the reins of the restauranteur revolt. The most effective of these was Ruti Broudo, owner of a successful chain of restaurants in Tel Aviv and star of a popular Channel 12 cooking show. Broudo announced that she planned to violate the order by keeping her restaurants open; she would not be throwing food into the trash. Her message spread like mushrooms after a spring rain. More and more restauranteurs started saying the same thing.

Asaf Liss, co-owner of Tel Aviv’s successful Mashya restaurant, told his clients that his restaurant would also remain open. In an interview with the media he said, “We will not allow ourselves to be brought down by a random decision made in the darkness of night. We bought tens of thousands of shekels worth of food, and we don’t intend to throw it away. We don’t think it is right to throw food out. We certainly do not accept a ridiculous decision made via TV screens in the middle of the night.”

A more conciliatory tone was taken by Haim Cohen, one of Israel’s most popular chefs and a TV star in his own right, who is also considered a popular folk star. While Cohen did not really seem to support the call for “civil disobedience,” he did issue an emotional appeal, calling on Netanyahu to reconsider his decision.

Cohen wrote, “We are law-abiding citizens who love our country and take pride in it. The decision to shut us down almost immediately — on the weekend when our refrigerators are full of supplies that will end up being thrown out — is causing people to break the law. Please, sir, consider holding off on this decision until next week. Give us at least the little oxygen we need, and let us breathe this weekend, without causing tens of thousands of shekels in damages. You have the power to prevent unnecessary anarchy. We need your leadership now!”

The message spread like wildfire. The spirit of rebellion quickly made the transition from social networks to the media, including news sites and TV news shows. It connected with overall public outrage over the government’s failed handling of the financial side of the coronavirus pandemic. And while all of this was going on, preparations continued for the mass demonstrations of the self-employed, planned for several spots across the country on July 18.

This time, the pressure worked. Negotiations between representatives of the Restaurants and Bars Association and Netanyahu’s office ended with the government folding. Suddenly, the government announced that restaurants would, in fact, be allowed to remain open until July 21.

The incident was yet another negative milestone in the precipitous drop in public trust toward the government’s management of the coronavirus crisis. It proves that decisions with dramatic implications on people’s lives and businesses are being made on the go, with no consideration of the public will.

Netanyahu was worried that powerful restauranteurs with close connections to the media and the public would fan the flames of discontent in the street. With more demonstrations planned for the weekend, he decided to retreat, despite the damage that it caused to himself and the coronavirus government he heads.

During the first wave of the coronavirus outbreak, Israelis followed government orders to shut down the country’s economy at once. The public's response has been very different during the second wave of the virus spread, which has been hitting Israel for the past two weeks. People are tired, while businesses are dealing with an uncertain economic future and the sense that the decision-makers are completely detached from reality.

Thanks to their success, restauranteurs have started to cooperate more closely. They have even established a combative steering committee to negotiate with the government, but also with the Knesset members on the Coronavirus Committee, which oversees the government's decisions on the matter. And this comes in addition to the public struggle that they are waging.

The success of the restauranteurs has also encouraged other sectors to take action against the government. Many have begun to organize, including older groups, which once wielded much more power in the local economy. One example of this is the Nurses Union. Realizing that the government is losing public support, it decided to take advantage of the momentum by taking a more confrontational approach. On July 19, nurses announced that they would stop providing all but emergency services. One day later, after expedited negotiations with the finance minister, they received thousands of new positions, and the strike was halted. Parents’ groups were also successful in overturning the government’s decision to shut down schools this summer. Once again, the government folded.

These events should serve as a warning signal to the country’s decision-makers. While efforts to organize a tax revolt have yet to gather momentum, in the current, chaotic situation even that could happen.