Years of exclusion from the social and political arenas might explain the fact that almost no Arab citizens have been seen taking to the streets to protest this government and its prime minister. 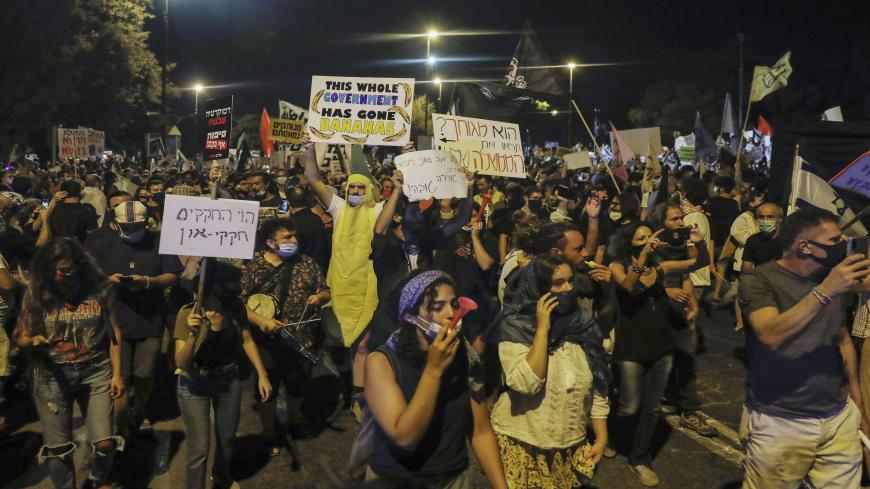 The coronavirus is taking its toll in Israel. The past few weeks have seen the country rocked with all sorts of protests over the dire economic situation that the virus has caused. Protesters, who cross sociopolitical lines, are accusing Prime Minister Benjamin Netanyahu of mishandling the crisis. Israelis of all stripes have been participating in Black Flag protests, as well as more particular protests by Israeli artists, social workers, the self-employed, and others.

The one group that is conspicuously absent from this festival of democracy is the Arab public. And it’s not because they would have to make the trek to far-off Tel Aviv or Jerusalem either. Anyone watching these protests will notice that they even avoid the Black Flag protests on Saturdays, although many of these take place at intersections not far from major Arab towns or villages. In other words, they are literally right across the street.

For years, Israel’s Arab citizens made a point of protesting only when the matter at hand constituted a direct attack on the community or its interests. That is what happened during the protests against the 2018 Nationality Law , which anchors the Jewish nature of the State of Israel, or last year’s protests against rising violence in Arab society. Once the protests involve all Israelis, however, there is almost no Arab representation.

The most prominent example of this are the current protests by Israeli artists and the self-employed. Among those attending were Israelis affected by the closure of event halls, clubs, and anything else connected to leisure and entertainment activities. As we have seen in an earlier Al-Monitor article, the coronavirus-induced economic crisis has also had an enormous impact on Arab artists and the self-employed, particularly because weddings and other events have been canceled. Nevertheless, Israeli Arabs have neither participated in existing protests nor organized independently to protest the situation.

That all changed this week, when singer Esam Kadri organized a protest July 20 with several other Arab artists at the Ahihud Junction in the north. Only a small number of artists participated — far fewer than the organizers had hoped to see there. Still, it was a first, baby step among the Arab public in response to the pandemic.

Is this the first sign of a coming “Arab Spring”? In a conversation with Al-Monitor, Kadri said, “As a result of the situation we have reached as artists, I decided together with a few of my colleagues to initiate something and announced a protest on behalf of the artists at the Ahihud Junction. Sadly, only about 25-30 artists actually showed up. I have no doubt that this dearth of participants was the result of internal clashes of ego between the various artists. In the future, we plan to announce the formation of an Association of Arab Artists to represent us, with a chairperson who is not from the arts.”

While the burning issue and the most sensitive point that Kadri brought up was the failure of the Arab public to flock to the various protests across the country, the reason for this is somewhat complicated. To get to the crux of the matter, the problem needs to be assessed from several different angles. First of all, there can be no doubt that many of the demonstrations are overtly political. This is inevitable given the fact that the participants are protesting Netanyahu because he is prime minister. In fact, this could have a direct connection with the failure of the Arab public to participate.

For several years, the Jewish center-left in the country — with the possible exception of Meretz — has concluded that the best way to come to power is by disassociating itself from the Arab community — an approach, it should be noted, that hasn’t been successful. For that reason, the presence of Arabs was kept low-key — Arab associations were not invited to take part in the organization of demonstrations — so as not to give Netanyahu a chance to brand the protesters as “collaborators with the Arabs,” and redirect attention away from the protests’ legitimate economic grievances. Furthermore, the Arab public feels that it is not wanted at these protests or even in the political game at large. It could be a combination of these two elements that led to a situation in which almost no Arab citizens have been seen taking to the streets to protest this government and its prime minister.

In a conversation with Al-Monitor, Jamal Majadle, a social activist from Baqa al-Gharbiyye, said, “It is the direct consequence of the exclusion of the Arab public — which happens so often — and the refusal to accept Arab citizens as part of the ultimate sovereign authority in the public space. As a result, Arabs prefer to step back, rather than being part of the struggle."

Given these circumstances, maybe it is time for both sides — Jews and Arabs — to take a whole different approach and finally realize that they have no alternative but cooperation if they are to achieve the protests’ objective and improve their economic situation. The question that must then be asked is, how do they do that?

Coexistence activist Elad Peleg of Kibbutz Magal, who is involved with the Black Flag protests, told Al-Monitor, “I think that anyone for whom this country is important must play an active part in the protests and demonstrations against corruption and for democracy. I would expect the participation of and partnership with the Arab community.” When asked why Arabs can’t be found at the protests, he said, “Unfortunately, it seems as if the Arab population doesn’t believe that it can influence and change the situation.”