In the spirit of the wave of social justice demonstrations in 2011, Israelis in desperate economic situations due to the coronavirus outbreak are taking to the streets of Tel Aviv. 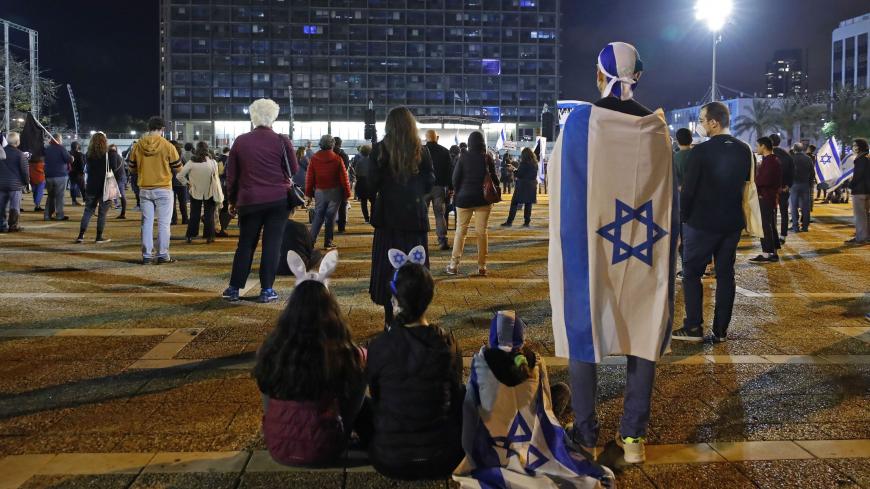 Israelis take part in a demonstration in Rabin Square to protest what they consider to be threats to Israeli democracy, against the backdrop of negotiations between Prime Minister Benjamin Netanyahu and his ex-rival Benny Gantz, Tel Aviv, April 25, 2020. - JACK GUEZ/AFP via Getty Images

The social protests that rocked Israel in the summer of 2011 were one of the worst nightmares that Prime Minister Benjamin Netanyahu had in all his years in office. Now it looks like the protests are back and possibly bigger than ever.

The earlier protests began with a single tent set up on Rothschild Boulevard in Tel Aviv after the country managed to get through the global economic crisis that began in 2008 with minimal damage. Nevertheless, the protesters, mostly from the middle class, were unwilling to accept the preferential treatment that they believed a small group of “tycoons” had received from the government. They were angry that these individuals had grown rich through privatization and upset at the government’s failure to rein in the monopolies they had created, which had made Israel one of the most expensive countries to live in.

The protests emerged as part of the global phenomenon that included Occupy Wall Street in the United States. The founding of the centrist Yesh Atid was one of the political byproducts of the movement. Although the party spent two years in a Netanyahu coalition, in 2015 it became the most vociferous opponent of his governments. A tent protest reappeared April 25, again on Rothschild Boulevard, with the protester’s main gripe being their economic abandonment by the government.

Before Covid-19 began ravaging the global economy, Israel’s economic situation was considered good by international economic standards: unemployment was low, at 4-5%; the average wage had been rising steadily; the gap between rich and poor was shrinking; and credit was relatively cheap. Then the coronavirus reshuffled the deck. Within a month, the unemployment rate shot up to 27%, with 1,125,000 people out of work. The majority of the newly unemployed are actually salaried employees on unpaid leave, meaning that many of them could return to work once the crisis passes. On the other hand, the crisis means that they have no source of income apart from unemployment payments, which are no more than 70% of their regular salaries.

The situation is even worse for independent contractors. Since most of them are ineligible to receive unemployment payments, the government has been trying to provide them with small survival grants of no more than NIS 16,500 ($4,600) as well as low-interest loans. The independent contractors and the organizations representing them have taken their demonstrations to the Prime Minister’s Office. Other protesters include people who work in culture and the arts, including actors, directors, singers, musicians and their crews, numbering some 150,000 people. Almost all of them are now unemployed. They have been demonstrating in Rabin Square in Tel Aviv.

The fruit and vegetable markets are among the branches of the economy suffering the most from the crisis. The problem is that while supermarkets large and small remain operational, open-air markets have all been closed. Merchants in Jerusalem’s Mahaneh Yehudah market have a reputation of being among the most avid supporters of Netanyahu and the Likud, but they are now protesting against the government’s decision to keep their enterprises shuttered. Tali Friedman, chair of the Committee of Market Merchants, pleaded with the prime minister to allow the markets to open, arguing that it made no sense to allow regular shops to remain open across the country, while keeping open-air markets shut down. According to her, the merchants are in a state of pure desperation.

Just a few hours after the merchants held a protest, one of the market’s most established vendors took his own life as a result of his dire financial situation. Jerusalem Mayor Moshe Lion, a former general manager of the Prime Minister’s Office under Netanyahu, responded, “I am shocked and pained by the sad news from the Mahaneh Yehudah market. A business owner, who could not withstand the economic tailspin, put an end to his life. I call on the government to open the market immediately. The livelihoods of thousands of families are at risk. Any delay could cost lives.”

Another event driving the demonstrations was the decision to allow several branches of IKEA to reopen although malls and other shops remained closed. According to rumors, the owners of IKEA Israel, Shalom Fisher and Matthew Bronfman, had in the past donated millions of shekels to the Gur Hassidic court, of which Health Minister Yaakov Litzman is a member. Litzman denied any personal involvement in IKEA's reopening, saying it was a professional decision made by senior ministry staff. The ministry’s director general, Moshe Bar-Simantov, later admitted that it had been a mistake.

The protesters on Rothschild Boulevard represent many different sectors of the economy. The one thing they have in common is that all of them have been hurt by the current economic situation. Among them is Costa Black, who worked as a restaurant manager in Eilat. “They shut down our businesses two months ago,” he told Al-Monitor. “I have no money for rent. I’m suffocating. Our livelihood is dead. I would never have believed that at thirty years old, I wouldn’t have any money to live on. I have no one who can help me, so I decided to say, ‘Enough!’ and take to the streets. I’ll live on the street, because I ran out of money.”

Then there is Yael, who owns a dance studio in Tel Aviv. “We have two children, and our studio has been shut since March 13,” she told Al-Monitor. “It costs us 20,000 shekels [$5,700] a month just to maintain it, and that is coming out of pocket. I really hope they give us a discount in the municipal tax we pay. There is just one reason for all of this, and that is the prime minister, who does not want to stand trial.”

The last part of Yael's statement illustrates that the motives for the protest are in part political. If the protests intensify, and members of other sectors of the economy join in, it could be very bad news for the prime minister.

Netanyahu has been busy trying to form a government, after reaching an agreement to do so with Blue and White chairman Benny Gantz. The new government is supposed to provide a response to the protesters and resolve the dire economic situation. A senior official at the Finance Ministry told Al-Monitor that one reason for only offering partial support to independent contractors is that they are waiting for the incoming finance minister to draft a policy. A second reason is Israel’s sizable budget deficit due to high expenditures and a decline in tax revenue. Moody’s downgraded Israel’s credit rating from positive to stable on April 24 because of the anticipated deficit and the political situation.

Nevertheless, it looks like Netanyahu will have a very hard time setting economic policy in the next government. His agreement with Blue and White requires that an economic “super cabinet” be formed and that all economic decisions be made jointly by the Likud and Blue and White. It also appears as if the minister of economic affairs will be Labor Party Chairman Amir Peretz, a social democrat opposed to Netanyahu’s liberal economic policies. As head of the Histadrut labor union in the 1990s, Peretz made Netanyahu’s life miserable. The two men clashed frequently, and Peretz even closed down the market with strikes on several occasions. Blue and White's Avi Nissenkorn, who has also headed the Histadrut and whose economic views run counter to those of Netanyahu, is to serve as a senior minister as well.

While dealing with Peretz and Nissenkorn, Netanyahu will have to face the protests by independent contractors, the unemployed and other workers demanding that the government help them through the coronavirus crisis. If a unity government is, in fact, sworn in, Netanyahu will have a year and a half as prime minister to fit this square peg into a round hole. Should he succeed, he will have justified his old moniker, “the Wizard.”