With an unprecedented economic crisis generated by the coronavirus pandemic, it is not at all sure whether Prime Minister Benjamin Netanyahu can regain public trust. 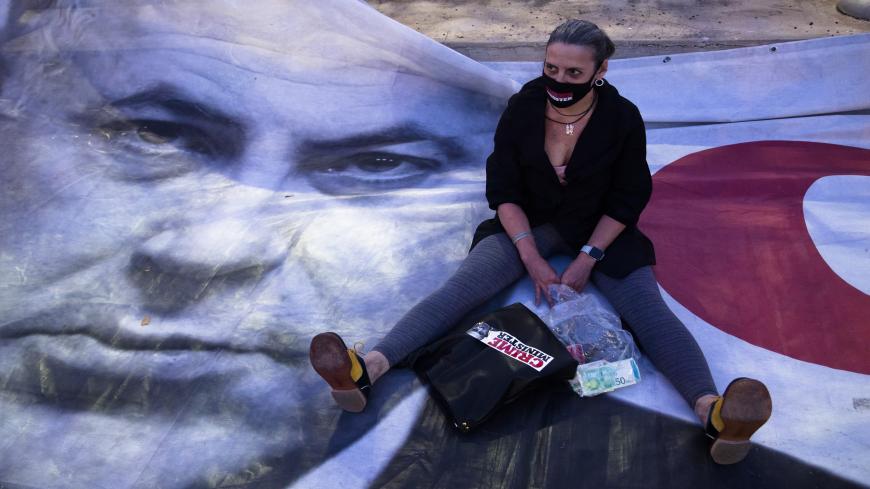 Over the past two weeks, the renowned luck that has paved Netanyahu’s way throughout most of his political career appears to have run out. The rabbits he used to pull out of his hat in times of trouble have fled. Israel has been plunged into a severe health crisis that has turned it almost overnight from one of the West’s most flourishing, stable economies into a lame and bleeding duck.

For the first time in a decade, Netanyahu’s approval ratings have plummeted within days. In May, 74% of Israelis described his handling of the coronavirus crisis as “good,” whereas only 23% said it was “bad.” In June, the gap shrank with 56% believing he was doing well and 36% disagreeing. In a July 6 poll, his performance index turned negative, with only 46% approving of the way he is tackling the resurging pandemic and 49% giving him a failing grade.

In terms of his handling of the pandemic’s economic repercussions, his plight is even worse, with 62% giving him a failing grade and only 33% approving of his performance. These results should be of particular concern to Netanyahu, always considered an economic wizard that earned him the sobriquet of “Mr. Economy.” Now, his Midas touch appears to have dissipated. With some 1 million Israelis, about 20% of the workforce, laid off or furloughed, and a virus that refuses to call it quits, Netanyahu looks like a flailing swimmer desperately trying to hold on to a straw to save himself from drowning.

Fortunately for him, an alternative candidate is nowhere on the horizon. In a brilliant strategic move in April, he neutralized the Blue and White party, the only credible alternative to his rule to emerge since he took power in 2009. His machinations split the party in two and eroded the popularity of the Blue and White leader, Defense Minister Benny Gantz, with the very voters who handed him a tie with Netanyahu in three consecutive elections and an average of 33 Knesset seats. Polls now give Gantz’s party barely 10 seats. While his former partner and current opposition nemesis, Yesh Atid party chair Yair Lapid, has recorded impressive gains in the polls — 16 Knesset seats — Gantz is nowhere near to constituting a threat to Netanyahu. The prime minister’s plummeting popularity notwithstanding, the Likud party under his leadership still musters an average of 36 seats in the polls, albeit less than the peak of 41 seats on June 17. These figures are not particularly consoling for Netanyahu, a skilled political creature always fearing the unknown and suspecting that his potential replacement is preparing somewhere for the right moment to pounce.

In a counter strike, the prime minister took to prime-time TV July 9, presenting the worried public with an emergency aid package to the tune of tens of billions of shekels to help Israelis weather the crisis. For the first time since the coronavirus outbreak, the government has plunged its hand deep into the state coffers, flinging money at the unemployed, self-employed and business owners in a bid to block the rising discontent and quell the growing social protests.

Netanyahu’s first test is set for the evening hours of July 11, with a massive anti-government demonstration planned in Tel Aviv’s main square. The last thing he wants to see there is a reenactment of the 2011 socio-economic protest that brought hundreds of thousands of Israelis into the streets to demonstrate against the collapse of the middle class, exorbitant housing and living costs and his government’s performance. Netanyahu weathered that crisis with relative ease, but that was in 2011 — before corona.

The events of the coronavirus crisis have led many Israelis to realize for the first time that the king they anointed has no clothes. Israel’s impressive achievement in quelling the outbreak in its initial weeks has been all but forgotten. Rather than preparing itself for an expected second wave, the government rested on its laurels. It now finds itself short of protective equipment for medical teams, unable to track properly and quickly those infected in order to isolate others with whom they may have come into contact, and crying out for centralized planning and management of the health crisis.

The relatively low mortality and infection rates of which Israel boasted at first are attributed mostly to its particularly young demographics, its geographic location (almost like an island) that enables sealing off its borders, and to Netanyahu’s good initial call in doing so almost at once. Since then, however, Netanyahu’s chaotic management has come to light, as have his inability to delegate and unwillingness to appoint a corona “czar,” so as not to share the credit and his refusal to hand over management of the crisis to the Ministry of Defense.

Israel has developed some of the world’s most sophisticated, skilled emergency response mechanisms, honed through decades of wars, but they have not come into play in the coronavirus crisis. Rather than activating its National Emergency Administration and the military’s Homefront Command, rather than handing the logistics management to the well-oiled army machinery, Netanyahu has been relying on old-fashioned Health Ministry officials with antiquated computer systems stranded somewhere in the previous century due to prolonged, deadly budget cuts. The results should come as no surprise. From its lauded performance that set an example for other nations, Israel has turned into a laughing stock. Only weeks ago, Netanyahu still boasted that world leaders were calling him to learn how Israel had done so well, whereas now, its fiasco is making headlines around the world.

And yet, Netanyahu is far from done. He is the most prematurely eulogized leader in the world, who generally rises up to deliver eulogies at his mourners’ funerals. He is still the sole master of the Israeli political arena. He is holding his previous rival, Blue and White, hostage in his government. Contrary to the terms of his power-sharing deal with Blue and White, Netanyahu plans to push through approval of a one-year budget (for the remainder of 2020) rather than a two-year budget as stipulated in the coalition agreement. Gantz has protested this violation, but has no ammunition, so it seems, with which to fight it.

The budget issue is the only loophole in the deal that tightly binds Netanyahu and Gantz. If the Knesset fails to approve the budget, Israelis go to the polls once again and Netanyahu remains premier in the interim. Gantz was counting on approval of a two-year budget that would render this loophole null and void — because the budget would be in force until he takes over from Netanyahu in November 2021. Gantz was wrong. Netanyahu will be able to send him home before the rotation deal if the Knesset fails to pass the 2021 budget.

Still, Gantz need not worry, for now. Netanyahu fears the unknown more than he fears Alternate Prime Minister Gantz. He fears that the crisis will give rise to a group of fresh faces, economists, effective executives and technocrats, perceived as devoid of a political bent and free of special interests’ pressure. People who could handle better the coronavirus crisis. If such new leaders emerge, Israel might face a new coronavirus-induced political bang. But until that happens, what was will be again, to quote the biblical sages.