2021 elections in Israel: The revival of Benny Gantz

Pre-election public opinion polls estimated that Blue and White under Defense Minister Benny Gantz would fail to pass the Knesset-entry threshold, but in reality the party has apparently garnered 8 Knesset seats. 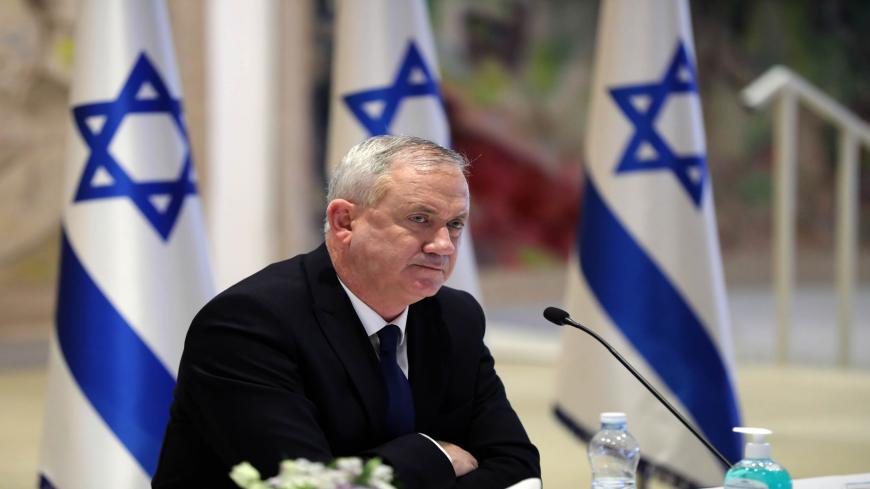 The relief on the face of Blue and White party leader and Defense Minister Benny Gantz was almost palatable as he entered a hotel conference center in suburban Tel Aviv on the evening of March 23 following a grueling, tense election day.

Although TV exit polls were giving Gantz’s centrist party seven to eight Knesset seats, just one year after it swept up the equivalent of 33 seats in Israel’s previous elections, he could not have hoped for a better result. “I was a fighter and I will continue to fight for Israeli society,” the former military leader pledged to the activists gathered in the hall. “Starting tomorrow, I will do everything to unite the bloc of change,” he said, referring to the group of parties dedicated to ousting Prime Minister Benjamin Netanyahu.

In the weeks prior to the March 23 vote, Gantz’s party faced a tangible threat of annihilation. Polls showed it teetering on the verge of the 3.25% electoral threshold, which risked keeping the party out of the Knesset and scuttling efforts by the political center-left to replace Netanyahu.

This projected scenario was at the center of a particularly vicious campaign mounted by the Yesh Atid party of Knesset member Yair Lapid, formerly Gantz’s partner in the Blue and White leadership. The two split in bitter acrimony after Gantz joined Netanyahu’s government last year. In recent weeks, Lapid had called on Gantz to bow out of the race given his party’s poor showing in the polls, hoping that his potential voters would switch their allegiance to Yesh Atid. Labor party Chair Merav Michaeli also urged Gantz to pull out and give the bloc a fighting chance against Netanyahu. Gantz, for his part, insisted on staying put and promised an election day surprise.

He was right. Not only did his party cross the four-seat threshold, its results were impressive considering the circumstances — 250,000 voters who handed it eight respectable Knesset representatives without whom the bloc would not have stood a chance of challenging Netanyahu.

Gantz has reinvented himself in recent weeks to such an extent that some are mentioning his name in private conversations as a compromise candidate for prime minister on behalf of the multi-party “bloc for change” (the anti-Netanyahu bloc). His easygoing personality and centrist views would make him the ultimate choice of the disparate, ego-driven contenders.

The quasi-religious term “resurrection” is appropriate to describe Gantz’s election outcome. Gantz, by the way, is currently the minister of defense in Netanyahu’s transition government, and according to their May 2020 coalition agreement, he is scheduled to switch jobs with Netanyahu and become prime minister in November 2021. Some are hoping that if a new government is not formed by then, Gantz would indeed take over as prime minister.

Politics is a deceptive arena, and that is certainly true for Israeli politics over the past two years that has centered solely on efforts to unseat Netanyahu. The former chief of staff of the Israel Defense Forces (IDF) plunged into the political waters in late 2018, forming a party and becoming almost instantaneously Netanyahu’s leading challenger and alternative. A newbie, inexperienced politician who manages to sweep up over a million supporters in the space of several months was an unprecedented phenomenon in Israeli history.

What made the retired general the messiah of the political center-left? Mainly his portrayal as the exact opposite of Netanyahu, the good guy versus the bad, Netanyahu in the role of the villain, an allegedly dark and destructive persona vis-a-vis the tall, blue-eyed well-meaning hero on a mission to save the country.

This portrayal was highly effective through three consecutive election campaigns in which Gantz headed an amalgam of parties that called itself Blue and White, alongside Lapid and two other former IDF chiefs — Gabi Ashkenazi (currently Israel’s foreign minister) and Moshe Yaalon. Blue and White was marketed to voters sick of Netanyahu as a sophisticated, elite rescue squad, generating hopes of change.

However, the initiative flopped. Netanyahu managed to survive three elections, and in the climate of fear induced by the emerging coronavirus pandemic, Gantz decided to put an end to the political stalemate. He entered a power-sharing agreement with Netanyahu, joining a so-called unity emergency government to deal with the coronavirus pandemic. He paid a heavy price. Blue and White was split in two, and Lapid and Yaalon joined the ranks of the Knesset opposition. Gantz was left with 15 Knesset members and was appointed defense minister. His sidekick Ashkenazi was given the Foreign Ministry portfolio. Gantz insisted there had been no other way to defuse the political and social crisis. As he often does, Gantz reverted to military lingo, likening his move to that of a soldier throwing himself on top of a grenade to shield others.

While Gantz saw his action as altruistic, some 1 million voters who backed him so that he could replace Netanyahu felt he had sucker punched them. The ensuing disappointment gave rise to a widespread protest movement, dubbed the “black flags’ protest,” which for months led mass demonstrations outside the prime minister’s official Jerusalem residence and along highways and bridges throughout the country. Gantz was reviled by the very people who had pinned their hopes on him and were now humiliating him and labeling him a traitor, a thief and a failed politician. His polling figures plunged accordingly.

Within the government, Gantz found himself clashing constantly with Netanyahu, and their so-called unity government turned into a boxing ring at the height of the coronavirus pandemic. The more his own camp derided him, the more determined he became to prove them wrong by taking action within the government that he described as defending Israeli democracy. But that did not help him, either. Three months ago, a handful of renegades within Blue and White voted against the government in favor of dismantling the Knesset and calling new elections. The ensuing events were even worse for Gantz — more than half his Knesset faction resigned, leaving him even more of an isolated outcast.

Those were the circumstances under which he mounted his final stand, launching an aggressive campaign against Netanyahu. He was once again depicted as a good guy victimized by a scoundrel but willing nonetheless to sacrifice himself in order to save the state. The message appears to have worked. As aforementioned, some 250,000 Israelis were sold on the idea that they must save the well-meaning man who had come to save them. Gantz survived and will play an important role in the coming political moves to bring down Netanyahu.