The Street Band plays music for free in Gaza's public places, in a attempt to help Gazans forget their daily sufferings. 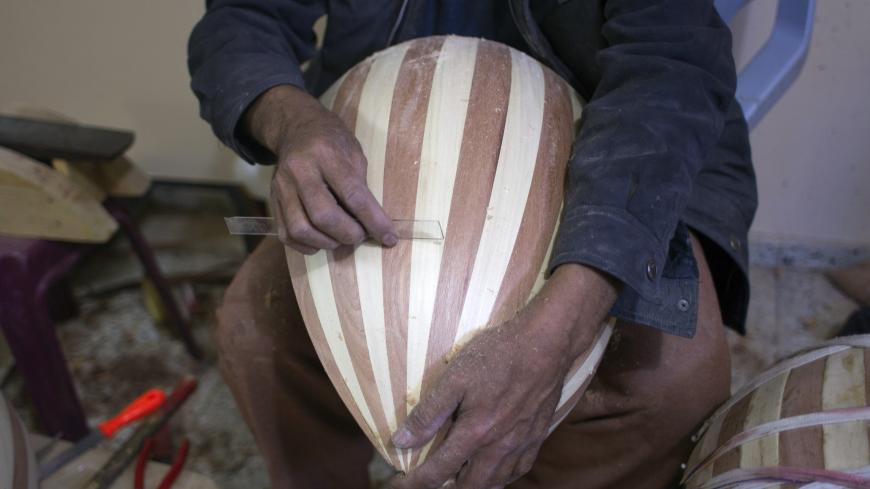 Hammad Atwa, a Palestinian man who makes lutes, known in Arabic as an "Oud", works on a musical instrument at the Khan Younis refugee camp in the southern Gaza Strip on Feb. 19, 2014. - SAID KHATIB/AFP via Getty Images

In an attempt to spread positive energy among the local residents, three young Palestinian men from the impoverished and blockaded Gaza Strip, home to 2 million people, play music in outdoor public places for free.

The three musicians, who performed at weddings before the coronavirus outbreak, believe that they can help people relieve psychological stress resulting from the complicated political and economic situation in Gaza.

The band members play well-known songs on the flute, the organ, the clarinet and the guitar. "We choose beaches, parks and streets to spread our music and positive energy among the people," Amir Kamal, a clarinet player, told Al-Monitor. "We call ourselves the Street Band. We are here to help people get rid of negative energy caused by the difficult conditions they have been suffering from since 2007."

The 27-year-old musician said that the current situation is "similar to what followed the latest and largest Israeli war in 2014." Then, people stayed home for an extended period of time as well, without jobs, hope and peace, which adversely affected their psychological well-being.

Kamal said, “We see people's facial expressions, so we know when their mood changes.” According to Kamal, music not only manages at putting a smile on people's faces, but also brings internal peace to the listeners in public places.

He noted that the young generation that is growing up amid a most complicated situation in the coastal enclave "can overcome challenges through music."

As he played a Turkish track, he said, "For decades everything you heard about Gaza was our involvement in a conflict. But we are here to show that we are playing music and singing for life, hope and peace."

Jihad Abu Shamala, a 22-year-old guitarist and singer from the town of Beit Lahiya, in the northern Gaza Strip, spends at least six hours a day performing music with the band.

"Music is life for the soul. It gives positive energy to listeners," he told Al-Monitor, while playing his guitar. He said that they choose crowded places to share their music with more people.

According to Abu Shamala, the situation in the Gaza Strip will not change any time soon, and as the situation keeps deteriorating more people will die of heart attacks and poor health conditions. To make matters worse, Gaza also lacks medical staff. "We cannot change the situation, but we can help people through music. It will not cost them anything," he added.

“Not only does the crowd benefit from our music, we also improve our musical skills,” Aboud Mohammed, a 23-year-old organ player told Al-Monitor.

He said that he and his bandmates are self-taught through YouTube videos. They play the music of classical Arab singers such as Egyptian singer Abdul Halim Hafez and Lebanese singer Fayrouz, in addition to Western singers. He and the bandmates, he added, are proud of themselves when they see people smile.

Al-Monitor saw a 10-member family sit and listen to the Street Band, with the children singing along to the music. Ibrahim Sarsour, the only breadwinner of the family, said he was highly impressed by the band's performance.

"I rarely go out with my family to have a fun time, but I forgot my problems for a moment," said the 60-year-old father of eight, adding that he missed "such moments that give him internal positive energy."

Sarsour said that the majority of the population has been suffering for 13 years now, while the outbreak of the novel coronavirus has been contributing to their hardships amid a lack of medical staff and equipment.

"Those young men have succeeded in making me forget all my negative energy today," he noted. "Gazans need to live a simple, peaceful and normal life just like other people around the world."

More than 60% of Palestinians suffer from depression and psychological pressure, the Gaza Community Mental Health Program reported in 2017, noting that the severe economic and political conditions are the cause of this.

Israel imposed a tight blockade on the Gaza Strip right after Hamas violently seized control of the territory in 2007. Since then, the political and economic situations have been deteriorating.

Israel has waged three large-scale military offensives on the enclave — the longest one was during the summer of 2014, which lasted 50 days and left large-scale destruction.

Sami Owaida, a psychiatrist at the Gaza Community Mental Health Program, told Al-Monitor, "A large percentage of the residents of this besieged area suffer from the most severe types of depression as a result of the deteriorating political and economic conditions."

Therefore, Owaida concluded, the local community needs to be exposed to positive and inspiring acts such as music.