A song by the Egyptian band Gawy is featured in "Black Widow," which stars Scarlett Johansson. 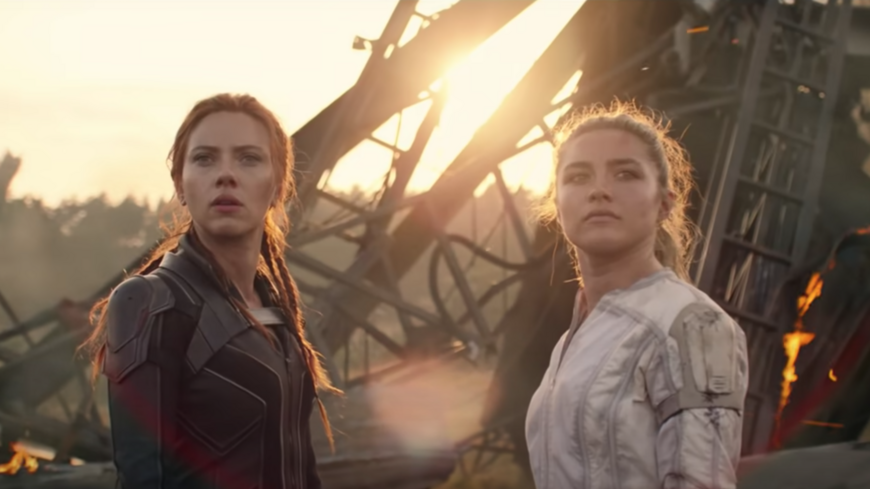 Scarlett Johansson (L) is seen in a screen grab from a trailer for "Black Widow." which features a 2015 song by the Egyptian alternative band Gawy. - YouTube/Marvel Studios

CAIRO — For the first time, an Egyptian song has appeared in a Marvel Studios movie.

"Atshan Ya Zeina" ("I’m Yearning, Zeina"), a song by the Egyptian alternative band Gawy, is part of the soundtrack of the American superhero movie “Black Widow” starring Scarlett Johansson. The film was released this month.

"Black Widow," based on the Marvel comic of the same name, is screening in US and Egyptian movie theaters and other cinemas worldwide.

The song, part of which is used in the background of a scene in the movie, tackles the story of a lover conversing with and blaming his beloved, symbolically intended to be his troublesome homeland.

"Atshan Ya Zeina" was the first track released by the band in southern Egyptian dialect; it is an adaptation of folklore and traditional music. The lyrics were written by Ahmed el-Gamal while the music was composed by Mohamed Abdel-Latif. Abdel-Latif also sings the tune, along with Nehal Kamal, in the movie soundtrack.

“The song dates to March 2015 before there was even a band. At that time, the track was a real hit when it went viral, attracting thousands of listeners in the first two days of release,” Gamal told Al-Monitor. The song was placed on SoundCloud; its popularity led to Gamal and Abdel-Latif's forming the band in September 2015. The song later became part of the band's first and only CD, "Albek Yesaa" ("Your Heart is Big Enough").

The band started dealing with Marvel at the end of 2018 through a mediator. The film was shot two years later. “At first we didn’t know that the mediator asking us about the song wanted to buy it for Marvel,” Abdel-Latif recalled.

“It’s a huge success for any band to take part in a Marvel production, a step toward having an international presence,” Gamal said.

Abdel-Latif could not agree more. “This step pushed us forward to be more selective with our words and music in our future album to be released soon,” he said.

Since its formation six years ago, Gawy has been blending poetic recitation with distinctive tunes, putting them into a contemporary musical form.

The group performs a blend of Eastern and Western music played on keyboard, bass guitar, electric guitar, various percussion instruments and qanun (related to the dulcimer), amounting to what the band members call “Eastern fusion.”

The name Gawy is derived from an incense that releases a remarkably attractive scent, richly relating the distinguished mixture of poetry and songs, recited and sung in colloquial Egyptian Arabic, and sometimes in southern dialect.

The band has adopted a unique approach to the songs and poems it performs. Every piece is a tale with a beginning, middle and end reflecting on the reality of Egyptians’ everyday lives — their hardships, dreams and aspirations.

Before Gawy came along, Egyptians had not heard such a combination of poetry and song for many years. Starting in the 1960s, Ahmed Fouad Negm, a poet who died at 84 in 2013, and Sheikh Imam, a renowned singer, composer and oud (eastern lute) player, both recited poetry and sang together to criticize Egyptian officialdom and other governments. Sheikh Imam died at 76 in 1995.

In the case of Gawy, this fusion of poetry and music has become a contemporary art form attuned to younger generations.

"Black Widow" in some ways symbolizes the bitter reality in some countries. Natasha, played by Johansson, has been stripped of her childhood by a villain, a Russian intelligence agent running a covert project that gathers young girls from around the globe, including the Middle East and Africa, to train them to act as powerful assassins in an attempt to control the fate of the world.

Natasha eventually frees herself from the control of the evil Russian, devoting her life to setting free other such female killers, who have lost their willpower due to chemical manipulation, from the grip of this man.

The Russian agent could stand for any dictator who rules his people with an iron first. At some point, Natasha partially succeeds in her mission.

Johansson is not new to controversy when it comes to Egypt. In December 2020, she posted a video online in which she fiercely criticized the Egyptian government for detaining four staffers of the Egyptian Initiative for Personal Rights, a prominent local human rights group.

Several Egyptian media outlets known for being loyal to the regime were quick to slam Johansson, considering her comments as interference in Egyptian domestic affairs.