“Music has logic, and anything can make a sound,” says Shady Rabab, who received a UN prize for addressing poverty and waste management in Egypt by making musical instruments from trash and training young people in a band. 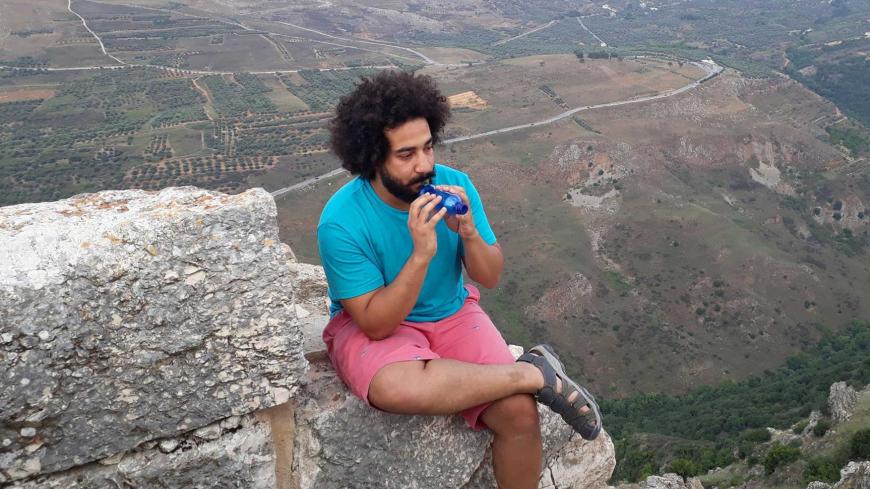 Musician Shady Rabab plays a pipe made from a water bottle in an image uploaded June 19, 2018. - Facebook/shady.rabab

LUXOR, Egypt — For 7-year-old Mohammed Taha, music can easily flow out of an empty Pepsi bottle or a curtain rail.

Taha is a garbage collector who walks from bin to bin. About a year ago, he met Shady Rabab, a musician and activist who thought that once you understood the principles of making pleasant sounds, music could come out of anything, even dismissed materials from garbage bins. He also went a step further, teaching garbage collectors — a job mostly held by Egyptian children — to make their own musical instruments and play them.

Rabab's Garbage Conservatory Project is one of the seven projects that have been selected for Young Champions of the Earth prize designed by the United Nations for young environmentalists. Rabab will pick up the award Sept. 26 in New York.

Rabab’s band consists of 70 children — mostly garbage collectors. Every week for more than a year now, Rabab has gathered them in small groups at his art collective located right across from Luxor’s giant stone statues known as Colossi of Memnon. There, he teaches them how to fabricate and play the instruments. He often holds a flute with which he teaches the kids how to control the sound by blocking the holes, and he keeps a guitar or saxophone on a nearby table.

These instruments are unlike the ones the kids may see in stores. “The guitar is an empty Pepsi bottle, and [the] didgeridoo [a form of thin flute] is a curtain rail that [Rabab] recently bought with a bunch of hardware,” Taha told Al-Monitor.

Rabab opened the Rabab Luxor Art Space a year ago along with four friends in a bid to support artists in Upper Egypt and exhibit the upcycled musical instruments. He now runs the outdoor art collective, where his huge collection of upcycled musical instruments hangs on the walls: a guitar made of old wooden cylinders and strings, a saxophone made of a metal tube and a gas cylinder regulator, and a clarinet made of an electric wire wrapped in ropes. Add to this a flute made of bamboo sticks covered with fish skins.

The local myth is that the statues sing in the morning. In fact, it is wind blowing through the cracks of the Colossi of Memnon — but it sounds like melancholic music.

Rabab, a self-taught musician who has been playing instruments for 13 years, told Al-Monitor, “I wanted to open a show space where I could exhibit the largest collection of eccentric musical instruments ever, but I discovered that I could not afford it.” So he opened this outdoors art collective where regular musical performances and art lessons take place.

He owes his recycling adventure to lack of funds. “I wanted to turn a rebab [a string instrument] I had into an electric guitar. But I needed a magnetic transducer, or a pickup, to catch the vibrations — and I found out that pickups cost more than 800 Egyptian pounds [$44.85],” he explained.

Rabab started surfing the internet to find out how a pickup works. “I discovered that I only needed a small magnet and a copper wire to create one. I looked for a hardware vendor and asked him for the components, which I was able to buy for 3 Egyptian pounds ($0.17).”

Based on the instructions he found online, Rabab managed to make the pickup. “I was very happy. It cost me 3 instead of 800 Egyptian pounds.”

He then made a clarinet from a bundle of bamboo sticks that grow in a nearby canal.

“It was then that I discovered that I could create many instruments out of nature or out of waste. I use Pepsi bottles as makeshift musical instruments because the empty air in them make a similar sound to the one produced by some brass instruments. Music follows a certain logic, and everything can make a sound,” he said.

He also found a way to pay homage to his relatives and friends by naming the instruments after them. He made a guitar-like instrument made of a metal box of cookies that belonged to his grandmother. He named this instrument the “farida,” an Arabic name that means "unique." Besides the farida, there is the "mamlooka," a string instrument made of leather, wood and strings, and there's the "farah," which is made of plastic bottles.

So far, Rabab has produced about 100 musical instruments out of garbage, and he is putting these up for sale both at the center and on his Facebook page. These instruments include the Australian didgeridoo; a bouzouki, which is a long-necked fretted lute that has eight strings and looks like a guitar; a brass instrument he made out of a plastic bottle; and the saz, another string instrument particular to the Middle East.

In March, Rabab organized his first art exhibition of musical instruments in the Lebanese capital of Beirut, while his second exhibition — a two-day affair — kicked off June 23 in Beirut under the title “Garbage Music.”

The Garbage Conservatory targets children in particular, especially those who are unable to play or buy expensive instruments. Rabab pointed out that there are a lot of parents who want their children to learn to play musical instruments but cannot afford to buy them.

This is the problem that Rabab’s project aims to solve. “What if every child could create a musical instrument out of waste without having to pay anything? What will happen then?” Rabab wondered. “We would certainly find musical bands spreading music around Egypt."