Egypt is getting ready to serve as the hub for the manufacturing of a coronavirus vaccine in Africa, with the help of China. 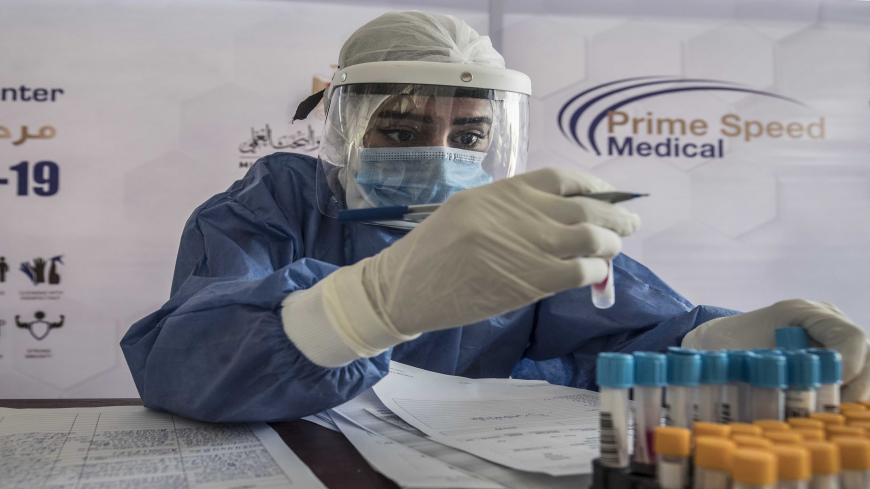 CAIRO — Egyptian Minister of Health Hala Zayed announced July 20 during a meeting with the Chinese ambassador to Egypt, LIao Li Chang, that Egypt will be the future hub for the manufacturing of a coronavirus vaccine in Africa, in cooperation with the Chinese government.

Khaled Megahed, the spokesman for the Egyptian Ministry of Health, said in a press statement July 20, that the ministry’s national VACSERA center and a Chinese company conducting trials to develop a vaccine, agreed to pave the way for manufacturing in Egypt, once the vaccine is proven effective. He did not name the Chinese company.

“Once the vaccine proves effective and safe, an agreement will be signed between Egypt and China for production and for transferring the technology to Cairo. The production lines in Egypt will also be assessed in terms of quality and effectiveness to pave the way for production,” Megahed added.

A source at the Health Ministry told Al-Monitor on condition of anonymity that the Chinese company that reached the agreement with Egypt is Sinovac.

On July 25, Zayed began procedures for assessing the readiness of VACSERA’s plants, to ensure the efficiency of production lines, infrastructure and equipment, and pinpoint and address any requirements or challenges that may occur in the production process.

During a visit to the center, Zayed discussed the number of required vaccine doses and the production capacity needed for Egypt to expand into African countries. She recommended the increase of production capacity and the restructuring of production lines, and discussed the possibility of including foreign companies in the process, in a bid to exchange expertise with VACSERA and place Egypt on the right track for manufacturing.

Egypt, which held the presidency of the African Union (AU) in 2019, attaches great importance to the African continent, especially in light of the coronavirus pandemic.

Cairo has taken part in several African summits addressing the implications of and response to the virus spread, including the African-Chinese virtual summit that took place June 17.

In this context, Gihan al-Assal, deputy chief of the Scientific Committee to Combat Coronavirus at the Health Ministry, told Al-Monitor via phone, “Egypt’s endeavor to become a hub for the production of a vaccine is a significant step that consolidates Egypt’s leadership role in the continent. But this is only possible if the vaccine proves effective.”

She said, “Egypt is already conducting trials for some vaccines, which will continue if an agreement is signed with the Chinese company. Vaccines differ in types and compositions and the goal of the trials is to develop a vaccine with the least side effects."

Assal noted that “the Chinese company has reached an advanced stage in the trial. We have to wait for the results.”

Egyptian Minister of Higher Education Khaled Abdel Ghaffar said during a meeting July 2 with the prime minister that a number of research trials conducted by the National Research Center for the production of a coronavirus vaccine was included among the global attempts in the pre-clinical research stage. He noted that Egypt has the highest number of clinical trials in Africa and the Middle East, numbering 73.

Essam al-Kady, undersecretary of the parliamentary Health Committee, told Al-Monitor via phone, “Talk about Egypt’s production of a Chinese vaccine for the virus is premature, as the vaccine has yet to prove effective.”

He added, “If Egypt was able to manufacture the vaccine — in case it proved effective — this would be a very significant step. This would mean producing and selling the vaccine at a lower cost compared to the cost of importation. But even if the Chinese company proved the effectiveness of its vaccine, Egypt has yet to conduct its own clinical trials to verify any side effects."

Egyptian Prime Minister Mustafa Madbouly said in a press statement July 23 that Sisi attaches great importance to the coronavirus vaccine and has issued directives to the relevant authorities to ensure the provision of the vaccine as soon as it is made available by international companies.

Tamer Essam, head of the Egyptian Drug Authority (EDA), said during a July 5 meeting of the authority’s medical team, which was chaired by Madbouly, that the EDA is constantly following up on the development of the global drug market to ensure that all possible treatments and preventive measures against the virus that causes COVID-19 are available for Egyptians, and that Egypt’s share of any possible vaccine has been secured, should it prove effective, by any global producer.

On July 4, Sisi issued directives to the government to accelerate the process of establishing strategic warehouses for medical storage in order to ensure enough reserves, be they local or global products, necessary for the current and future medical supplies consumption.

Mahmoud Fouad, head of the Egyptian Center for the Right to Medicine, an independent nongovernmental organization, told Al-Monitor via phone, “The vaccine is the first line of defense for the coronavirus and would completely shut the door on its spread, but so far there is no internationally approved vaccine.”

He noted, “The Chinese vaccine is still in the experimental stage and has yet to be mentioned in any scientific journal. Therefore, it would be unwise to agree on its production before it is internationally approved. Egypt’s interest in exporting the vaccine is not very logical, especially since the number of infections in Africa are relatively low compared to other continents."