Erdogan banks on Trump’s friendship to deal with Libya

Turkey needs the support of the United States more than it did months ago to implement its regional agenda in Libya and beyond. 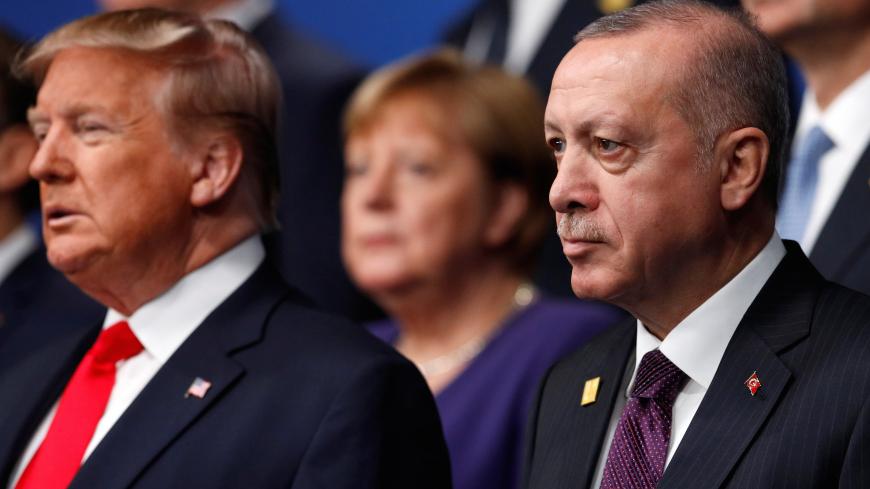 US President Donald Trump and Turkey's President Recep Tayyip Erdogan pose for a family photo during the annual NATO heads of government summit at the Grove Hotel in Watford, UK, Dec. 4, 2019. - REUTERS/Peter Nicholls

Throughout the Cold War, for almost 50 years, the United States and Turkey were close allies. The backbone of the alliance was military cooperation. Shared values of democracy between the two members of the “free world” was secondary to their attachment to the collective security and strategic interests.

With the end of the Cold War, this bilateral relationship began to transform, and with the 2003 Iraq war, mistrust between the two allies reached a peak. In 2003, American troops stationed in Iraqi Kurdistan arrested a group of Turkish soldiers in Sulaimaniyah, outraging the Turkish public. The distance between the two countries grew further by Ankara’s policy choices that led Turkey to drift away from the Western security bloc.

The election of President Donald Trump has marked a new era for the United States and Turkey. The personal ties between Erdogan and Trump have upstaged the institutional ties in the bilateral relations, as the two leaders have many similarities.

Namik Tan, a former Turkish ambassador to Washington (2010-2014), pointed out this similarity in a May 29 tweet after Trump took a page from Erdogan’s playbook and moved to impose control over social media in response to the protests over the murder of George Floyd.

“While we were saying Turkey will become a little America, America became a big Turkey,” Tan wrote.

Trump’s green light for Turkey’s 2019 military operation against the Syrian Kurdish groups, Washington's strongest allies in the fight against the Islamis State in Syria, has been the most striking example of the strong personal ties between the American and Turkish leaders. The result of the operation was a geopolitical earthquake in Syria and the Middle East with global ramifications.

"Confusion ensued in Syria and Washington in the hours after Trump agreed during a phone call with Turkish President Recep Tayyip Erdogan to move US troops out of northeastern Syria to clear the way for a Turkish military operation in the area,” NBC reported after the greenlight. “According to multiple current and former US officials, the White House's announcement of the decision late Sunday night blindsided not just America's Kurdish partners in the fight against the Islamic State militant group … in Syria, but almost everyone — senior officials at the Pentagon, the State Department and the White House, lawmakers on Capitol Hill and US allies in Europe and the Middle East."

Erdogan seems to have similarly big expectations from his latest conversation with Trump on June 9. The discussion will “transform Turkish-American relations,” he said in a live interview with Turkey’s state-owned TRT channel, stressing the intimacy between the two during the phone call, including a joking exchange that Erdogan mentioned without providing further detail.

Apparently, aside from conveying information about the latest military situation in Libya, Erdogan also told his American counterpart that there was a “terrorist Kurdish” involvement behind the protests in the United States. Trump is so obsessed with the amorphous international leftist movement known as antifa that he has drawn a connection between it and the 75-year old man marauded by police in Buffalo.

Erdogan said he told Trump that there was “a significant association” between antifa and Syrian Kurdish People’s Protection Units, which Turkey considers a terrorist organization. Erdogan added that he “expect his American counterpart to be sensitive on this issue.”

One of the interviewers, a chosen sycophant, polished Erdogan’s argument, asking, “You had warned him before, hadn’t you? … And terror struck back at America. That was you had been preaching all along: If you feed terrorism, it will strike you.”

The Turkish president ended the lengthy interview by saying, “Yes, one day it rebounds and hits you.”

Yet the realpolitik in his approach to Trump should not be missed. Erdogan’s endeavor to enlist the American president as his soulmate is not solely emotional. The military success in Libya that put Turkey on the map as the main supporter of Libya's internationally recognized Tripoli-based Government of National Accord (GNA) heralds potential confrontation with Russia in Libya and Syria.

Perhaps more importantly, Turkey’s Libya adventure will put Turkey in a dangerously escalating position vis-a-vis Greece, Cyprus, France and some other EU countries. The maritime agreement Turkey reached with the GNA in 2019 overlaps Greece's Exclusive Economic Zone and thus considered a violation of sovereignty by Athens. The conflict continues to escalate as Greece recently signed a maritime agreement with Italy in response to Turkey’s move.

From Syria to Libya, from the Black Sea to the Mediterranean, Erdogan now figures that Turkey needs America politically and strategically more than it did some months ago. He learned by experience that getting the United States on board by making Trump his personal friend is easier than any other way.