Turkey sees success in Libya shaping relations with US

Turkey and the United States reached "some agreements" on Libya during a phone call, Turkish President Recep Tayyip Erdogan says. 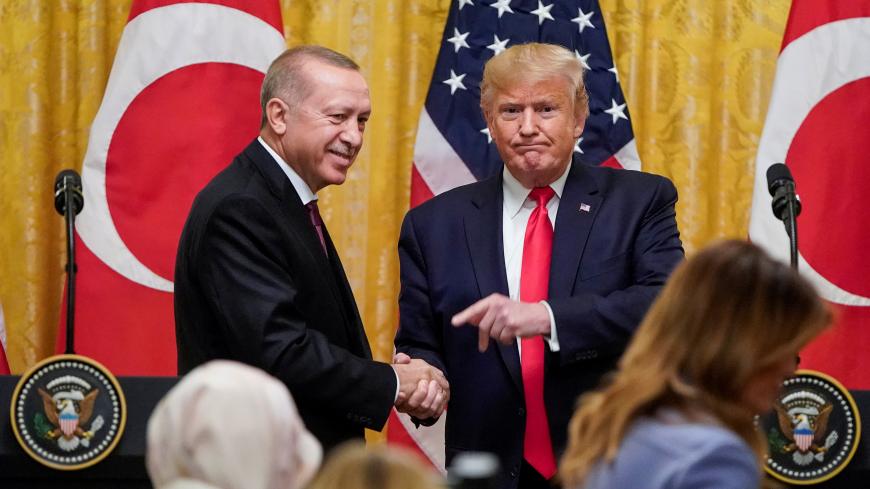 ISTANBUL — Turkey and the United States may embark on a new era in their relationship over the conflict in Libya, President Recep Tayyip Erdogan said after a telephone call with his US counterpart Donald Trump, adding that rebel commander Khalifa Hifter may soon be sidelined in diplomatic efforts to establish peace.

The two leaders also discussed protests against police violence in the wake of the killing of African American George Floyd in Minneapolis last month that have spread across the United States and to other countries, with Erdogan warning Trump that Kurdish militants were backing protesters in the United States.

In an interview with state broadcaster TRT late on Monday, Erdogan said Trump acknowledged Turkey’s success in reshaping the conflict in Libya, where the NATO member’s entry to support the internationally recognized government of Fayez al-Sarraj has dramatically shifted the war in his favor.

“A new period may begin between the US and Turkey regarding the [Libya] process, and we had some agreements during our conversation, and such a step could be taken,” Erdogan said without elaborating.

A statement from the White House said the two leaders discussed the Libyan conflict, Syria and the eastern Mediterranean region, but did not offer further details.

The United States has largely remained outside the fray since Hifter’s Libyan National Army (LNA) launched an offensive last year to capture the capital Tripoli that has killed hundreds of civilians. The energy-rich nation has been wracked by violence since 2011, when former leader Moammar Gadhafi was deposed with NATO support.

Now, international efforts to resolve the fighting between Sarraj’s Government of National Accord (GNA) forces and the LNA, which receives support from the United Arab Emirates, Egypt and Russia, are gathering pace.

Erdogan met Sarraj in Turkey last week, while LNA officials held talks in Egypt that resulted in a call for a cease-fire. Saraj-allied forces rejected the proposed truce, likely seeing a cease-fire as an effort to stymie the GNA advance, which has inflicted heavy losses on Hifter’s forces while capturing strategic points in Tripoli last week.

“The most vital areas have been retaken … and the advance continues. Hifter has become crazed as these areas come under Sarraj’s control,” Erdogan said. “The developments indicate to me that Hifter could be tossed out of the process at any time.”

Hifter derives “all of his power” from Russia but is now on the retreat, Erdogan said. Turkey sees the capture of areas with natural gas and oil deposits as crucial and “and this upsets Russia,” he said, adding he plans to soon speak with Russian President Vladimir Putin.

Putin praised Egypt’s efforts to broker a cease-fire, while his foreign minister agreed with his Turkish counterpart this week to collaborate on a peace process.

Erdogan’s call with Trump came despite Turkish officials’ sharp criticism over the killing by police of Floyd on May 25. In the call, Erdogan told Trump Turkey was saddened by the “inhumane” and “racist” killing of the unarmed man that set off the large-scale protests. Turkey has also “condemned” the US response over the heavy-handed police tactics that targeted Turkish journalists covering the protests. The comment elicited incredulity from critics of Turkey’s own record on press freedom that has made it the world’s biggest jailer of journalists. Two more journalists were detained this week in an espionage probe centered around the Turkish military’s role in Libya.

Trump is aware of allegations by Turkey that antifa, an informal movement whose name is derived from “anti-fascist,” has connections with foreign leftist organizatons and will assess information Turkey has provided to the United States on the activists, Erdogan said.

Turkey alleges antifa has links with the armed Kurdistan Workers Party (PKK), which the United States has labeled a terrorist organization for its three-decade insurgency in Turkey, and Syria’s People’s Protection Units (YPG), a Kurdish militia the United States armed in the fight against Islamic State. Erdogan claimed antifa took part in “serious operations” in Syria.

“I told Mr. Trump that it’s significant that groups like the YPG and PKK have come together in the US with the terrorist organization called antifa,” Erdogan told TRT, adding that he warned Trump that US support for the YPG “would one day come to strike you.”

Trump has said he will designate antifa a terrorist group and blames the movement for violence that has accompanied the largely peaceful protests in the United States. The FBI has said it has no evidence antifa was behind the violence.

The eruption of anger over Floyd’s killing and the ensuing crackdown have prompted comparisons in Turkey between the two presidents, including “Trump’s attempt to start a culture war over the current unrest” with Erdogan, who “orchestrated a conservative backlash” against anti-government protests in Turkey in 2013, Asli Aydintasbas, a senior policy fellow at the European Council on Foreign Relation, wrote in The Washington Post.

The protests in the United States have allowed Trump to divert the conversation from his government’s handling of the coronavirus pandemic, which has killed more than 111,000 Americans. Turkey, for its part, is heralding its “success” in battling the disease, including one of the world’s lowest death rates of about 2.8%, while trying to marginalize the opposition in the response.

“Trump and Erdogan are … looking to protect their strongman image during the pandemic, and clearly share similar ideas about how to deal with protests. But it is coming at the cost of unity within their respective nations,” wrote journalist Sebnem Arsu in The Independent.

In the interview, Erdogan said with a chuckle that Trump was impressed by Turkey’s handling of the coronavirus outbreak.

Separately, Erdogan said Turkey will take the “necessary steps” on the status of Istanbul’s Hagia Sophia, a sixth century world heritage site, after a top court rules on a lawsuit next month that seeks to convert the museum into a mosque. Erdogan has reportedly already ordered officials to draw up a plan opening the site to Muslim worship.

The president has in recent years revived a once-fringe cause by Islamists to make Hagia Sophia a Muslim house of worship again. Built by Byzantine Emperor Justinian, Christendom’s greatest cathedral became a mosque following the 1453 Ottoman conquest of Istanbul, then a museum in 1934 in what has largely been regarded as a concession to its significance to multiple faiths.