Turkish President Recep Tayyip Erdogan told US President Donald Trump today that Kurdish groups in Turkey and Syria are working with the anarchist group allegedly linked to violence at otherwise peaceful protests in the United States. 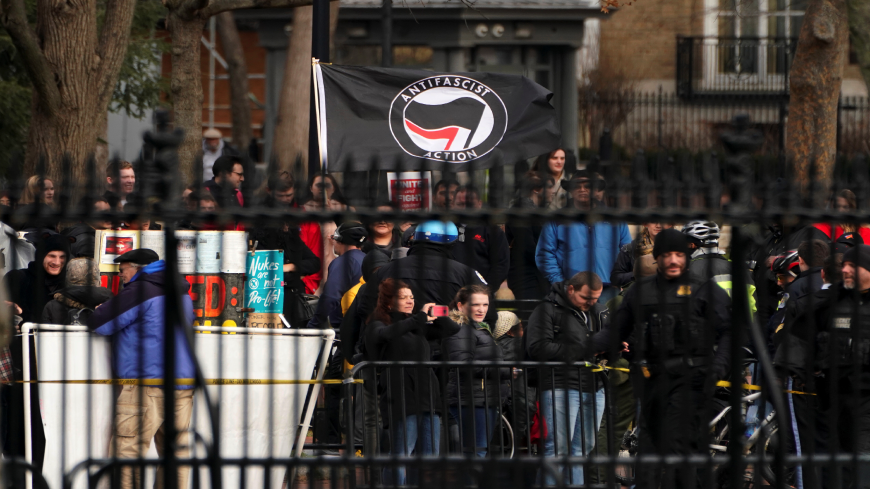 The group Antifacist Action holds a rally outside of the White House in Washington, U.S., January 5, 2019. - REUTERS/Joshua Roberts

Turkey tried today again to connect protests against police violence in the United States to Kurdish groups in the Middle East.

In a call with US President Donald Trump, Turkish President Recep Tayyip Erdogan said that people committing acts of violence and looting in the United States are cooperating with the Kurdistan Workers Party (PKK) in Turkey and the People’s Protection Units (YPG) in Syria. Erdogan and Trump also discussed Libya, according to Turkey’s state-run Anadolu Agency.

The PKK fights for greater Kurdish political rights in Turkey and is considered a terrorist organization by both Ankara and Washington. The YPG in Syria shares a communalist ideology with the PKK but denies further links. The United States backs the YPG in its fight against the Islamic State. Turkey strongly and vocally opposes this support, believing the YPG to be the Syrian version of the PKK.

Erdogan’s comments are related to the antifa movement in the United States. The loosely organized movement — whose name means anti-fascist — has allegedly been involved in many anti-Trump demonstrations — some of them violent — as well as the ongoing George Floyd protests in the United States.

Some antifa supporters fought in the YPG in Syria, which is the basis of the Turkish government’s claims of a connection. Following reports of alleged YPG-antifa ties in Turkish media, some foreign YPG fighters told Al-Monitor there were some antifa supporters in the group but there was no formal relationship between the two.

Turkey took some territories from the YPG last year following an extensive military offensive, seeing the YPG presence near the Turkish border as a threat. The YPG says Turkey and its Syrian rebel allies are pursuing forced demographic change against Kurds in the area.

Erdogan’s remarks follow Trump’s threat to label antifa a terrorist organization due to its alleged role in looting and property destruction that occurred during the protests in the United States.

The two presidents also agreed in their conversation to work together for peace and stability in Libya, according to the Anadolu Agency. Turkey is a major backer of the UN-recognized Government of National Accord (GNA) in Libya. The GNA has lately had significant military success holding on to the capital, Tripoli, against eastern-based Gen. Khalifa Hifter’s Libyan National Army. The United States opposes Russian support for Hifter.