Eastern Libya’s Gen. Khalifa Hifter vowed to fight Turkey’s forces as Libya’s Government of National Accord is poised to press its counteroffensive against the key coastal city of Sirte with Ankara’s military support. 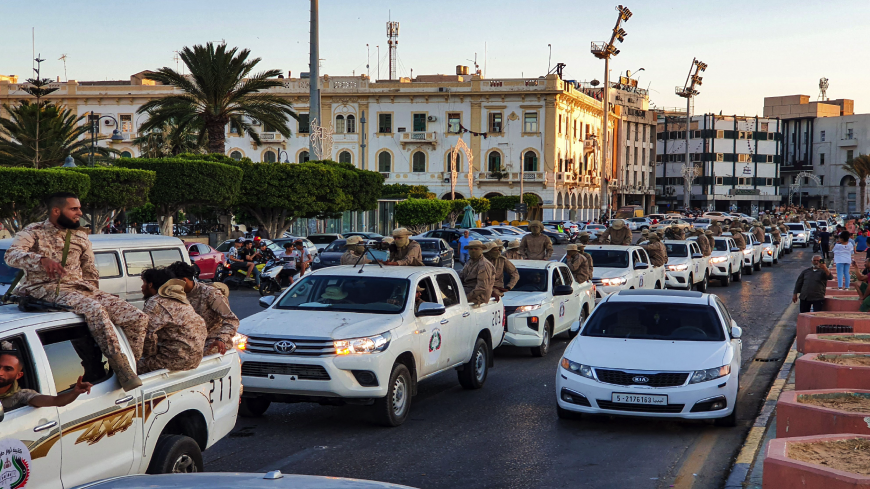 Vehicles of the Tripoli Brigade, a militia loyal to the UN-recognized Government of National Accord (GNA), parade through Martyrs' Square at the center of the GNA-held Libyan capital Tripoli on July 10, 2020. - MAHMUD TURKIA/AFP via Getty Images

Eastern Libyan strongman Khalifa Hifter has vowed to fight Turkey’s forces as the UN-recognized Government of National Accord (GNA) in Tripoli is poised to press its counteroffensive against the key coastal city of Sirte with Ankara’s military support.

In an Eid al-Adha address to his forces over the weekend, Hifter — who is launching an insurgency backed by Egypt, the United Arab Emirates, France and Russia — likened Turkish President Recep Tayyip Erdogan’s military support for the GNA in Libya to colonial occupation, accusing Erdogan of “coming to Libya in search of his ancestors’ legacy,” Saudi Arabia-based Arab News reported.

“We tell him that we will translate the legacy of your ancestors with bullets,” Hifter said, promising “no mercy because they do not deserve mercy.”

Why It Matters:  Hifter has vowed to resist the Tripoli-based government’s counteroffensive in recent months, but his appeals to anti-colonial sentiment come as Saudi Arabia is seeking to unify Arab neighbors in support of the eastern Libyan commander.

The United Nations-recognized GNA now threatens to take Sirte and central Libya’s Jufra region, both stepping-stones to Tripoli regaining control over much of the country’s crude oil supply.

What’s Next: Erdogan seems unconvinced by Egyptian President Abdel Fattah al-Sisi’s threats to militarily intervene on Hifter’s behalf if the GNA presses the attack on Sirte or Jufra. And the US military is alleging that Russia has placed military hardware and possibly Wagner mercenaries outside of Sirte, suggesting the Kremlin is taking no chances on its gains so far.

Despite a recent agreement between Turkey and Russia to work toward establishing a cease-fire in Libya, Ankara so far shows little sign of readiness to let Hifter off the hook despite a surge in civilian deaths as a result of the renewed fighting.

The United Nations reported in June that several mass graves were found southeast of Tripoli after Hifter’s forces withdrew from the area. Hifter is a US citizen who was connected to the CIA in the 1980s.

Know More:  Al-Monitor examines the fissures that could open up in Libya’s conflict if Turkey and the GNA press the attack on Sirte and if Sisi responds with a military incursion of his own.