Following the failure of a Russia-Turkey-brokered peace deal in Libya, Turkey's president reaffirmed his pledge to defend the government in Tripoli ahead of Sunday’s Berlin Conference. 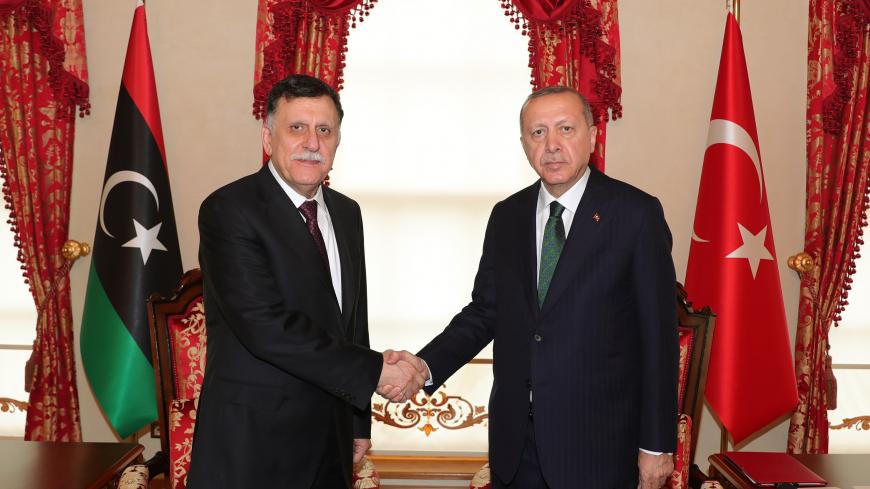 After seven hours of indirect talks, the leaders of Libya’s rival factions left Moscow Monday without agreeing on a cease-fire deal.

Russian and Turkish officials — which back opposing sides — had led the effort but came away empty handed when Libyan National Army (LNA) commander Khalifa Hifter refused to sign a draft proposal he claimed did not satisfy his conditions.

In response, Turkish President Recep Tayyip Erdogan said Tuesday he would continue defending the internationally recognized Libyan Government of National Accord (GNA). Speaking before the Turkish Parliament, Erdogan said Hifter had “run away” from cease-fire deal and vowed Turkey would not refrain from teaching the eastern Libyan commander “a lesson” if his LNA forces proceed with their 10-month-long offensive on Tripoli.

“The coup-plotting Hifter first said yes but then fled Moscow,” Erdogan said. “We have completed our duty; the rest is the duty of Mr. Putin and his team.”

The next round of peace talks are scheduled for Sunday at a long-delayed Berlin Conference, where international leaders will attempt once more to end a conflict that has gripped Libya since the fall of former Prime Minister Moammar Gadhafi in 2011.

Though the Moscow talks ended without results, some analysts note that Russian and Turkish leadership in establishing a shaky cease-fire Sunday and bringing the Libyan opponents into negotiations has been a diplomatic victory for Erdogan and his Russian counterpart Vladimir Putin.

“Just like the Astana process in Syria, these talks show that Russia and Turkey are undertaking a parallel, rival diplomacy to the classic diplomacy dominated by the West,” Jana Jabbour, a political scientist and professor at Sciences Po Paris University, told Al-Monitor. “They also showed that Turkey and Russia have become makers and shakers of politics in the region at the expense of the Europeans and Americans.”

Jabbour said Hifter likely backed out of Monday’s talks as he had more to gain from an ongoing ground offensive in which he is betting continued support from Russia, Saudi Arabia and the United Arab Emirates will give LNA forces a long-term advantage. She noted Russian and Turkish would likely seek a de-escalation of violence as neither could afford a drawn-out proxy war in Libya.

Since April 2019, the Tripoli-based government led by Prime Minister Fayez al Sarraj has been fighting off LNA forces with support from Italy, the United States and Turkey. Hifter’s ground offensive initially made slow gains, but increasingly took territory south of Tripoli this fall with air support from the UAE and mercenaries commissioned by the Russian private company, the Wagner Group. In the first week of January, LNA forces claimed the strategic port city of Sirte.

In response to such gains, Turkish officials have boosted strategic and material support for Sarraj’s GNA forces, particularly following a set of accords in November between Ankara and Tripoli vowing to increase collaboration while also demarcating new maritime boundaries between the two nations.

Sedat Aybar, head of the Africa Research Center at the Istanbul Aydin University, said growing support from Ankara and its proxy forces have helped bolster GNA defenses against Hifter’s offensive and changed the balance of power in Libya. Through coordination with Putin, Aybar told Al-Monitor Erdogan “will try to further Turkey's hold in Libya and will work towards a lasting peace deal, which would also include Hifter and the coalition forces he represents.”

He added, “Militarily though, Turkey will not shy away from implementing what is seen as necessary upon the requests from the legitimate government.”

Still, the Russian-Turkish-led peace talks ended without progress Monday largely due to a lack of preparation, said Jalel Harchaoui, a research fellow at the Clingendael Institute. Harchaoui noted discussions on Monday did not address troop positions or delineations for new front lines, with GNA forces seeking a return to pre-offensive lines while Hifter forces aimed to maintain recent gains.

“What emerged yesterday within a few hours was the fact that nobody had actually sat down ahead of the meeting to prepare and address a pretty obvious question … which is where does the LNA go?” Harchaoui asked during a phone interview with Al-Monitor. “Does it stay on the front line? Does it go back to April 4 lines?”

He added, “Those two extremes are both unrealistic because if you keep all the forces on the front line it leaves such a high level of tension that the cease-fire cannot possibly hold.”

Moving forward, Harchaoui said Russian leverage on Hifter's forces would be essential in reaching a consensus at the Berlin Conference and beyond. Apart from military support, he said Russia has been the “economic lifeline” of LNA soldiers, as the Libyan dinars paid out to Hifter's forces are printed in Russia. Since May 2016, he said roughly 12 billion Russian-printed dinars have been sent to Hifter, giving Moscow distinct sway over developments on the ground.

This comes in stark contrast to the leverage European leaders have maintained in Libya, Harchaoui said. Disagreements between Western governments, including Germany, France and the United States, have repeatedly delayed bilateral decisions on the Libyan conflict and postponed the Berlin Conference, which was originally slated to take place in November.

Yet the pending deployment of Turkish troops following parliamentary approval earlier this month has brought new urgency to efforts to reach a sustainable peace resolution.

Until recently, European leaders were mostly “dragging their feet” on Libya, Harchaoui said, “and boom, all of a sudden you have Turkey. They find out on the 27th of November, when those two accords were signed, that the planet was not populated only with Westerners. You have other countries that are non-Western and anti-European.”