Is Erdogan’s ability to turn superpower rivalry to advantage diminishing?

The only thing Ankara can rely on is that the US-Russian conflict will grow to the point where the need to work with Turkey will override any antipathy felt for President Recep Tayyip Erdogan and his government. 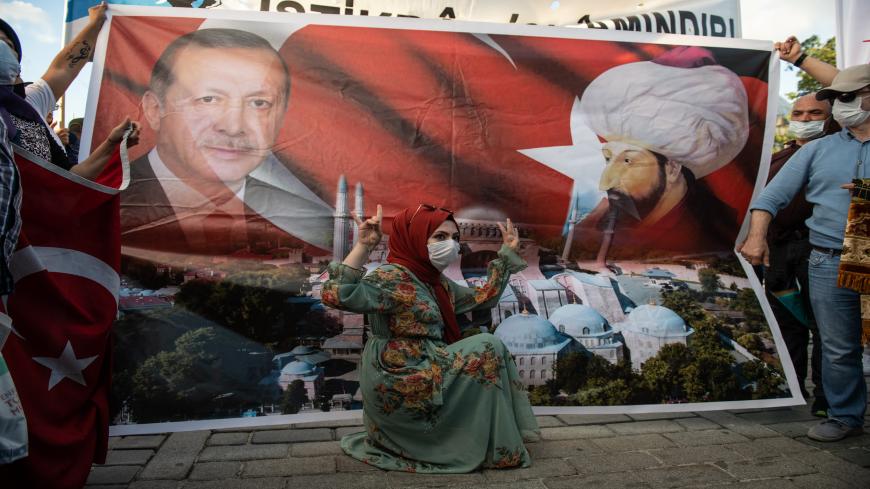 A key factor preventing a total collapse of Turkey’s foreign policy — given Ankara’s growing international isolation — has been President Recep Tayyip Erdogan’s ability to use Turkey’s strategic location, and the differences between regional and world powers.

Erdogan has utilized the rivalry between the United States and Russia in the Middle East and the eastern Mediterranean in particular with relative success as he tries to achieve Turkey’s regional ambitions.

Turkey’s continuing geostrategic value has forced both Washington and Moscow to maintain a working relationship with him despite the serious disputes they have with Ankara over multiple issues.

The personal friendships Erdogan has forged with US President Donald Trump and Russian President Vladimir Putin in the past have also strengthened Ankara’s hand. These have averted serious crises, which could even have escalated into direct military confrontations between Turkish and US/Russian forces, most notably in Syria.

Ankara has also not held back from using its ties with Moscow and Washington against these powers, depending on the occasion.

Turkey relied on tacit Russian support to gain a military foothold in northeastern Syria in order to act against the People's Protection Units (YPG), a US-backed Kurdish militia that Turkey says is a terrorist group.

Today, it relies on US support in northwestern Syria against the Russian-backed Bashar al-Assad regime’s efforts to regain control over the whole of Idlib province. Similarly, Ankara relies on support from the Trump administration in Libya, where Turkey and Russia are also supporting opposing sides.

Such reliance, however, reveals Ankara’s inability to act without some degree of overt or covert backing from either superpower. Many doubt that Turkey would have made any headway in Syria without such support.

Nevertheless, developments point to increasingly difficult times ahead for Erdogan as he tries to push his assertive foreign policy. This also comes at a time when his regional ambitions are growing, and therefore needs some degree of international support more than ever.

To start with, Erdogan’s “bromance” with Putin has lost its previous luster. Meanwhile, the fear that Trump will lose the November elections has gripped official circles in Ankara.

Today, Turkey and Russia behave more like the rivals they always were in Syria and Libya, rather than the partners they pretended to be. Moscow continues to insist Turkish forces leave Syria after the mission they were tasked with, namely to clear jihadist elements from Idlib. Erdogan, however, reiterated earlier this week that Turkey would remain in Syria “until Syrians gain peace, freedom and confidence.”

Clearly targeting Russia, he also criticized the elections in Syria and lambasted those who did condemn these. So, Turkey’s essential problems with Russia in Syria remain unsolved as new differences emerge elsewhere. The sides continue to have differences over the political future of that country and the role that President Assad should play in this.

Turkey’s problems with Russia in Libya are also growing, as the sides slip deeper into a proxy war.

While ostensibly supporting Russian calls for an immediate cease-fire in Libya, Ankara has indicated in so many words that it does not desire this, since it would halt the momentum the GNA has gained in rolling back the LNA.

Foreign Minister Mevlut Cavusoglu recently told the state-owned TRT network that such a cease-fire would be to the disadvantage of the GNA.

Meanwhile, the resumption of conflict between Armenia and Azerbaijan are also likely to cloud Turkey’s political ties with Russia, especially after Ankara vowed to support Azerbaijan by any means necessary.

Although Moscow denies any connection, the recent military exercises Russia held near the conflict zone was noted in Ankara for its massive size and timing.

Retired diplomat Unal Cevikoz, who has served as Turkey’s ambassador to Baku, and who currently holds a key position in the main opposition Republican People's Party, points to the fact that the Armenian border with Turkey is being secured by Russian forces.

“This conflict will inevitably force Armenia to lean more on Russia. There is the possibility that Turkey and Russia will face a new point of instability in their ties,” Cevikoz told the daily Cumhuriyet.

Erdogan’s decision to convert Istanbul’s iconic Orthodox Hagia Sophia Cathedral from a museum into a mosque, has not helped his image in Moscow either. According to a spokesman for the Russian church, the move represents “a slap in the face that the Turkish leadership has inflicted on the Orthodox Church.”

The Russian Sputnik news agency reported that Putin had conveyed to Erdogan, during their phone conversation July 13, “the great social reaction the decision regarding Hagia Sophia had caused in Russia.”

The prospects for Turkish-American ties also appear dim, with Trump losing ground to presidential contender Joe Biden in the lead-up to the presidential elections in November. Biden, who is known for his close links to anti-Turkish Greek, Cypriot and Armenian lobbies in Washington throughout his political career, has had little sympathy for Turkey over the years. He is known to have even less time for Erdogan.

Trump's absence would also remove the main protection against a deeply hostile US Congress where antipathy for Erdogan crosses bipartisan lines.

Despite Trump’s efforts on behalf of Ankara, Turkey has been booted out of the multibillion-dollar state-of-the art F-35 joint strike fighter program on Congress’ behest because of its purchase of Russian S-400 missile defence systems.

Trump has also been reluctant to comply with congressional demands for sanctions to be imposed on Turkey over the S-400 deal under the Countering America's Adversaries Through Sanctions Act (CAATSA).

Biden, as well as many in Congress, are also angry with Trump for enabling Turkey to mount an operation in late 2019 against the YPG in northeastern Syria, lamenting what they see as “a betrayal of America’s Kurdish allies.”

Meanwhile, Erdogan’s decision on Hagia Sophia has also reverberated in Washington. The State Department expressed “disappointment” over the move, while Senate Foreign Relations Committee Chairman James Risch and ranking member Bob Menendez characterized it as a “deep affront to Christians around the world.”

Washington has also made its opposition known to Ankara’s moves in the eastern Mediterranean, where Turkey is involved in a face-off with Greece, Cyprus, Egypt and Israel over hydrocarbon exploration rights. Earlier this month, Washington also raised eyebrows in Ankara after it announced joint military training exercises with the Republic of Cyprus. "This is part of our efforts to enhance relationships with key regional partners to promote stability in the eastern Mediterranean," US Secretary of State Mike Pompeo told reporters.

Many in Ankara believe the latest move by Washington and Pompeo’s remarks were aimed at Turkey. Yet another fear in Ankara is that if elected Biden will interfere in Turkey’s domestic affairs.

In an article for Foreign Affairs earlier this year Biden promised to “bring together the world’s democracies” and to “honestly confront nations that are backsliding.”

Foreign policy analyst Batu Coskun is among those who see no positive outcome for Turkey from a Biden presidency. “The Trump administration’s executive capacity has greatly been weakened by Congress and the established American interests have negated a total rapprochement with Turkey, despite the close working relationship that President Recep Tayyip Erdogan and Trump have formed,” Coskun argued in an op-ed for the pro-government Daily Sabah. “Biden’s willingness to score cheap domestic political gains at the expense of the U.S.’ relationship with a NATO ally — Turkey — does not bode well.”

“Trump, as impetuous as he may be, still offers the better alternative for the future of Turkish-American ties,” Coskun wrote, echoing the general sentiment in Ankara.

Whether Turkey has the military clout and diplomatic acumen to promote its regional ambitions on its own steam, in the face of growing international isolation, remains an open question.

Ultimately, the only thing Ankara can rely on is that the US-Russian conflict will grow to the point where the need to work with Turkey will override any antipathy felt for Erdogan and his government.