Mistrust instead of the spirit of mutually beneficial political cooperation is guiding current relations between Ankara and Moscow. 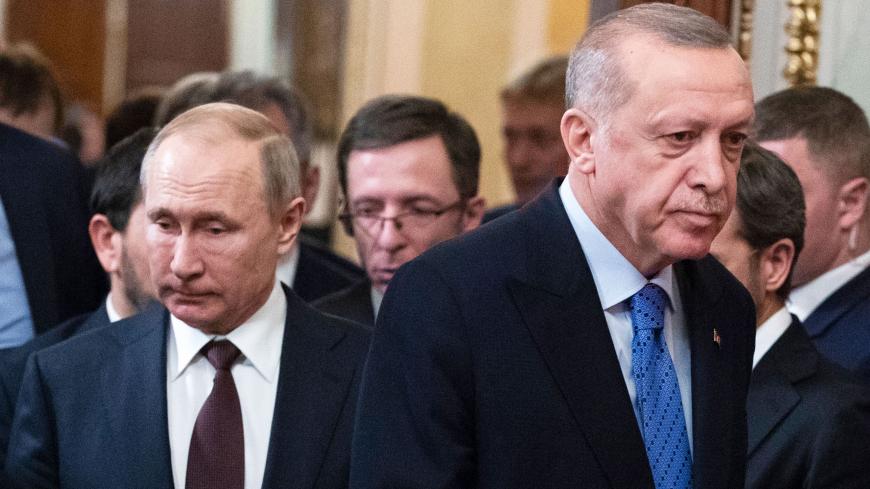 Turkish-Russian ties are following a different trajectory today to what they were a year ago when President Recep Tayyip Erdogan was promoting the notion of a strategic relationship in the making.

Developments in the Middle East, North Africa, the eastern Mediterranean and the Caucasus have shattered that illusion.

“We have never qualified Turkey as our strategic ally,” he said during a radio interview.

“Turkey is a very close partner; in many areas this partnership is strategic,” he added for good measure.

The “strategic areas” in question relate to economic cooperation valued at billions of dollars, which also includes cooperation in nuclear energy and the defense industry.

This, however, still falls short of the strategic political ties Erdogan has been seeking not just as a counterbalance to the West but also as a means to facilitate Turkey’s regional ambitions.

The Turkish public is increasingly aware that it was Russia, in the final analysis, that limited Turkey’s military movements in Syria and Libya, for example, leaving Ankara with much less than what it hoped for.

In a meeting with Erdogan in Moscow in March, Putin effectively drew the line in northern Syria at the strategic M4 highway — Turkish forces were not to cross it.

Turkey might have sought full control over Idlib province north and south of the M4 highway but failed to secure this due to Russian intervention.

Turkey will continue to face pressure in one shape or another from Russia in Idlib, where observers say a highly volatile situation is developing.

Ankara is also wary of Russia’s links to Kurdish groups in northeastern Syria, especially the People’s Protection Units (YPG) which it says is a terrorist organization linked to the outlawed Kurdistan Workers Party.

Moscow raised eyebrows in Ankara in August when it hosted a delegation of Syrian Kurds that also included names linked to the YPG.

The Kurdish issue is expected to remain a thorn in the side of Turkish-Russian ties.

Turkey and Russia are also at loggerheads over Libya, where they support opposing camps.

Russia played a role in preventing Turkey from turning its initially successful military support of the UN-recognized Government of National Accord to advantage.

Khalifa Hifter’s rival Libyan National Army still controls most of the country and its oil reserves. Meanwhile, Egyptian-brokered peace talks, which are also supported by Russia, are underway without any noticeable input from Turkey.

Depending on the course of developments in Libya, Turkey’s plan to use that country as a springboard in its dispute with Greece and Cyprus over energy rights in the eastern Mediterranean could also be in jeopardy, thanks in part to Russia.

Meanwhile, the war between Azerbaijan and Armenia over Nagorno-Karabakh is adding fresh fuel to the brew given that this is one more dispute over which Ankara and Moscow are at odds.

Russia expert Hakan Aksay said he believes Moscow will view challenges posed by Turkey in the Caucuses in a very different light than the situation in Syria or Libya.

“This is Russia’s backyard. A contentious situation between Ankara and Moscow over the conflict in Nagorno-Karabakh could bring ties to a breaking point,” Aksay said in an interview with the T24 news portal.

Moscow made its dissatisfaction clear after Erdogan promised to provide all the military assistance Baku may need until Nagorno-Karabakh is wrested from Armenian control.

"We disagree with the position Turkey has voiced. … There is no secret here, we cannot share the statement that there is ... a military solution to the conflict," Lavrov said during his radio interview.

Lavrov also rejected calls for Turkey to participate in the talks aimed at resolving the Nagorno-Karabakh dispute.

These talks are co-chaired by Russia, the United State, and France under the mantle of the Minsk Group of the Organization for Security and Cooperation in Europe and Moscow wants to keep it that way.

Meanwhile, reports that Turkey is transporting Syrian mercenaries to Nagorno Karabakh have also added to the friction between Ankara and Moscow even though the Turkish side has denied these allegations.

Putin reportedly brought up the topic during his phone conversation with Erdogan last week, which focused on developments in the Caucasus.

The Kremlin statement said Putin had “expressed serious concern over the involvement of Middle Eastern fighters in the military action.”

No mention of this was made by the Turkish side in its statement regarding this conversation.

Meanwhile the S-400 air defense systems Turkey purchased at a great cost from Russia, and tested last week — eliciting an angry response from Washington — are faced with threat of obsolescence even before becoming operational.

This controversial purchase may have been Ankara’s way of showing the West that it has alternatives when it comes to procuring military hardware, but where and how they are to be used remain a mystery.

Burhanettin Duran, who heads the government-funded SETA think tank and advises Erdogan on foreign policy issues, expects regional geopolitical rivalries to increase after the US elections.

“The fact that Turkey is growing stronger will require a difficult type of relationship not just with the West but also Russia,” Duran argued in an article for Sabah.

He underlined that Ankara’s involvement in Libya and Nagorno-Karabakh were particularly discomforting for Moscow.

Moscow also appears to be closer to Greece and Cyprus in Turkey’s dispute with these countries over energy exploration rights.

The Russian Foreign Ministry posted a tweet this week celebrating the 193rd anniversary of the victory against the Ottoman fleet in Navarino in 1827. The tweet said, “193 years ago, the combined squadron of Russia, Great Britain and France defeated the Turkish-Egyptian fleet in the Bay of Navarino. The triumph of the allied fleet became one of the prerequisites for Greece's independence.”

Given its timing, this tweet was picked up in Ankara as a hostile message related to the current standoff in the eastern Mediterranean, where the Turkish navy is flexing its muscles against Greece in a bid to underscore Turkish claims.

The surprise announcement that Russia and Egypt would be holding an unprecedented naval exercise in the Black Sea was also met with alarm in Ankara, where many questioned the object of this exercise.

Erdogan appeared to be reacting to these negative signals from Moscow when he stressed last week that Turkey would never recognize the illegal annexation of Crimea by Russia.

“We have and always will support Ukraine’s sovereignty and territorial integrity, including over Crimea," Erdogan told reporters with Ukrainian President Volodymyr Zelenskiy standing by his side in Ankara on Oct. 16.

Crimea, with its population of Tatars who are related to Turks, remains another fault line in Turkish-Russian ties that could become active overnight depending on developments, much like the current situation in the Caucasus.

The bottom line is that mistrust instead of the spirit of mutually beneficial political cooperation is guiding Turkish-Russian ties today.

“It was impossible not to see from the very beginning that it is difficult for Russia to consider Turkey a friend, an ally or a partner,” said political commentator Mustafa Karaalioglu in his column for the daily Karar.

“While ties with Russia were initially seen as a card against Europe and the US, this has turned into a useless project,” he added.

Retired Ambassador Yusuf Buluc pointed out that the dominant historic feature of Turkish-Russian ties during imperial and contemporary times has always been “competitiveness” rather than “complementarity."

"In the Russian perspective a Turkey that remains a NATO member on paper, but one that is progressively isolated, is strategically much more important than a nonaligned Turkey looking out for partners in structures like the Collective Security Treaty Organization or the Shanghai Cooperation Organization," Buluc said.