The Biden era in Washington is looming as a tough test for Ankara, whose moves will largely determine how the scarred US-Turkish relationship develops. 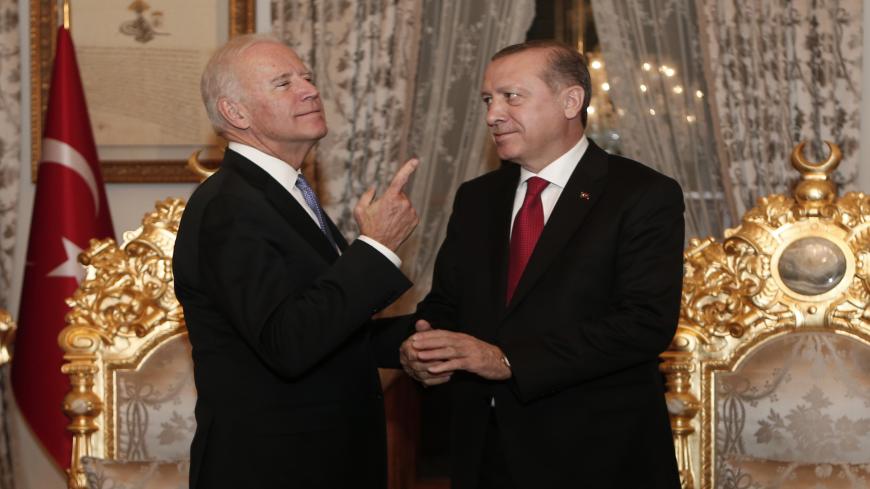 The upcoming Joe Biden administration is bound to profoundly alter the current nature of Turkish-US ties, which have been largely reduced to a peculiar relationship between US President Donald Trump and Turkish President Recep Tayyip Erdogan, both of whom have had an overly personalized approach to foreign policy.

Under the Biden White House, US foreign policy is set to return to a more institutional ground, unlike Trump’s unprecedented style, which was often isolationist, populist and dismissive of international bodies. Judging by Biden’s interviews, statements and writings over the past year, one could conclude that US foreign policy under his leadership will rest on four main principles: strengthening democracy globally, enhancing security cooperation with allies, promoting a globalization protective of the middle classes and prioritizing global free trade in tandem with environmental protection.

The principles emphasized by Biden amount to a reform agenda, both at home and internationally, on the three pillars of the liberal international order — free trade, political democracy and collective security.

Turkey appears to be the subject of heated discussions within Biden’s foreign policy team as it prepares for transition, with two diverging approaches standing out.

The first favors coopting and conciliation. Proponents of this approach see Turkey as an important ally and a key country on NATO’s southern flank that the United States cannot afford to lose or allow to drift away from the Western defense block toward Russia. A harsh American attitude and damaging economic sanctions against Turkey, they believe, could stoke the authoritarian tilt of Erdogan’s government and strengthen its grip on power. Thus, Washington should anchor Turkey in the Western defense bloc at any cost, using economic, diplomatic and security incentives, while pushing the country into a soft, democratic overhaul through smart engagements strengthening the opposition.

Pro-Erdogan quarters, which openly rooted for Trump in the elections, recognize the importance of this approach. Ankara was slow in congratulating Biden on winning the elections, but since its congratulations message Nov. 10, it has turned to full engagement efforts with the president-elect. In a noteworthy article in the pro-government daily Sabah Nov. 14, Burhanettin Duran, head of a prominent pro-government think tank, links Erdogan’s recent pledges for economic, judicial and democratic reforms at home to the advent of “a new era in international politics” in the wake of Biden’s victory.

According to Turkish proponents of conciliation, Ankara can help the Biden administration in efforts to repair transatlantic ties and contain Russia in Libya, Syria and the eastern Mediterranean, Black Sea and Caucasus regions.

Advocates of the conciliation policy appear to have the upper hand in Biden’s foreign policy team. It seems fair to expect that the Biden administration will pursue a conciliatory approach during its first several months in office to test Ankara’s response and shape its policy accordingly. A failure to coopt Ankara could lead it to shift to the alternative approach of confrontation and coercion.

Proponents of that approach, estimated to represent a third of Biden’s foreign policy team, believe in a “stick strategy” against Turkey that would set off with an immediate, comprehensive package of sanctions and draw on coercive diplomacy, including economic, security and political means.

The ground is already there for Biden to follow such an approach. Turkey’s purchase of Russian S-400 air defense systems has landed it in the scope of the Countering America's Adversaries Through Sanctions Act. Even a couple of sanctions under the act could spell serious trouble for Ankara.

There is also the US investigation against Halkbank, the Turkish public lender accused of helping Iran evade US sanctions, which, many in Washington say, could be expanded to implicate members of Erdogan’s family.

Overall, the crisis areas in Turkish-US ties are so many and so serious that Biden and Erdogan will truly struggle to find middle ground. One could list at least nine flashpoints that threaten to mar bilateral ties.

Arguably, the Kurdish question and the prospect of a fresh Turkish military operation against Syrian Kurdish groups stand out as the prime crisis issue. Biden favors dialogue with the Kurds and is known to be supportive of the Syrian Kurdish Democratic Union Party (PYD) and its armed wing, the People’s Protection Units (YPG), which Ankara sees as extensions of the separatist Kurdistan Workers Party, which has fought Ankara for nearly four decades and is internationally designated as a terrorist group. A fresh Turkish military incursion into northern Syria appears quite likely next year to curb the PYD-YPG pair and disrupt its collaboration with the United States.

Second, Biden is likely to remove the brakes that Trump has applied on the Halkbank case, though he is unlikely to personally influence the probe. How the case proceeds might be influenced by what policy Biden adopts on Iran.

The third issue is Turkey’s prospective activation of the S-400s and its ongoing expulsion from the F-35 joint strike fighter program for purchasing the systems. The four S-400 batteries are currently in Ankara, ready for deployment. Washington has threatened sanctions in the case of full activation of the systems. What it means by full activation is the batteries’ deployment to their places of duty and the activation of their radars to begin tracking aircraft. Ankara is unlikely to take that step before Biden assumes his post in January. Moreover, any Turkish decision to cancel activation plans could be used as a bargaining chip in vital eventualities such as a threat of sanctions against Erdogan and his family or tensions over a Turkish military campaign in northern Syria. How Moscow will react to such foot-dragging is another key question that few in Turkey seem to be asking.

Mounting energy rivalries in the eastern Mediterranean and Aegean seas will pose another challenge to bilateral ties. The United States has moved to increase military cooperation with Greece and the Greek Cypriots amid Ankara’s rapprochement with Moscow. Ankara is wary that Biden could take those efforts further. He has already accused Ankara of “provocative actions” in the region.

Turkey’s energy cooperation with Russia, including the Akkuyu nuclear power plant the Russians are building in southern Turkey, is likely to grow into another crisis dossier with the United States in the coming period.

Sixth, Turkish domestic issues could also fuel tensions with Washington amid the deteriorating state of democracy, basic rights and freedoms; the rule of law; media freedoms; and secularism in the country. In July, Biden harshly condemned Erdogan’s decision to convert Hagia Sophia, the ancient Byzantine edifice, into a mosque.

Seventh, the Biden administration would return to institutional dialogue with Ankara, mainly via the Foreign Ministry, but Ankara might balk at such readjustment as all decision-making is now concentrated in the presidential palace.

The rekindled conflict between Azerbaijan and Armenia over Nagorno-Karabakh could also cause frictions between Washington and Ankara, which staunchly backs Azerbaijan. Moreover, Biden has backed moves to recognize the massacres of Armenians under the Ottoman Empire as genocide. “I stand with all Armenians and the Armenian-American community, which has contributed so much to our nation, in remembering and honoring the victims of the Armenian Genocide,” he said in a statement earlier this year.

Finally, the Turkish government’s populist use of anti-American rhetoric is unlikely to be tolerated by Biden as much as the Trump administration did.

In sum, the Biden administration will inherit a raft of major disagreements with Turkey. And even if he tries to moderate ties, Erdogan seems to no longer have a team capable of placing bilateral ties on a healthy track. Ankara’s institutional capacity has eroded so much that meaningful and durable fence-mending might be now beyond its depth.

Moreover, Moscow is likely to turn up pressure on Ankara in Syria, Libya, the Black Sea, the Karabakh conflict and energy issues in response to Turkish efforts to move closer to Washington.

All in all, Ankara seems to be bracing for a tough balancing act between Moscow and Washington next year.