After the killing of Palestinian Iyad al-Hallak by an Israeli police officer, authorities fear conflict is brewing on the Temple Mount. 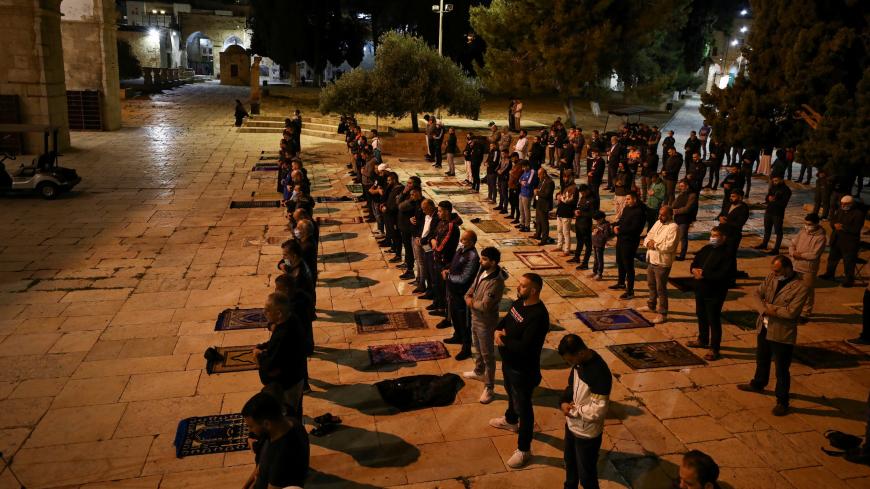 Worshippers pray on the compound housing Al-Aqsa mosque, which is known to Muslims as the Noble Sanctuary and to Jews as the Temple Mount, as it reopened to worshippers after a two-and-a-half month closure due to the outbreak of the novel coronavirus in Jerusalem's Old City, May 31, 2020. - REUTERS/Ammar Awad

The Temple Mount compound reopened on May 31 to both Muslims and Jews after being closed for more than two months. Hundreds of worshippers arrived to the site on Sunday, after the announcement on the opening. Muslims are still not allowed to enter Al-Aqsa mosque. The mosque and the Dome of the Rock remain closed to all visitors, with Muslim prayers held in the open in marked areas. The current instructions for all prayer houses are in place for the Temple Mount, limiting public gatherings to 50 people. Jews are allowed to visit under the usual conditions of entering the complex at specific time slots in the morning and in the afternoon, and without praying.

Hundreds of Muslim worshipers waited outside the gates to the Temple Mount complex at dawn on Sunday, many of them singing, “With blood and spirit we will redeem al-Aqsa." The site had 206 Jewish visitors, including several former Knesset members on the political right.

Leaders of the Muslim Waqf, which manages the site, refused at the beginning of the pandemic to ban Muslims from entry. They changed their minds on March 15 as the virus spread. The Israeli police placed a blanket ban on Jews visiting the site for the same reason. According to some reports, Israel, Jordan (which is also involved in the management of the site) and the Waqf authorities reached an agreement to close the site, with only a handful of Waqf officials authorized to enter. Reacting to these reports, Israeli activists petitioned the court for the ban to be lifted, but the request was rejected.

Israel’s government agreed to reopen prayer houses as of May 20. But the reopening of mosques was delayed until after Eid al-Fitr on May 24 to avoid mass gatherings, with the reopening of Temple Mount compound set for June 1, after the Muslim Eid and after the Jewish Shavuot holiday. Still, the reopening of the site comes at a particularly tense moment in Jerusalem, with police apprehensive over possible conflicts and riots.

On May 30, an Israeli police officer shot and killed autistic 32-year-old Iyad al-Hallak, sparking outrage among Palestinians. Hallak was shot in Jerusalem’s old city, with police claiming he had appeared to be holding a gun. According to reports, Hallak was unarmed and had apparently not understood officers’ orders to halt. The killing of Hallak generated large demonstrations in East Jerusalem, and hundreds of people attended his funeral procession on May 31.

Despite the growing tensions in the city, Israel police reported that the reopening of the especially volatile Temple Mount compound went relatively calmly. Police detained eight Muslims after they allegedly shouted nationalistic slogans at a group of Jews visiting the site, trying to disrupt their visit. But no major conflicts were reported.