Temple Mount closed to both Jews, Muslims over coronavirus

The Waqf agreed to shut down the Temple Mount to Muslims during the coronavirus crisis, in exchange for a ruling that denies Jews access to the site. 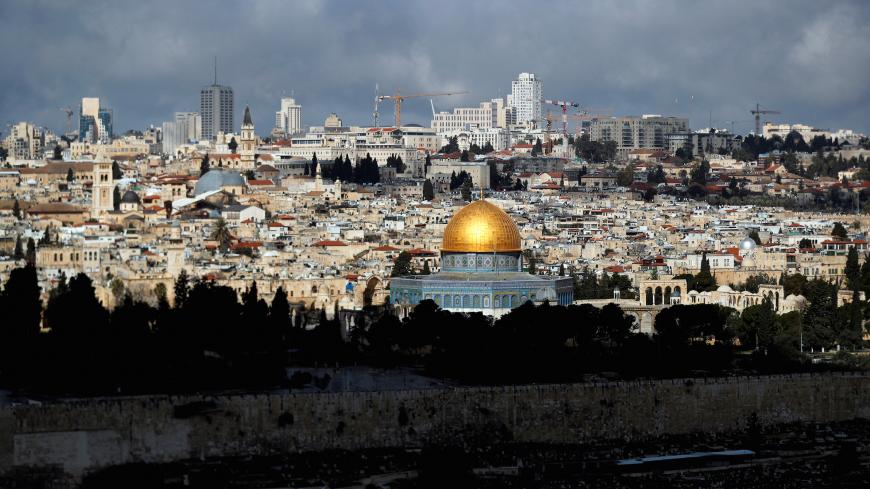 A general view shows the Dome of the Rock in the compound known to Muslims as Haram al-Sharif and to Jews as Temple Mount in Jerusalem's Old City, after Israel tightened a national stay-at-home policy following the spread of the coronavirus, March 20, 2020. - REUTERS/Ammar Awad

The coronavirus pandemic has slammed the brakes on the global economy over the past few weeks, as city centers around the world have emptied out. But it was more than just day-to-day life that ground to a halt. So did international conflicts. As a result of the coronavirus, one of the greatest sources of friction in the Middle East has found itself engulfed in a rare state of tranquility. The entire Temple Mount has been shut down to visitors, worshippers and tourists alike, and now that it is empty, the clashes that constantly plagued the sacred site have all but disappeared.

A worried Israel has been keeping close tabs on events on the Temple Mount ever since the coronavirus broke out across the region. One police source told Al-Monitor on condition of anonymity that serious concerns about mass gatherings at the site were expressed in meetings behind closed doors. He claims that local Muslims ignored Health Ministry directives and hundreds and even thousands gathered to pray in the mosques and outside them. The fear was that this would lead to a coronavirus outbreak in East Jerusalem, which would soon spread to the rest of the city.

Though Israel appealed to the leaders of the Waqf, the Islamic religious trust managing the site, to enforce cautionary measures at the site, they received little cooperation. Then suddenly, on March 15, the Waqf made the surprising announcement that the Temple Mount compound would be closed to visitors in order to prevent the spread of the virus that causes COVID-19. At the same time, the Israeli Police announced that it had placed a blanket ban on Jews visiting the site for the same reason.

Jewish activists who visit the site regularly in order to show a presence there now claim that they were “sold out” as part of a deal between Prime Minister Benjamin Netanyahu and Jordanian King Abdullah. As they imagine it, the deal that was reached banned Jews from ascending to the Temple Mount in exchange for the site being closed to Muslims. According to Tom Nissani, chairman of the group Students for the Temple Mount, “Netanyahu sold us out as part of a deal with Abdullah.” He said that Israel is now preventing a handful of Jews from visiting the site, even though Jewish groups followed all the rules. And it was all in exchange for a ban on large gatherings of Muslims to prevent mass infection. He accuses Israel of paying off the Palestinians by limiting the movement of Jews there, “to save the Muslims from themselves." He added, "What makes the situation even worse is the fact that the Waqf controls who gets into the site, even though it is supposedly closed. Hundreds of Muslims, disguised as workers, visit the site every day and hold prayers without taking any precautionary measures. Meanwhile, Jews are denied access. It is absurd.”

“Haram al-Sharif [the Arab name for the site] has been closed for almost a month and a half,” Muhammad Badran of Jerusalem’s Silwan neighborhood told Al-Monitor. “There are live broadcasts of the prayers on TV. While it is true that people with connections can visit the site with special permits from the Waqf, ordinary people can’t go there.” When asked about the alleged deal between Israel and Jordan, Badran said that it was necessary. “If you tell Muslims that they can’t go up to the Temple Mount because it is dangerous, why are Jews allowed to go up there? That’s why they immediately responded, ‘If we can’t go up, you can’t go up either,” he noted.

Over the past few days, members of Nissani’s group organized several demonstrations near the Temple Mount to demand that Jews be granted access to the site. The Waqf seems to be following these developments in Israel, as evidenced by its stern response this week. Director of Al-Aqsa Mosque Omar al-Kiswani sent a message to Israel, threatening that if Mughrabi Gate is opened to Jewish visitors, the Waqf would open all the site’s gates to Muslims, and that Israel would bear full responsibility for the damage this would cause to public health.

Nissani is concerned about the alleged precedent set by denying Jews access to the site. “Acting stealthily, without any public discussion, the government of Israel has made a cruel decision to deny Jews access to the Temple Mount, all in order to please the Waqf,” he said. “The coronavirus is just an excuse. After making the illegal decision to deny Jews the right of conducting religious rituals at the site, the government is now preventing Jews from making pilgrimage there for all sorts of nebulous reasons. Netanyahu doesn’t care about the Temple Mount, and he doesn’t control the site. It is really controlled by the Jordanians. How ironic that as Israel marks 72 years of independence [April 29], it turns out that it doesn’t really control the site on the ground.”