Will Netanyahu opt for partial annexation?

Some reports say Israeli Prime Minister Benjamin Netanyahu might opt for a phased annexation plan for the West Bank that, at least at first, would exclude the Jordan Valley. 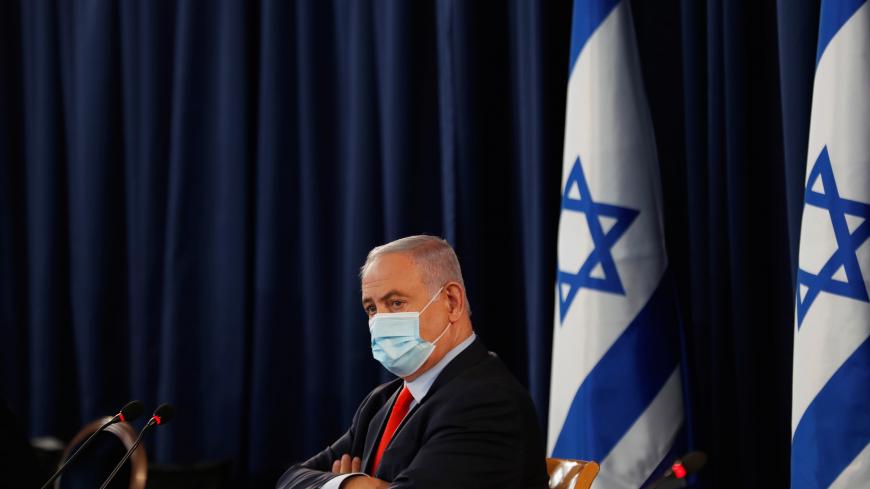 Israeli Prime Minister Benjamin Netanyahu wears a mask as he looks on during the weekly Cabinet meeting in Jerusalem, May 31, 2020. - REUTERS/Ronen Zvulun

A senior American source told Israel’s public radio Kan on June 11 that if Israel’s government opts for limited annexation of West Bank lands, the Trump administration might go along with it. The source said that in such a case, Israel would have to present the administration with a detailed map and explain why it is in Israel’s interest to proceed that way. The final decision is obviously Israel’s, said the source, who specified that the joint Israeli-American mapping committee tasked with drawing up the borders of the Trump peace plan has not yet completed its work.

The source was referring to recent reports indicating that Israel is considering a phased annexation plan. According to these reports, Israel would propose, as a first step, to annex only the West Bank towns of Maale Adumim and Ariel and the Etzion settlement bloc near Jerusalem. Netanyahu would initially announce the annexation of these three blocs but not the Jordan Valley or other settlement areas, it was claimed.

The unity deal signed between Netanyahu and Defense Minister Benny Gantz enables the prime minister to start pushing his annexation plan and bring it to vote as early as July 1. Still, it seems that the members of the mapping committee have been out to the field only once since the unveiling of President Donald Trump’s plan at the end of January. That was in February, just ahead of the coronavirus pandemic. Thus, the committee is unlikely to complete its work by the beginning of next month. Another meeting of the team members is expected next week.

Netanyahu has repeatedly promised to implement Israeli sovereignty over all West Bank settlements and the Jordan Valley as soon as the agreement with Gantz enables him, subject to American approval. At a meeting he held with settlers June 8, Netanyahu confirmed his intention to declare settlement annexation on July 1, but also acknowledged that annexing some other West Bank lands also allocated to Israel under the Trump peace plan will likely take more time.

The Israeli media reported today that the Civil Administration has started preparing for the possibility of conducting a population census for Palestinians living in West Bank Area C, which is under Israeli control. The idea is to collect data on the number of Palestinians living in lands designated for annexation and also to prevent Palestinians from moving there ahead of the annexation with the aim of gaining some sort of a status in Israel.