Italy is expected to approve its largest ever military deal with Egypt despite opposition from some Italian parties. 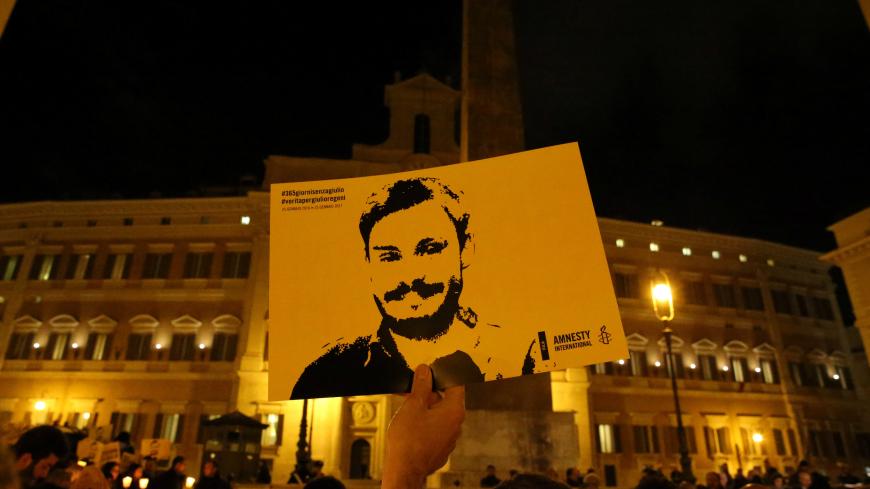 A man holds a placard during a vigil to commemorate Giulio Regeni, who was found murdered in Cairo in 2016, in downtown Rome, Italy, Jan. 25, 2017. - REUTERS/Alessandro Bianchi

It seems the Italian government has temporarily backed away from a military deal with Egypt. Foreign Minister Foreign Minister Luigi Di Maio said on June 10 that his country had not yet approved it, adding that the government is still weighing political considerations and analyzing the deal.

Italy’s news agency ANSA had reported June 8 that the Italian government approved the sale of two FREMM frigates to Egypt and that the top management of the Italian Fincantieri marine industries company was involved in the sale.

Rumors about the approval of the deal came after after a phone call between Egyptian President Abdel Fattah al-Sisi and Italian Prime Minister Giuseppe Conte on June 7, during which they discussed bilateral relations at the commercial, military and energy levels.

According to a statement from the Egyptian presidency, Conte stressed his country’s readiness to boost cooperation with Egypt in various fields.

The reports about the deal were met with wide opposition among Italian rights groups and parliamentarians. The parents of Italian student Giulio Regeni, who was murdered in Egypt, said on June 8 they feel betrayed by the Italian government’s plan to sell warships to Cairo, as they accuse Egyptian security forces of being behind their son’s death.

Giorgio Beretta, an analyst specializing in arms deals at the Permanent Observatory on Small Arms in Italy, told Al-Monitor via email that the two frigates are part of a much larger military deal worth more than nine billion euros (about $10.2 billion). This deal, according to Beretta, is currently under discussion and would be one of the largest sales for Italy since World War II.

The head of Fincantieri, Giuseppe Bono, revealed on Feb. 18 that negotiations were ongoing to reach a deal on the sale of two FREMM frigates valued at 1.2 billion euros (about $1.3 billion).

Speaking June 10 before a parliamentary session, Maio linked the approval of the deal with Egypt to the progress achieved so far in the ongoing investigation into the death of Regeni.

Relations between Egypt and Italy were severely affected by the murder of Italian doctoral student Giulio Regeni, whose mutilated body was found in February 2016 on a road on the outskirts of Cairo.

After Regeni’s body was returned to Rome, an Italian autopsy showed he had been hit hard on the back of his head and suffered multiple fractures throughout his body.

Italy accused the Egyptian authorities of not cooperating in the investigations that have been ongoing for more than four years into Regeni's death. In January, after Conte visited Cairo and met with Sisi, Egypt formed a new team of investigators to work on the case.

The Naval News international website revealed on May 31 that the deal includes two FREMM Bergamini frigates that were originally intended for the Italian navy, in addition to four other frigates that will be specifically built for Egypt.

Beretta added that such a mega deal must be thoroughly discussed in parliament before its is approved, given its direct effect on Italy’s foreign and defense policies.

The Italian Analisidifesa website reported May 18 that the deal was supposed to be announced in April but was delayed due to pressure by prominent members of the populist Five Star movement, which has a parliamentary majority, on the Italian government. Italy's parliament speaker Roberto Fico as well as parliamentarians Alessandro di Battista and Lia Quartapelle reject the deal due to the murder of Regeni, yet to be resolved, also pointing to Egypt's a poor human rights record.

Italian human rights groups are demanding the release of Egyptian researcher Patrick Zaki, who was studying at the University of Bologna and was arrested by the Egyptian authorities upon his return on Feb. 7. Zaki is awaiting trial after he was accused of spreading false news, inciting demonstrations and attempting to overthrow the government. A mural recently painted in Bologna demanded Zaki's release.

However, the Italian foreign and defense ministries had no problem approving the deal with Egypt, Alberto Cutillo, director of the Arms Licensing Unit at the Italian Ministry of Foreign Affairs, said March 3 before a parliamentary committee following up on the issue of Regeni's killing. The committee discussed blocking the deal until the identity of the killers is revealed.

On June 3, the Italian civil society organization Rete Disarmo objected to the possible deal and called on the government to back out.

Beretta opposes the deal, which he considers violates the laws regulating arms trade in Italy. Criticizing Egypt’s human rights record, he asked, “What country would sell such a massive military arsenal to a repressive [nation] that allowed one of its own nationals to get killed?” he said, referring to Regeni.

In February, Italian Foreign Minister Di Maio said that the Italian government has yet to make its final decision on the Egyptian deal but hinted that the government will approve it to prevent the competing French side from seizing the opportunity should the deal with Egypt not materialize.

In a June 3 phone call, the foreign ministers of Egypt and Italy agreed to continue cooperation between their judicial authorities on the case. Spokesman for the Egyptian Ministry of foreign Affairs Ahmed Hafez said in a statement following the call that the two agreed on the importance of advancing cooperation and coordination between the two countries, especially in the economic field, as well as on ways to intensify efforts to address the repercussions of the coronavirus pandemic.

Two former Egyptian diplomats told Al-Monitor that the military deal will help improve the bilateral relations that were affected by Regeni’s death.

Egyptian former assistant foreign minister Hussein Haridi told Al-Monitor that the relations between the two countries have improved. “A country does not sell weapons of such value to another country unless they are bound by strong relations and common interests,” he added.

Rakha Hassan, a member of the Egyptian Council for Foreign Affairs, told Al-Monitor that the Regeni incident is painful but should not define the relations between the two countries. He added that investigations into the Regeni case will continue until the identity of the perpetrators is revealed and that cooperation will be ongoing between the two countries. Haridi said that Italy is looking forward to continuous coordination with Egypt to protect its investments in the eastern Mediterranean, represented by ENI, one of its largest oil companies.

Italy's Eni is the largest oil and gas producer in Egypt, producing about 40% of Egypt's oil wealth, according to statements by Egyptian Minister of Petroleum Tariq Al Mulla in December 2019.

Hassan said that Egypt and Italy both reject Turkey's ambitions in the eastern Mediterranean.

In an attempt deemed to be aimed at improving relations between the two countries, Egyptian Health Minister Hala Zayed accompanied medical aid that Egypt sent to Italy on April 5 in a show of solidarity and support for the Italian government in the face of the coronavirus.

On May 29, La Repubblica quoted a source close to the Italian prime minister as saying that despite many difficulties and obstacles, including Regeni's killing, the arms sale will be the deal of the century. The source added that the deal is not only of commercial and industrial importance for Italy, it also reflects Rome’s desire to build solid relations with Cairo and maintain a political dialogue regarding many issues in the Eastern Mediterranean region.

On May 11, Egypt announced an anti-Turkish international coalition including Greece, Cyprus, the UAE and France to counter Turkish moves in Libya and the eastern Mediterranean regarding “illegal” energy exploration activities. Turkey labelled the coalition as an “alliance of evil.”

Haridi added that the talks between Egypt and Italy are mainly focused on maintaining security in the Mediterranean region and combating terrorism.