As Egypt becomes one of the world's largest importers of arms, Italy is seeking to sign additional arms deals with the North African country despite sour bilateral relations in light of Egypt’s human rights record. 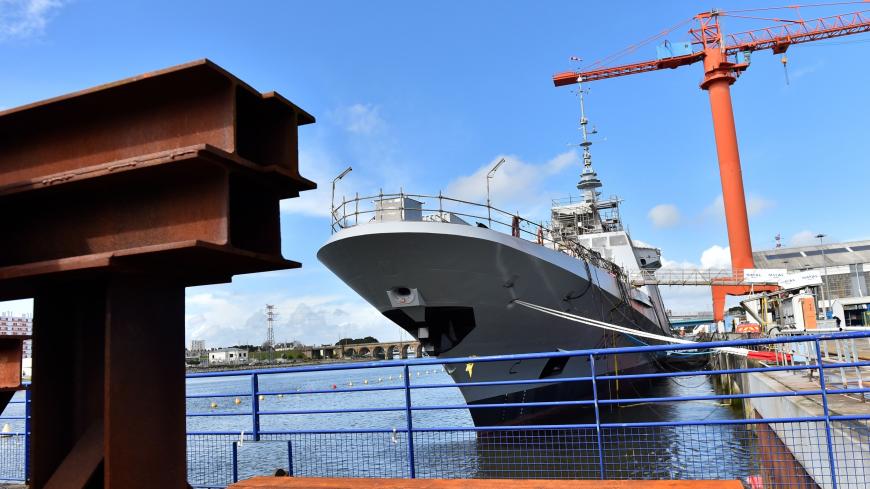 Egypt has agreed to buy two FREMM multipurpose frigates from Italy. The frigates are designed by DCNS/Armaris and Fincantieri for the navies of France and Italy. Here, a frigate under construction at the shipyards of Naval Group (formerly DCNS) is seen March 29, 2018 in Lorient, western France. - LOIC VENANCE/AFP via Getty Images

It seems Italy has insisted on carrying on with arms deals with Egypt despite the tensions that have marked their bilateral relations following the 2016 death of Italian student Giulio Regeni in Cairo.

The Stockholm International Peace Research Institute, which monitors the world’s arms transfers, said March 15 that in 2020 Egypt had received 25 of 50 Aster-15 missiles ordered as part of an arms deal with Italy.

The Aster-15 is a medium-range vertically launched surface-to-air missile designed to offer defense for warships. This type of missile is used on FREMM frigates.

Giorgio Beretta, an analyst for the Permanent Observatory on Small Arms, Security, and Defense Policies based in Brescia in Italy, told Al-Monitor that the missile deal is part of a larger agreement on the sale of two Bergamini-class FREMM frigates that the Italian government gave the green light to in August.

Beretta said, “There is no available information on the value of the missile deal. The next government report on arms exports before the end of the first quarter of 2021 will provide information in this regard.”

The first FREMM Bergamini frigate — which was manufactured by the Italian state-owned shipbuilding company, Fincantieri — was delivered to Egypt in December. The Egyptian navy received the frigate, called al-Galala, at the Alexandria Naval Base.

Italy is to deliver the second frigate to Egypt before the end of 2021. The deal for the two vessels deal is estimated at 1.2 billion euros ($1.3 billion).

The deal was met with wide opposition among rights groups and parliamentarians who tried to block it, but to no avail. Regeni's parents said June 8 that they felt betrayed by the Italian government’s plan to sell warships to Cairo as they accuse Egyptian security forces of being behind their son’s death. In January, they filed a complaint against the Italian government for completing the deal with Egypt.

Beretta said it is unacceptable to deliver to Egypt weapons and military equipment as it contradicts Italian laws regulating arms exports. Beretta — as well as the complaints Regeni’s parents filed — invoked Law No. 185 of 1990, which prohibits the sale of arms to countries whose governments are responsible for serious violations of international conventions on human rights.

Beretta noted that striking military deals with Egypt without taking into account opposing voices does not honor the memory of Regeni or the detained rights advocates and civil society activists in Egypt.

Regeni, a 28-year-old postgraduate student at Cambridge University, went missing in Cairo on Jan. 25, 2016. Nine days later, his body was found dumped by a road outside Cairo suburbs. A postmortem examination indicated that he had been tortured before his death.

Italian investigators suspect the Egyptian security forces targeted him due to his research into the politically controversial topic of independent trade unions.

The murder has caused a diplomatic dispute between Egypt and Italy, with the Italian prosecution accusing Egyptian officials of putting the investigation on the wrong track, which the Egyptian authorities deny.

The Egyptian state prosecutor, Hamada al-Sawy, then cleared the security officers and decided to exclude them from the investigation, saying there is insufficient evidence against them. Sawy said Dec. 30 that his office would temporarily halt the criminal lawsuit into the student’s murder because the perpetrator is unknown and demanded that security checks continue in order to identify the culprit.

The Italian Foreign Ministry described the Egyptian state prosecution’s position as “unacceptable” and pledged to carry on with investigations and raise Regeni's case at various levels, including at the European Union.

Also, Italian human rights groups have demanded that Egyptian authorities release Egyptian researcher Patrick Zaki, who was arrested upon his arrival in Egypt on Feb. 7, 2020. Since then, Zaki, who studied at the University of Bologna, has been awaiting trial, facing charges of spreading fake news, inciting protests and attempting a regime overthrow.

According to Italian reports, Italy is currently discussing with Egypt one of the largest arms sales for Rome since World War II. The potential arms sales to Egypt would be worth between 9 billion to 11 billion euros.

The reported deal would include the delivery to Egypt of an additional four FREMM frigates, 20 offshore patrol vessels, 24 Eurofighter Typhoon fighter aircraft, 20 M-346 jet training aircraft and an observation satellite.

Beretta added, “We have repeatedly said that the matter regarding the two FREMM frigates and the entire issue of arms and military systems for Egypt should be discussed in parliament where the government should report about the military, security and economic features concerning the deal.”

Italy has become a major trade partner for Egypt, while its arms industry has grown to become one of Egypt’s main suppliers, as such sales have increased from 7.4 million to more than 871 million euros from 2016 to 2019, according to annual parliamentary reports.

A former Egyptian diplomat told Al-Monitor on condition of anonymity that Egypt’s relations with Italy are strategic and that the arms deals point to improved relations.

The diplomat praised the Egyptian policy of diversifying its sources of armaments, and said Italy is an important partner of Egypt in the energy-rich eastern Mediterranean region.

Egypt relies on the Italian government-owned ENI, which is the largest gas and oil producer in Egypt, to produce nearly half of Egypt’s petroleum wealth

Despite domestic pressure, Italy sees the military deal with Egypt serving as a guarantee to build strong relations with Cairo so as to preserve an active role in the eastern Mediterranean, a significant hotbed in the region.

Italy is a co-founder of the Eastern Mediterranean Gas Forum, established in January 2019 by Egypt, Cyprus, Greece, Israel, Jordan and the Palestinian Authority, with the purpose of promoting natural gas exports among its member states.

On the other hand, Italy is keen to not lose one the world’s top arms importers. The Stockholm International Peace Research Institute’s March 15 report said Egypt was the third-largest arms importer for 2016-2020. During that period, Egypt’s arms imports grew by 136% compared with 2011-2015, with Russia as the top exporter to the country, followed by France and the United States.