Italian authorities charged four Egyptian police personnel and gave them until today to present evidence in their defense. 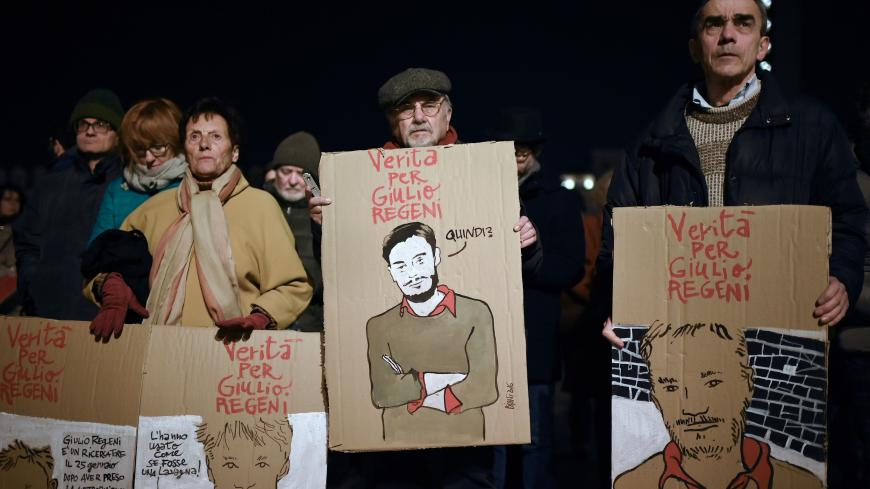 Amnesty International activists take part in a demonstration in Piazza Castello in Turin, Italy, on Jan. 25, 2020, to mark the fourth anniversary since the disappearance of Italian student Giulio Regeni and to demand justice in his death. - MARCO BERTORELLO/AFP via Getty Images

The office of Egypt’s prosecutor general announced today it had cleared five police personnel of any suspicion of involvement in the 2016 murder of Italian graduate student Giulio Regeni in Cairo.

Egyptian prosecutor Hamada al-Sawy’s office said it would not pursue further criminal investigation for the time being, claiming the identity of the perpetrator is unknown. His office also said it would close its investigation into the theft of Regeni’s belongings, saying the men allegedly found in possession of his items were killed in a firefight with Egyptian security forces in 2016.

Authorities in Italy have accused Cairo of failing to cooperate with its investigation into a murder that bore many of the hallmarks of Egypt’s feared domestic intelligence services. Rome’s inquiry found that Regeni’s social research involving Cairo’s trade unions led Egyptian security forces to suspect he was agitating against the government.

Regeni disappeared in 2016 on the anniversary of the 2011 Egyptian revolution after heading out from his apartment to Cairo’s downtown Tahrir Square. A former Egyptian intelligence official later told Italian investigators that Regeni was tortured for days on the grounds of Egypt’s Interior Ministry. Regeni later died under interrogation and his body was dumped in the desert near the Cairo-Alexandria highway outside of the capital, according to this information.

Prosecutors in Rome have cited a witness account that Sherif bragged during a security conference in Kenya that he had personally beaten Regeni. Sherif also offered a monetary reward to at least one of the National Security Agency informants, Muhammad Abdallah, Regeni’s contact in the trade union, Italian investigators found.

Shortly after his death, Egyptian investigators said Regeni had likely died in a car crash. Later, after police killed five men in a van in Cairo, authorities claimed to have found Regeni’s passport and other possessions in an apartment linked to the men, and said he had been kidnapped by a local criminal gang.

Witnesses told reporters that the men in the van, some of whom had criminal records, were executed.

Egyptian state-controlled media also aired video footage taken by an informant showing Regeni had offered to help an independent labor union apply for a $13,000 grant from a nongovernmental organization based in the United Kingdom. Egyptian media cited the video as proof the Italian graduate student was seeking to undermine the government.

The Italian trial of the four Egyptian security officials is set to begin in the spring. They will be likely tried in absentia.