An Italian prosecutor is investigating five Egyptian police officials concerning the murder of Italian student Giulio Regeni while Egypt's own investigation drags on. 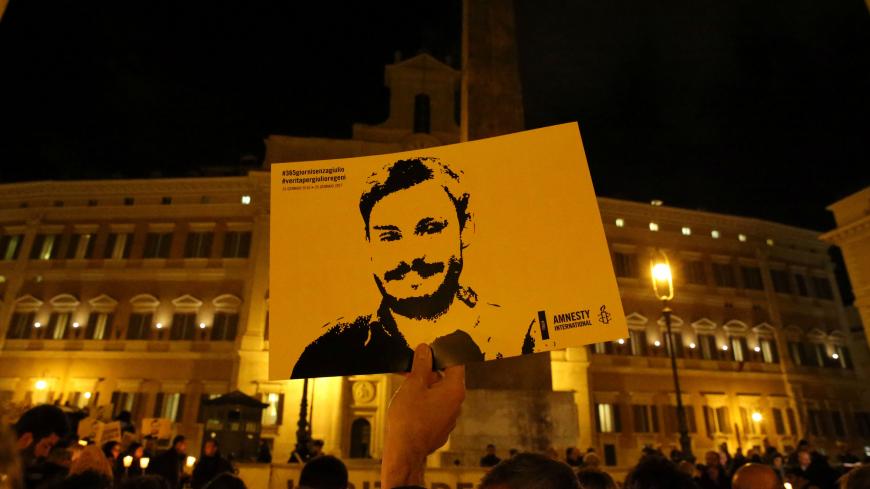 A man in downtown Rome holds a placard during a Jan. 25, 2017, vigil to remember Giulio Regeni, who was found murdered in Cairo in February 2016. - REUTERS/Alessandro Bianchi

Five members of Egypt's national police force are under investigation in Italy in connection to the murder of Giulio Regeni, an Italian researcher whose body was found on the side of a highway in Egypt in February 2016. The news has increased tension in Italian-Egyptian relations, with the Italian side growing increasingly frustrated at the lethargic pace of the Egyptian investigation.

“We have been waiting for three years,” said Interior Minister Matteo Salvini, who is also Italy's deputy premier, in a Dec. 4 statement. “I want to maintain good relations with Egypt and I'll do everything to have good economic, cultural, trade and social relations with a friendly country. But as an Italian, I expect the names and surnames of the culprits.”

From the Italian perspective, the Egyptian authorities have been stingy with information and have frequently deflected attention from the Egyptian security services. Egypt's official position was initially that Regeni had been killed in a traffic accident. But in March 2016, just weeks after Regeni's body was discovered, Egypt acknowledged he had been murdered, but held that it was by a criminal gang whose members had all been killed in a shootout with Egyptian security forces.

The Italian public has grown frustrated with the Egyptian inquiry into Regeni's death. Handpainted signs still hang from some buildings in Milan and other cities calling for justice and the truth around the circumstances of Regeni's demise. Italian authorities believe Egypt is stalling and not providing all the information it holds.

“The general perception is that the Italian government is using the Regeni case to drive nationalist sentiment,” Laura Silvia Battaglia, an Italian journalist and analyst who has worked in both countries, told Al-Monitor. “The relations between the two countries will not be touched, though, due to the mutual industrial interests, including infrastructure, arms and energy.”

Meanwhile, Regeni's parents have come forward and made a statement through their lawyer. The statement, issued Dec. 5, said that their personal investigations have uncovered 20 names — mostly high-ranking officials in the Egyptian National Security forces, the Italian newswire ANSA reported. They said the list could grow to as many as 40 people connected to their son's murder.

A public prosecutor in Rome placed five Egyptians under investigation on Nov. 29. The Italian press named them as Gen. Tareq Sabir, Col. Acer Kamal, Maj. Sherif Magdi, Cpt. Hesham Helmy and Mahmoud Nejm. There are no formal charges against the named officers yet, but they are considered suspects.

Egypt's State Information Service sees the investigation as an affront, saying in a Dec. 5 statement the “charges should be based on evidence and not suspicions.”

The Italian action comes just shy of three years since Regeni's death. In that time, Italy has experienced three different governments. Each has brought up the issue of Regeni with Egypt, but with little or no progress. The Italian public and media have grown exasperated and accusatory.

Regeni was a doctoral candidate at Cambridge in the United Kingdom studying trade unions in Cairo when he disappeared on Jan. 25, 2016 — the five-year anniversary of the uprisings that led to Hosni Mubarak's abdication of the Egyptian presidency after 30 years. The issue of trade unions is sensitive in Egypt, where the military oversees the economy, and the Italian authorities believe Regeni's death may be related to his research. His body was found nine days later on the outskirts of Cairo. His parents later said they could only identify him by the tip of his nose. An Italian forensics investigator revealed that he was tortured before his execution, his body mutilated.

About a year before Regeni's death, a spate of disappearances began in Egypt. The disappeared were last seen in places like classrooms and would later turn up dead. Others have occurred since. Many are believed to have been outspoken critics of government policy. The police were widely believed to be behind these disappearances but the state did not confront the security forces. In April 2016, Rome recalled its ambassador to Egypt, citing the Regeni case. However, a new envoy was named a year later.

Italian and Egyptian prosecutors met in early December but failed to produce anything of note. Relations between the two nations will continue to be strained as long as no answer is unveiled. Italy seems determined to proceed with the investigation regardless of Egypt's wishes.

“Today, we can say that [Egyptian] control [over the investigation] has led to an insufficient judgment, at least in determining an ascertaining of the facts that took place,” reads a Nov 28 article in Italian daily Corriere Della Sera written by Giovanni Bianconi. But all the Italian governments have been able to obtain are “vain promises,” Bianconi said.