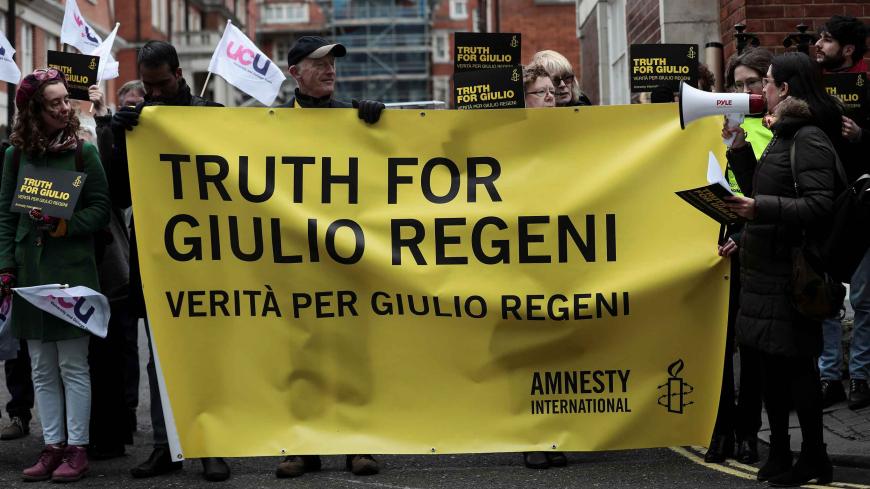 Demonstrators from Amnesty International hold placards outside the Egyptian Embassy in London on Feb. 2, 2018, in support of Italian student Giulio Regeni, who was found murdered on the outskirts of Cairo in 2016. - REUTERS/Simon Dawson

CAIRO — Tired of waiting for action from Cairo, Italy has named five members of Egypt's security forces as suspects in the torture and murder of Italian doctoral student Giulio Regeni, whose mutilated body was found in February 2016 on a road on the outskirts of Cairo. Meanwhile, Egyptian officials are pondering the potential ramifications of what Italy sees as foot-dragging.

The case has always strained relations between the two countries, and tensions rose Nov. 29 when the Italian parliament decided to sever ties with its Egyptian counterpart, citing a lack of progress in the joint investigation. That day, the public prosecutor's office in Rome said it is officially investigating five suspects. They have been identified as Lt. Gen. Tareq Saber, Maj. Sherif Magdi, Col. Hesham Helmi, Col. Aser Kamal and junior police officer Mahmoud Nagm.

In a Dec. 5 press conference, Alessandra Ballerini, the lawyer representing Regeni's family, said Italian forensic investigators and a legal team have been collecting information since his body was found. She said the list of suspects was made following a thorough investigation with a legal team in Egypt. Nevertheless, on Dec. 3, Egypt had declined to press charges against the security officers, saying the evidence was insufficient.

Rakha Hassan, a member of the Egyptian Council for Foreign Affairs, thinks otherwise.

“The security agencies are undoubtedly trying to cover up for an entangled high-ranking member of the security apparatus," said Hassan, adding that Egypt's approach to the Regeni crisis has been wrong and naive. He believes Egypt’s strained relations with Italy will have a negative impact on bilateral cooperation, particularly in tourism.

Egypt's legislature issued a statement Nov. 30 in response to the Italian parliament's decision to break off ties. The statement said the unilateral action was "unjustified," and legal matters shouldn't be politicized: "It neither serves the two countries’ interests nor helps reveal the truth and bring about justice."

Emad Gad, a member of the Egyptian parliament’s Foreign Relations Committee, believes political tension prevails over the countries’ bilateral ties. Speaking to Al-Monitor by phone, Gad said the Italian parliament’s decision creates a negative loop, given its potential repercussions on the countries' ongoing talks regarding multiple issues such as illegal immigration and resolving the Libyan conflict.

Gad noted that the Libyan issue is an international one, and therefore Egypt’s cooperative efforts are with the European Union in general and not only with Italy. Yet "Cairo and Rome have different standings toward the Libyan issue. Continued escalation by Italy in the Regeni crisis would reduce the two sides’ opportunities to find common ground," Gad said.

As for economic issues, “I don't believe that a major impact would be seen on economic ties between Cairo and Rome. The bilateral trade exchange is governed by economic interests between the two countries."

But Gad pointed out that Egypt can't afford to lose a country of Italy’s size as a friend, and he noted that the Egyptian security agencies’ lack of transparency in the Regeni case has exacerbated the crisis.

Mohamad Sadeq Ismail, director of the Arab Center for Political and Strategic Studies in Cairo, also emphasized Italy's importance as a trade partner and said Rome's escalation in the Regeni matter will reflect poorly on cooperation between the two countries.

"The freeze of parliamentary relations is an irresponsible measure that will affect the talks on Libya," he told Al-Monitor by phone. "Italy can't move ahead with the Libyan dossier without involving the Egyptian side.”

However, Ismail believes ties between Cairo and Rome are bigger than the Regeni case. He stressed the need to leave legal matters to the judiciary, apart from political stances, and ruled out the possibility that the Egyptian government will respond to Italy's demand for indictments against security members.

Some human rights advocates say Egypt has been standing in the way of the investigation. For example, in September 2017, Egyptian authorities took into custody an Egyptian lawyer, Ibrahim Metwally, who was helping the Regeni family with the case. Metwally, founder of the Association of the Families of the Disappeared, was charged with “communicating with foreign entities to harm state security," “establishing an illegal organization” and “disseminating false news." He is still being held in a maximum security compound, and "his pre-trial detention is systematically renewed every 45 days."

Regeni was a 28-year-old doctoral student from Cambridge University in England. He was living in Cairo while he conducted academic research on the country's independent labor unions, a controversial topic. He disappeared in January 2016. His body was found about a week later, on Feb. 3. An autopsy showed he had been tortured extensively in a manner consistent with security authorities' alleged methods.