The return of Italy’s ambassador to Egypt more than a year after the torture and slaying of Italian student Giulio Regeni in Cairo heralds new opportunities for cooperation between the countries. 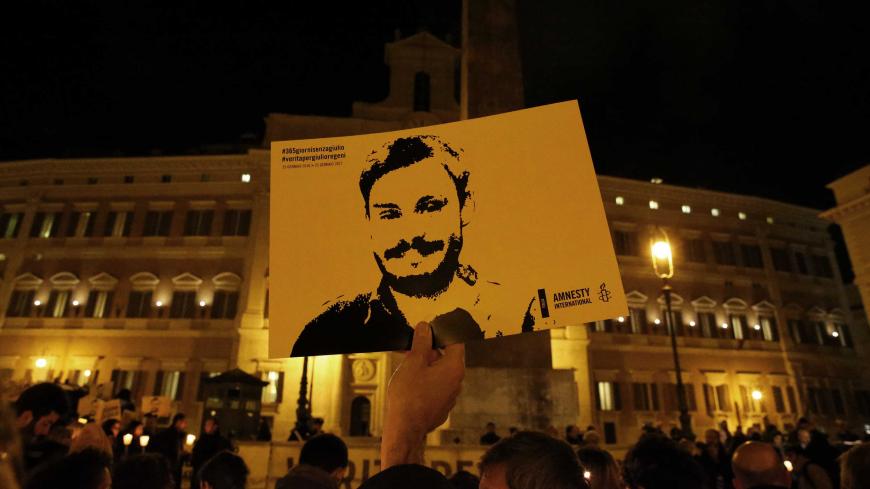 A man holds a placard during a vigil in downtown Rome, Italy, to commemorate Giulio Regeni, who was found murdered in Cairo in February 2016. Photo posted Jan. 25, 2017. - REUTERS/Alessandro Bianchi

CAIRO — A murder that led Italy to recall its ambassador to Egypt last year remains unsolved, but the countries are once again engaging in diplomatic relations by restoring ambassador positions and promising to cooperate on a continuing investigation of the death.

Egypt refused, and still refuses, to admit that members of its police force were involved in the torture and murder of Italian doctoral student Giulio Regeni, despite overwhelming indications that they were. His brutalized body was found Feb. 3, 2016, in a ditch outside Cairo. Italy rejected the results of Egypt's investigation and disproved multiple scenarios the government put forward to assign blame elsewhere. Eventually, Egypt admitted that Regini had been under surveillance before he disappeared Jan. 25.

Rome recalled its ambassador in April 2016. As for Egypt's ambassador to Rome at the time, he remained there until retiring in June 2016. Egypt named his replacement, Hisham Badr, but the Italian Foreign Ministry postponed Badr's official appointment until Rome returned its ambassador to Cairo this month. Rome has assigned Ambassador Giampaolo Cantini to Cairo and accepted Badr, indicating improved relations after more than a year of Italy's icy contempt.

Egyptian Foreign Minister Sameh Shoukry and his Italian counterpart Angelino Alfano expressed their desire during a Sept. 14 meeting in London to develop political, economic, military and security relations. After the meeting, the Egyptian Foreign Ministry said the two countries seek to counter illicit migration and fight terrorism. They also plan to cooperate in the energy sector, with production to begin soon at the offshore natural gas site Zohr field in the Mediterranean, under the supervision of Italian oil company Eni.

Shoukry confirmed during the meeting Cairo’s readiness to remove any obstacles facing Italian investments in Egypt and his wish for Italian tourism to return to Egypt.

Analysts told Al-Monitor that Egypt and Italy have come to terms with Regeni’s death and are seeking to cement their relations.

A former Egyptian assistant foreign minister for Gulf affairs, Ahmed al-Quesni, told Al-Monitor by phone, “The two countries have overcome the Regeni crisis and learned that it is important to protect their interests and maintain diplomatic and economic cooperation in the coming phase, especially as the crisis froze cooperation for a while.”

Quesni added, “Relations between Italy and Egypt are historical, and there are large investments between them. Italy is Egypt’s second [largest] trade partner after the US. Moreover, Eni Co. is handling the extraction of petroleum from Zohr field in the Mediterranean. Their relations are important, and Regeni’s death was not expected to shake them that bad. But it took a while to understand Egypt’s stance and for the two countries to realize how to negotiate and solve their pending problems through active and open diplomacy.”

He also said, “Economic and trade relations between the two countries might improve in the future, and Egypt might be able to export its production to Italy and benefit from the decline of the Egyptian currency against foreign currencies.”

Trade volume between Egypt and Italy rose 30% to 1.3 billion euros ($1.53 billion at today's exchange rate) in the first quarter of 2017, according to a June 29 statement by Egyptian Minister of Trade Tarek Kabil.

Improved relations with Italy are also expected to boost tourism for Egypt. Alaa el-Ghamry, a board member of the Egyptian Travel Agents Association, told Al-Ahram newspaper that the Italian ambassador's return will also ease tensions between the countries and help rectify Egypt's image abroad.

The nongovernmental Italian Tourism Association had decided in April 2016 to suspend its flights and stop all its activities with Egypt. The deputy head of the government's Egyptian Tourism Authority, Ahmed Hamdi, refused to tell Al-Monitor how much Egypt's tourism sector was affected by the Regeni case and claimed there were “special security considerations” to take into account. He said the return of Rome’s ambassador to Cairo will boost the influx of tourists, which has started to pick up recently.

Egypt's Central Agency for Public Mobilization and Statistics said in its 2015 annual booklet that Italy ranked No. 6 among countries whose citizens visit Egypt the most.

Tareq Fahmy, a political science professor at the University of Cairo, said the return of diplomatic representation between Egypt and Italy represents “a new page.”

He told Al-Monitor, “Egypt and Italy have common interests that necessitate quick cooperation, especially regarding the Libyan [civil war] crisis. Italy wants to cooperate with Egypt on this level to protect its national security and also wants to address illegal migration that is harming Italy with the massive influx of migrants through the Mediterranean Sea. Italy and Egypt are also aiming to improve their economic relations.”

"Egypt’s judiciary and legal bodies also cooperated by presenting reports and evidence that investigation authorities in Italy had asked for,” said Fahmy. He said Italy hasn't closed the Regeni case, but both countries want to improve relations while the investigations continue.

Fahmy concluded, “The two countries have put their interests above the dispute in Regeni’s affair.”